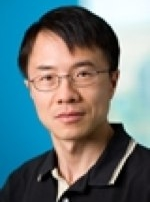 At the Web 2.0 Summit in San Francisco today Microsoft’s President of Microsoft’s Online Services Group, Qi Lu, spoke with Tim O’Reilly. He hit on some of his overall goals with Microsoft and search, but the real story was clear: The deal between Microsoft and Twitter to inject real-time tweets into Bing’s results. Yes, the deal is real and it’s a key part of what Microsoft is calling “Bing Wave 2.”

Another part of Bing Wave 2 is Facebook data, but that will come later, and it’s vague as to how that will work. Today was all about Twitter as Lu introduced another Microsoft employee who works under him to demo the new version of Bing (screenshots below).

The demo results were impressive. It’s like a better version of Twitter search because it has more options and Microsoft has access to Twitter’s entire (public) feed of tweets to work with. With Bing, when you do a Twitter search, you will see both the most recent tweets, as well as the top links that are being shared dealing with whatever query you made.

And the most recent tweets come into Bing in a constantly updating realtime feed (there’s a pause button for it too). There is also a retweet button to easily retweet and tweet you see in the results.

Lu would not disclose what the financial terms were for this deal, but he did imply there was one. He also noted that the deal is non-exclusive. That’s important as there are also rumors floating around that Google is working with Twitter on a similar deal.

Bing with Twitter is live now, you can find it here. 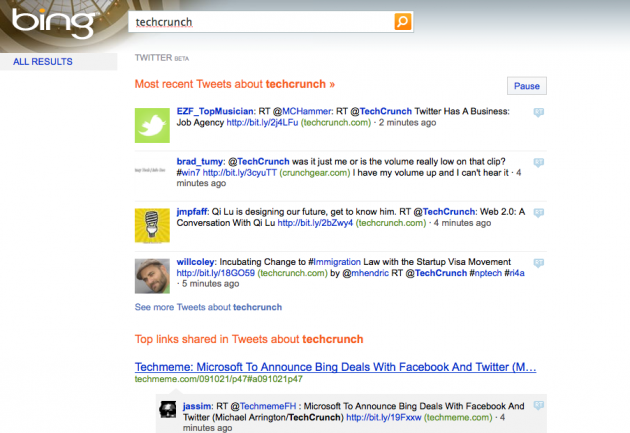 Below, find the full Q&A (paraphrased):

TO: Why go to Microsoft (from Yahoo)?

QL: I left Yahoo simply because I had been there a long time (10 years). I told Jerry that was a long time. I sat around awhile, then decided to go with Microsoft. I took it mainly because I had the opportunity to have a big impact. We launched Bing about 5 months ago and we’re seeing good traction.

TO: Are you gathering new forms of data to help users? Is the strategy to be better than anyone than giving users what they want from many different pipelines?

QL: Yes, that’s our long term goal. In the early days of search, queries were largely about navigational results. Engines are now good at finding web pages. But we need to get better at determining user intent. The web has a lot of stuff like Flickr images; images are very important in search results, not just as separate queries.

TO: With Bing you got good momentum, so what’s next?

TO: Any truth to those rumors about your deal with Twitter?

QL: To answer the question let’s do a demo. 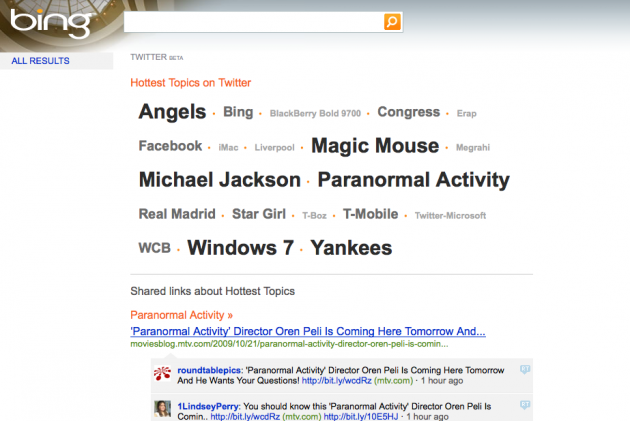 This is what we call “Bing Wave 2.” One big thing is visual search which we showed off last month. Visual search helps a lot for things you that regular search queries may not help with, like shopping for a camera. And top iPhone apps.

But the real big part of Bing Wave 2 is about real-time information. Today we’re making two announcements. We’re going live with a beta shortly after this announcement. First is a strategic announcement with Twitter. We have access to all the Twitter information in real-time. Ev Williams and Dick Costolo have been great partnerss. The other partner will be Facebook – that’s coming at a later date.

But the big partnership is Twitter. You’ll remember in Bing Wave 1, we had some Twitter integration for some users, but this is much bigger. We have access to the full (public) data feed. You can see the full feed of tweets natively in Bing experience, and this updates in real-time.

But this isn’t just about the most recent tweets, we also have “best match” to search the tweets. We do de-duping, to get rid of repeats. Then we focus on the quality of the results, based on relevancy. One way to to see how many people follow a user. We also look for context, maybe they have a link in the tweet that is relevant. And if a tweet is being retweeted a lot, we loot at that.

We also filter out spam and adult items that shouldn’t be in results. We also have the “hottest topics on Twitter,” which is a tag cloud that you can click on to dive in. A real key is to look at the links. We look at what’s buzzy and show those to you.

And with Bit.ly URLs we will show you the domain of where you’re going to land, so you aren’t tricked.

Basically, that’s a quick peak. Remember, this is just in beta, but it should be live in a few minutes. In an hour it should be fully up and running. http://bing.com/twitter is how you find it. 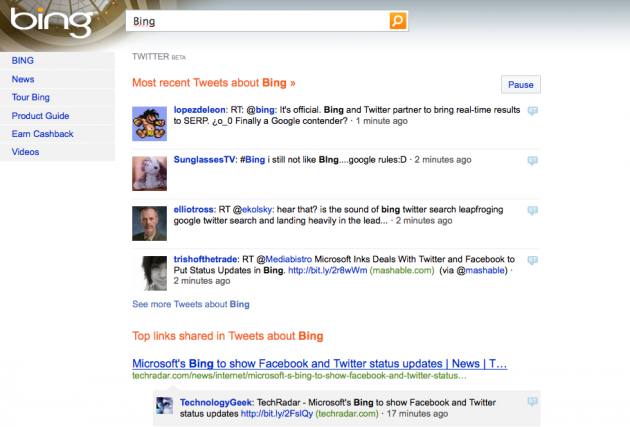 Back to the Q&A

QL: We’re very excited about the Twitter deal, but remember that’s just one part of what we want to do.

TO: I had to ask. What about length of the deal?

QL: I’m not sure, but this is a win-win and there will be other partnership.

TO: If your goal is to build a mind-reader, you’re going to have to learn a lot more about people. Privacy concerns?

QL: Great question, again this is just the beginning. There’s a lot of signal from Twitter, but the signal is still evolving. We can use them to augment today’s search experience, but it’s very early for what we want to do with this. When you lower the barrier for consuming information, it’s great.

TO: Are you keeping the Twitter stream? Is Microsoft archiving these?

QL: I’m not going to answer that cause I’m not sure yet.

AQ: In your deal with Yahoo, can you talk about the data sharing? Is the Twitter deal non-exclusive?

QL: The Twitter deal is non exclusive. With Yahoo, we’re working together with them to make sure we protect both sets of users with this data.

TO: What’s the value of the data you’re getting from Yahoo?

QL: The scale of search from Yahoo is the key. What we want to do is data-driven, they have a larger footprint in search, so we can do more with more data.