While Facebook continues to grow, and some companies are getting more comfortable with using it for things like Pages, LinkedIn still fills the gap for users who want a more professional setting for social networking. A new service launching in public beta today at TechCrunch50, Radiusly, wants to take the idea of Twitter and put it in more of a professional setting, as well.

But unlike Facebook and LinkedIn which exist as two totally separate networks, Radiusly wants to integrate its service with Twitter. Users will be able to publish an update they leave on Radiusly to Twitter (and Facebook, as well). But the key selling-point is that in the Radiusly environment you can also do much more, such as have a professional profile, resume, sample works, and photos.

Ideally, a Radiusly users would be someone who loves the concept of Twitter, but wants to be able to maintain their work-related tweets in a separate environment, where they could also share other professional information. As more and more companies wake up to the idea of using Twitter as a means of communication, a service like this could be compelling to them.

Of course, there is a lot of competition out there for the business Twitter market. Aside from startups like CoTweet, (TechCrunch50-alum) Yammer, and Blellow, Radiusly could be looking at both LinkedIn and Twitter itself making more moves into this arena shortly. We already know that Twitter is gearing up some professional tools for businesses to use, but whether those will be things similar to what Radiusly offers, no one is sure yet. Meanwhile, if LinkedIn wanted to, it could easily make itself Twitter-centric. It doesn’t appear that they are going to do that, but you never know.

Radiusly plans to using a subscription/freemium model, offering some services for free, while charging a subscription fee for others. There will also be sponsored search listings, job listings, and banner ads to bring in revenue.

CEO Chris Sel and VP of Business Development Adarsh Pallian presented it today at the conference.

RS: I think you’re aiming at the right target, but you hit the wall. Brands tell me they won’t want to advertise on Twitter. You’re just not there yet, I’m not sure why.

RH: In a rare position, I agree with much of what Robert was saying. The real key is how do you exchange information on Facebook, Twitter and LinkedIn, not that they need a new way to search for some of this.

DC: I agree with Robert and Reid, I don’t really get why I would go there. I kept trying to figure it out, to be fair when Twitter first launched I didn’t get it either, now I work there.

C: I gotta be Simon Cowell too. I can’t see why someone would need this. 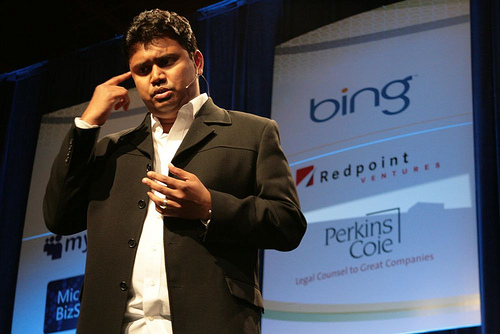 Other Coverage:
TC50: Radiusly says companies should forget Twitter, microblog with us instead VentureBeat.