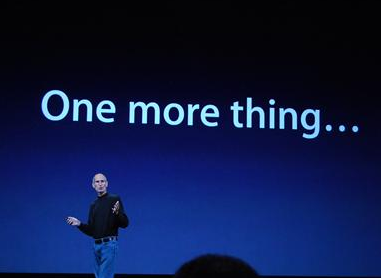 There’s been a big brouhaha over comments Steve Jobs made to NYT’s David Pogue in an interview following Apple’s event on Wednesday. Basically, most people are interpreting what Jobs said about eBook readers to mean that Apple plans to completely stay away from the market. But that’s not actually what Jobs said at all.

How do we know? Because before Pogue re-wrote his interview, he posted the transcription of the Q&A, which still resides in Google’s cache. Here’s the relevant part:

Q: Has your opinion of e-readers changed?

A: I’m sure there will always be dedicated devices, and they may have a few advantages in doing just one thing. But I think the general-purpose devices will win the day because I think people just probably aren’t willing to pay for a dedicated device. You notice Amazon never says how much they sell; usually if they sell a lot of something, you want to tell everybody.

We don’t see that it’s a really big market at this point. And in the future, the more general-purpose devices will tend to win the day.

I’m not sure that Amazon, as an example, really cares that much about being in the hardware business. If I were Amazon, I’d love selling stuff where I didn’t have to have a warehouse, didn’t need UPS.

Translation: We’re making a tablet, and eBooks will be a part of those.

Jobs isn’t saying Apple isn’t interested in eBooks, he’s saying that Apple isn’t interested in making a stand-alone eBook reader. And they shouldn’t be. While the devices will exist for a while, eventually the thought that this won’t be a functionality wrapped into other devices is silly. Why carry around multiple devices when you can carry around one? That’s kind of Apple’s thing, isn’t it?

Basically, a lot of people are wrongly translating Jobs’ thoughts about eBook readers as eBooks themselves. eBooks are a huge portion of the App Store, why wouldn’t Apple want to expand their support of them? They do, and they are. It’s just going to be on their tablet device or their other devices, not some stand-alone reader.