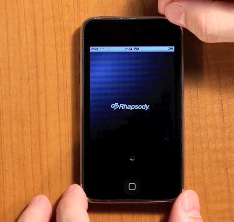 This morning, subscription music service Rhapsody is putting public pressure on Apple to approve its new music streaming app by making its case directly to the press. Unlike other streaming music apps already on the iPhone from Pandora, Slacker, AOL Radio, imeem, and Sirius XM, Rhapsody’s would allow users to individually select and listen to any one of the 8 million songs in its catalog on-demand or create their own streaming playlists, as opposed to listening to a more radio-like, random assortment. It is in the same boat as Spotify, which is also awaiting approval for its music-streaming iPhone app.

In the wake of the Google Voice app rejection/indefinite review and the resulting FCC investigation, Rhapsody is betting that Apple won’t reject its App, even if it does compete directly with iTunes. Rhapsody VP Neil Smith tells the NYT that “not approving things for the app store is giving people a reason to say, ‘I’m not going to buy an iPhone.’”

Smith gives Rhapsody a little too much credit. It is a great product, don’t get me wrong. But paying $15 a month for unlimited access to Rhapsody’s Web jukebox appeals to a very limited niche audience. (The iPhone app, while nominally free, only works for Rhapsody subscribers under that $15 plan). Rhapsody America, which is a joint venture between Rhapsody’s parent Real Networks and MTV Networks, only had 750,000 paying subscribers at the end of June, and that was down 50,000 from the March quarter. In early August, Rhapsody laid off 12 people, or 9 percent of its workforce. Now it really seems to betting on this mobile thing, so getting on the iPhone is pretty important.

But this isn’t going to be like the Sirius XM app, which took off and is currently the No. 3 music app in the iTunes store (after Shazam and Pandora Radio), despite also requiring a pre-existing, paid subscription. Sirius XM Radio has 18.4 million subscribers. Making an iPhone app just for them makes a lot of sense. In contrast, making an iPhone app for Rhapsody’s 750,000 existing subscribers is not going to make much difference.

Unless you are already a Rhapsody subscriber, you are not going to download the app. It won’t work. And there are plenty of free music, streaming alternatives (Pandora, Slacker, imeem, AOL Radio, etc). Rhapsody is certainly more fully featured, but is the difference really worth $15 a month? Most people on the Web have decided that it is not. There is no reason to believe that a mobile version without download backups will be any different. And since it depends on a network connection, you are out of luck if that goes down or you are out of range.

So it is really not that much of a threat to iTunes or the iPod functionality of the iPhone. And actually, as Pandora Radio has proven, streaming music on the iPhone can help drive music download sales. Of course, Rhapsody has its own MP3 download music store, which Apple doesn’t like one bit.

But, like I said, nobody is going to use this app anyway. So Apple can approve it and use it as an example that it is pro-competition the next time the FCC comes calling, while not really risking much of anything at all.