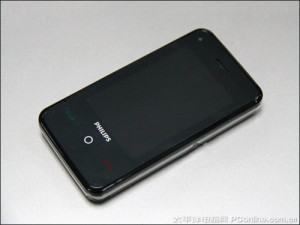 It may be that we’re entering an era of lozenge-shaped phones with little to distinguish them from one another, but that doesn’t mean phone makers shouldn’t even try. Honestly, if your phone looks and acts like every other phone and its specs are for the most part the same, why did you put it out?

Philips’ V808 is their first Android-based smartphone, so I guess you can’t blame them for sticking to the basics. 3.2-megapixel camera, 320×480 touchscreen, the usual business. There aren’t any photos of the phone when it’s on, but the article seems to say there’s some widget functionality, though they could just be talking about the normal Android stuff.

[via Cloned in China and Engadget]