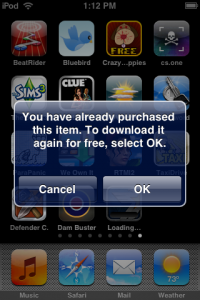 The web threw a hissy fit a couple weeks ago after some screenshots of the iPhone 3.0 beta software indicated that you would have to re-purchase apps that you had removed from your iPhone or iPod touch. But it looks like everyone can calm down now. In the latest iPhone 3.0 GM build, which went live shortly after the WWDC keynote on Monday, the ability to re-download an app you’ve already purchased, looks to be have been restored.

The blog AppAdvice did some digging and found that the new iTunes 8.2 software apparently includes some logic which allows it to tell exactly which iTunes account is authorized for app purchases made. This is to prevent users from sharing apps by signing out of one iTunes account and into another one on the iPhone itself.

As was previously reported, with the iPhone 3.0 beta builds you could re-download apps for free on iTunes on the computer, but if you tried to do it on the device, you were prompted to buy it again. With the 3.0 GM software, after you sync it with you iTunes account, you will see the previous “You have already purchased this item. To download it again for free, select OK.” dialog.

It makes sense, Apple doesn’t want people swapping apps back and forth without paying for them, so it’s requiring that you tie your iPhone or iPod touch to the iTunes account on your computer that you bought the app with. The previous versions of iTunes simply didn’t have that pairing ability fully intact, but the 8.2 version does. And it works with the 3.0 GM. So, end of controversy.