As newspapers and other publishers watch their revenues diminish, one common refrain among them is that maybe they should somehow go after Google or Yahoo for aiding and abetting the destruction of their businesses and sometimes the wholesale theft of their content. We’ve seen how the Associated Press wants to handle this: by aggressively going after anyone who even borrows a headline. Today, a consortium of other publishers including Reuters, the Magazine Publishers of America, and Politico are taking a more measured approach, but one which will no doubt still be controversial. They are forming the Fair Syndication Consortium, which is the brainchild of Attributor, the startup which tracks the reuse of text and images across the Web for many of these same publishers.

I know a little bit about this because in January I was invited to a meeting at the A.P.’s headquarters with about two dozen other publishers, most of them from the print world, to discuss the formation of the consortium. TechCrunch has not joined at this time. Ironically, neither has the A.P., which has apparently decided to go its own way and fight the encroachments of the Web more aggressively (although, to my knowledge, it still uses Attributor’s technology). But at that meeting, which was organized by Attributor, a couple slides were shown that really brought home the point to everyone in the room. One showed a series of bar graphs estimating how much ad revenues splogs were making simply from the feeds of everyone in the room. (Note that this was just for sites taking extensive copies of articles, not simply quoting). The numbers ranged from $13 million (assuming a $.25 effective CPM) to $51 million (assuming a $1.00 eCPM). 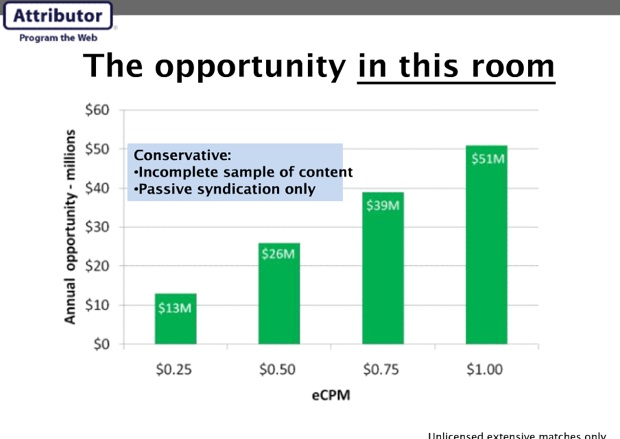 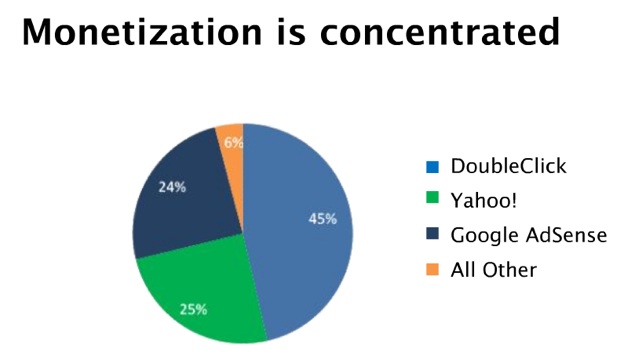 Go after those three ad networks, and the majority of the problem could be solved. There is certainly precedent for this type of approach. Look at YouTube’s Content ID program, which splits revenues between YouTube and the media companies whose videos are being reused online. Except this proposal would take money that would otherwise be distributed to the splog sites themselves, and give a portion of it to the publisher as an automatic syndication fee without the consent of the site owner.

How would the ad networks know that the content in question belongs to the publisher? Attributor would keep track of it all and manage the requests for payment. The consortium is open to any publisher to join, including bloggers. (Attributor runs a free version of its service called FairShare to give publishers a sense of how much of their stuff is being copied without attribution). It is certainly better than sending out thousands of takedown notices, but many issues still need to be worked out.

I’ve seen some of the data for TechCrunch, and there is no doubt that Attributor catches a lot of abuse, not fair use. But some of the sites that fall within Attributors net might still fall within fair use. For instance, I can imagine, a short post two or three paragraphs long being copied in its entirety and being surrounded by commentary. (Although, a minimum 125-word-count limit and exclusion of content clearly in quotes is meant to address such a scenario). Also, I am not sure that demanding payment is the way to go. For the most part, a link and attribution is good enough for us. But if the Fair Syndication consortium gets the ad networks on board and they take a conservative approach to asserting copyright, we might take another look. What do you think, should we join?