For those of us that rely on being but a series of digits away at all times, Google Voice is a godsend. Regardless of which phone I’m closest to, be it the home line, my iPhone, or any of the phones we’ve got out on review, I’m reachable. As helpful as it may be, it’s not perfect – at least, not right out of the box. Google provides a fantastic backbone, but some of the solutions they provide for basic functionality (such as making a call or sending an SMS from your Google Voice number) aren’t reasonable replacements for what we’ve all grown accustomed to. Dialing another number before dialing the one I actually want? Pft. Loading up my browser and waiting for the web interface to load to send a new SMS? No thanks. I’m a whiny iPhone user, and thus expect every product to have a companion App that caters to my every need.

Back when Google Voice was still Grand Central and lacked all of the features that the new name carried in tow (SMS, Voicemail transcription, etc), an application called GrandDialer was released which allowed iPhone users to dial out from their Google Voice number through an interface nearly identical to that of the default Phone application. Unfortunately, enough changed when a user would migrate from GrandCentral to Google Voice that GrandDialer no longer functioned properly. This, of course, resulted in deafening cries for an update from a userbase now once again stuck with the more tedious dialing process. Alas, there would be no such update – the day after Google Voice went live, GrandDialer was pulled from the app store, with its developer announcing that the project had been retired.

It wouldn’t be long before we started hearing about an app in the works, ready to step up and fill the shoes left empty by GrandDialer’s demise. In fact, there are now two applications (that we’re aware of) sitting in Apple’s moderation queue: RiverTurn‘s VoiceCentral, and GV Mobile by Sean Kovacs. Both are ready to hit the App Store at any moment, and both are going for the exact same price. We’ve obtained pre-release copies of both and pitted them head-to-head – so which one should get your hard earned $2.99?

Note: It’s worth reiterating here that both of these applications were tested in their pre-release, freshly submitted forms. The versions we used for testing are very close to what we’ll see when they hit the App Store, though bug fixes and new features could have slipped in by the time they get approved.

Cost:
Whether by pure coincidence or not, both of the applications are set to sell for $2.99 when they make their way to the App Store. 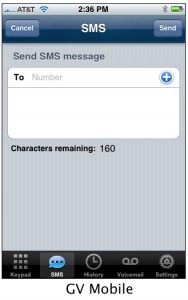 Important to note here, however, is that GrandDialer was free – but lacked much of the functionality found in either of these new applications. This is the App Store, where every third review on any given 99 cent application is complaining that said app isn’t free. GV Mobile will be releasing a gratis feature-for-feature GrandDialer replacement, called GV Mobile Free. It lacks the voicemail, history, and SMS of the premium version.

If any one thing kept people from GrandCentral, it was the absence of SMS – what good is having one unified number if text messages sent to it disappear into the oblivion?

At the time of testing, only GV Mobile had support for text messaging. VoiceCentral’s developers tell me they are hard at work on SMS functionality, expecting to have it implemented within the next few days. Depending on when Apple gets around to giving it the green light, it may well have SMS support at launch. 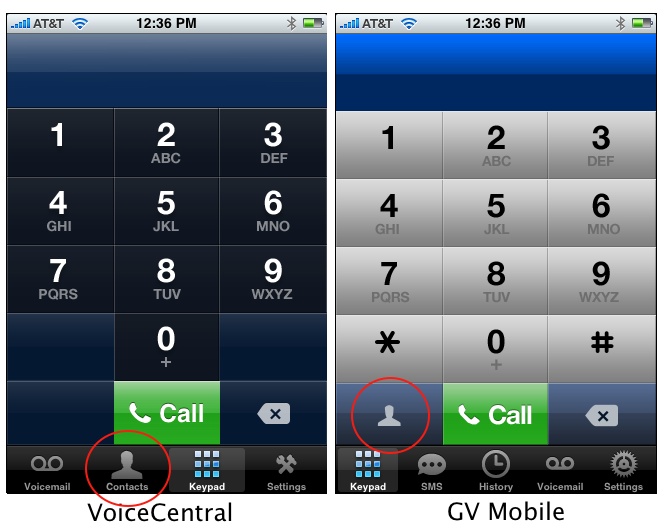 Both applications allow you to dig through your iPhone’s contact list. VoiceCentral places a Contacts key in the static bottom navigation bar, while GV Mobile places a Contacts icon in the dialer and SMS screens. Of the two design methods, we prefer the latter; with the contacts icon off of the bottom bar, more space is available for other icons.

The contact screens of both apps are identical to that of the default Phone app’s screen, as it’s simply being pulled up through the API.

History:
Both applications will show recent incoming/outgoing Google Voice calls. The build of VoiceCentral we used for testing does not currently have it built in, but the developers have shown us that it is ready to go in the next build. 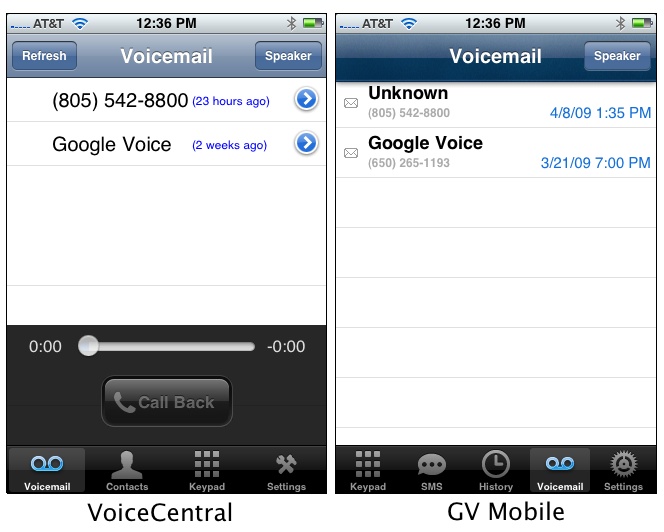 Both GV Mobile and VoiceCentral support playback of voicemail messages left on your Google Voice account, and both feature easy to use Visual Voicemail interfaces.

In our test builds, however, VoiceCentral’s voicemail interface was much better than GV Mobiles. Both support playback (through the ear piece or the speakerphone), and message deletion. However, only VoiceCentral allows you to scrub to any point in a message, manually refresh the voicemail list, or create new contacts from the voicemail caller’s number. Voicemail is one place where VoiceCentral really shines.

In our completely unscientific testing of start-up times (recording each app starting up 3 times, timing how long it took for them to fully load after the icon was tapped, then calculating the average), GV Mobile started up nearly a whole second faster than VoiceCentral, coming in at 3.7 seconds and 4.6 seconds respectively. It may seem trivial – but when you’re constantly clicking into an application to make calls, each second of load time feels like an eternity.

GrandCentral Support:
For whatever reason, a number of people plan on stickin’ with GrandCentral until Google makes the jump to Voice mandatory. Of the two, VoiceCentral is the only one to support this legacy option. GV Mobile only plans on supporting Google Voice.

It’s a bit tough to recommend one application over the other when what we’re seeing isn’t the absolute final release. However – judging solely on what we have in front of us, we’d recommend GV Mobile.

While VoiceCentral’s Voicemail screen is quite superior to GV Mobile, that seems to be its only real advantage. As mentioned above, it also has GrandCentral support going for it – but how many legacy users are only hanging on until applications like these make Google Voice as iPhone-friendly as GrandDialer made GrandCentral? VoiceCentral plans on implementing a number of features that would balance things out significantly – but GV Mobile has a drastic lead. We prefer a number of GV Mobile’s user experience choices, and the overall design of the application – so in the end, that’s where we’d spend our 3 bucks.

Whichever application you go for, look for it to hit the App Store within the next few days.