GrandCentral, a phone management service that first launched in 2006 and was acquired by Google for $50+ million in 2007, hasn’t been in the news much lately. Other than a few good natured jabs at their marketing gimmicks and coverage of outages, that is. Get ready for that to change as the service prepares for a public launch under a new product name: Google Voice.

The 21 month delay between acquisition and relaunch was, unfortunately, expected. Like most Google acquisitions, the service has been rebuilt from the ground up, a lengthy process that has in the past taken an average of 16 months or so.

Now, though, Google is ready to fully launch Grand Central/Google Voice. Key new features have been added that make the service absolutely compelling (each is described below). The basic idea around GrandCentral is “one phone number for all your phones, for life.” Grand Central gives you one phone number that can access all your numbers, whether they be cell, home, mobile, and work numbers; the GrandCentral numbers stay the same, as many of these number change over the course of a user’s lifetime. Here’s our quick and dirty guide to using the old GrandCentral.

Most people have never used the service, because Google froze new accounts after the acquisition. The freeze isn’t being lifted yet (and we’ve heard there are tens of thousands of people on the wait list). But starting Thursday existing accounts are being given the option of switching to the new service and gett access to the new features. Over the next several weeks Google will begin to let new people in. Some people, impatient to try out the new service, have been paying as much as $650 on Ebay for an account.

The service was free and is still going to be free. Users can purchase credit (much like Skype) to make international calls at rates far below what they normally pay. GrandCentral will also remain solely a U.S. service.

Google’s added new features and plugged some big holes that limited the original service. Some of the more useful and innovating new features (and see screenshots at end):

Text Messaging: Google wants people to use their Google Voice phone number exclusively (and in fact it’s the only way to use it properly). A problem with the original service – it didn’t allow text messaging, so you had to tell people your mobile number as well if you wanted to send and receive text messages with them. Now, Google Voice will accept text messages and forward them on to your mobile phone. You can respond to those messages as well. Google is using the existing Gateway technology (which is used by Google Chat) to power this feature.

Voicemail Transcription: Google also added a nifty transcription feature (which is using the same subscription service as Google 411) for voicemails. All voicemails are transcribed easily saved into the system and searchable. Users can add notes or tags to voicemails and each transcription details how confident Google is about the success of voice transcription; Google Voice highlights word in lighter color that they are not confident were subscribed properly. And transcription takes about 30 seconds to be seen in the system from the end of a voicemail. All in all, Google may have unkilled the dreaded voicemail.

Friend Settings: Google has added new settings that allow users to route calls from specific people straight to voicemail, or your mobile phone, etc, instead of having to state their name and then be forwarded accordingly.

New User Interface: The primary user interface for Google Voice is through your phone via an audio menu. But users can also log in to the website to administer the account and view activity. This interface has undergone a makeover – It now looks very much like a comprehensive Gmail inbox with tabs for Voicemail, SMS, Recorded calls, Placed calls, Received calls and Missed calls. And the Google Voice is easily integrated into the list of links to Google apps at the top left of each application. All SMS and transcribed voicemails are searchable and taggable, which is very useful and will change the way people interact with these messages. Google also says that full integration with Gmail is coming, but won’t say when. Personally, having all my email, SMS and transcribed voicemails in a single inbox could be life-changing. You can also respond to text messages from the interface and initiate phone calls, which then calls your designated phone and then the recipient.

Google is finally bringing us the voice service that was promised back in 2006. With GrandCentral, you no longer have to wrestle with 3 or more phone numbers and multiple email and texting devices. You give out one phone number, administer it with a website or voice menu, and forward calls to various devices depending on who’s calling and when.

Google has also fixed most of the limitations with the original service. Outages are a thing of the past, they say, and there won’t be any further reassigning of phone numbers. The new SMS feature means you don’t have to give out your mobile phone separately. And the voicemail transcription and search feature is a great addition.

Still, users have to get over a big initial hurdle – getting all their friends to start using a new phone number instead of the old ones. Business cards are to be thrown out, new ones printed. Contact cards updated. Etc. There’s nothing Google can do to fix this problem.

But they can prove that the service is reliable. No dropped calls. No outages. Proper support even though its a free product. If they do that they can conceivably control the phone numbers for millions of people…and eventually find a way to monetize all that power.

We have 100 Google Voice accounts to give out to readers, but you must have a gmail account. If you’d like one, please send an email from your gmail account to techcrunch@gmail.com (note that this isn’t an account we check regularly) with the exact subject “Google Voice Account” – the first 100 will get an account invitation from Google. Update: We’ve now received several thousand email requests, so the 100 are gone. 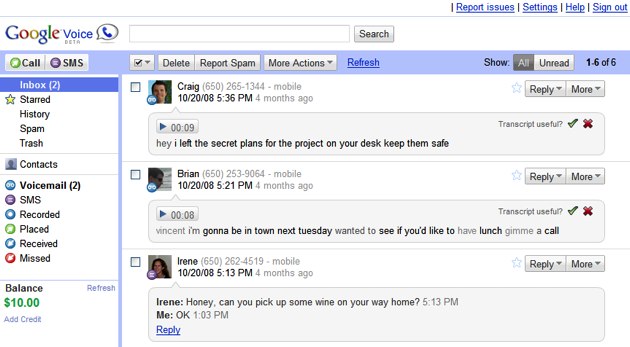 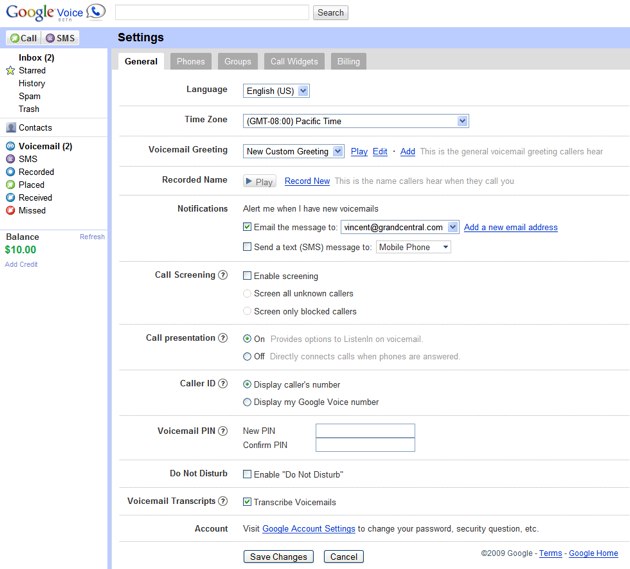