This evil-looking boombox is definitely what Vader would have had in his room as an surly teenager — which is to say, during Attack of the Clones. The best part about this AT-AT stereo is that it’s pretty much cassette-only. There aren’t any good shots of the insides so we can’t tell if it even works, although my heart tells me it does. 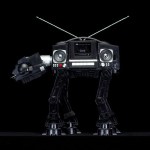