The video above of a man throwing his shoes at President George W. Bush during a press conference in Baghdad on Saturday is sure to live on in infamy for many reasons: the sheer brazenness of the act, the incredible lack of adequate security surrounding the President of the United States (a journalist had to take the shoe tosser down), and the sad commentary on the President’s standing in the world during his waning days in office. It is already infamous on the Web, having gone viral through YouTube.

The YouTube video has been seen more than 5.5 million times across at least 640 different clips where it has been embedded, according to Visible Measures. The chart at left shows teh number of views between 7 AM and 5 PM on Monday.

In less than 12 hours the video went from 2 million to 5.5 million views, and may be on track to beat the Obama victory speech video in terms of viral reach in a 48-hour period. Is that how Bush will be remembered? 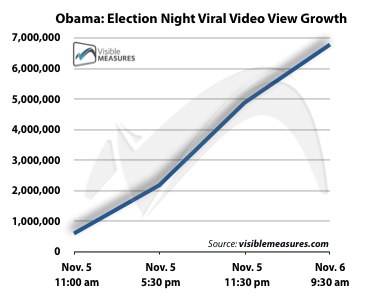