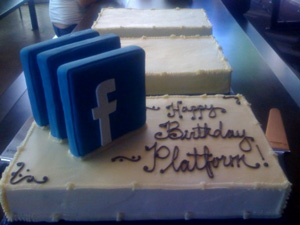 Today marks the one-year anniversary of the release of Facebook Platform. We figured it would be a fitting time to take a look at what the platform promised, what it’s delivered, and where it’s going in the future. The summary: Facebook Platform has been a victim of its own success, offering an unparalleled distribution platform that has appealed to both tens of thousands of legitimate developers as well as shoddy shotgun entrepreneurs looking to make a quick buck. Facebook has had its share of missteps, but no matter how much they improve the platform, it is only as strong as its apps (which at this point simply aren’t very good).

Facebook Platform launched on May 24, 2007 to widespread acclaim. It was heralded as the “Anti-MySpace”, which had until then been notoriously closed and unhelpful to many application developers. Suddenly we had a platform that offered unprecedented access to a social network’s API, enough so that 3rd party developers could potentially create apps that would rival Facebook’s home-brewed offerings.

Only four days after the platform’s launch, iLike (then the leading 3rd party app) had accumulated 400,000 users – nearly 5% of all Facebook users had it installed. Initial results were promising enough that a number of venture capital funds were established solely for Facebook apps.

But after a couple of months, the novelty began to wear off. The promised “revolutionary” applications were few and far between, and most of the available apps were really, really bad. Facebook users were also notoriously fickle, installing and discarding apps with abandon. To combat this, some developers chose to create an endless stream of mostly useless (but viral) applications that could be pumped out as quickly as users could get sick of them. The result? Spam. Lots of spam.

Facebook Platform had devolved into a cat-and-mouse game between developers and Facebook, as developers tried to maximize the number of users they could expose themselves to. Many of the most popular app makers, including RockYou and Slide, had resorted to so-called Black Hat tactics, exploiting loopholes to increase their exposure. Many users were constantly inundated with spammy application invites, some of which falsely promised personalized message left by friends.

By August, three months after the launch of the platform, Facebook started to respond to the abuses by changing the rules. Metrics listing the most popular apps began to measure actual use rather than raw install numbers (many popular applications were simply installed and forgotten about). Stricter limits were placed on the number of invites an application could send out. But Facebook didn’t take any steps to punish applications that had gained users through illegitimate means, effectively telling developers they were free to exploit the system if they could figure out how.

On the development side, Facebook Platform also presented a number of problems. Apps that went viral on Facebook often saw their usage rates rise exponentially in a very short amount of time, leading to slow responses and errors. Developers also had to deal with a constant competitive threat from the network itself – at any time Facebook could implement a new feature that could wipe them out of existence.

In September at TechCrunch40, CEO Mark Zuckerberg announced fbFund, a joint funding venture from Accel and Founders Fund that would earmark $10 Million for Facebook apps. The project got off to a rough start – Facebook rejected all applicants after deciding to change its application process (it had previously asked for a simple email request).

One of Facebook Platform’s problems had more to do with stupid users than the platform itself. Many people had friends that, for whatever reason, liked to litter their profiles with obnoxious and annoying apps that destroyed Facebook’s classic clean feel. Finally, in January 2008 Facebook relented and allowed users to hide apps from their friends’ profiles. This was an oft-requested feature, and one that should have been available since the platform’s launch.

Facebook continued to further tweak app restrictions. In February the site implemented blocking, which allowed users to prevent a specific app from ever contacting them. It also added a “clear all” feature, that allowed users to clear their Notifications box of all invites.

Perhaps Facebook’s most unsettling move came during March Madness, when it introduced the “official” CBS Sportsline NCAA Basketball app. The app was given an unprecedented amount of publicity across the network, and its invite restrictions were far more lenient than normal. Other developers were understandably outraged, as Facebook demonstrated that the rules only applied to the little guys – pay enough, and you’ll get free rein. Facebook has shown little remorse for the debacle, with its Senior Platform Manager stating “I can’t say it won’t happen again.”

Outlook: Who knows. Facebook is planning to introduce a micro-payment system in the near future, which may finally give way to useful, monetizable apps that don’t rely on spamming invites. But the damage has been done, and some users may be too jaded to care about anything the platform has to offer in the future. What’s worse, we probably wont see an end to the junky apps any time soon – a number of venture firms have poured millions of dollars into companies that thrive on cranking these things out, and they’re going to want to see results.

But the important thing to remember is that Facebook Platform is, in the end, all about Facebook. It keeps your data locked up tight under the guise of privacy concerns. What users really want (or what they should want) is to control their own data, and make it known that they, not Facebook, own it. Facebook has taken a few first steps in letting some of that data out. Perhaps if users start to demand more, the trend will continue.