Facebook is holding a massive press/developer event today in San Francisco to officially launch Facebook Platform. 750 or so people are here.

Facebook is giving an unprecedented amount of access to developers. The API would allow, for example, a third party to recreate Facebook Photos, the most used photo application on the web. Users could then remove the default Facebook Photos and install the third party version instead.

Applications can serve their own ads and/or conduct transactions with users. Ads can basically be shown anywhere that Microsoft ads are not currently shown.

There will be a special applications area on Facebook where users can browse and add third party apps. But there is also a crucial viral component – when a friend adds an application, it is noted in their news stream on their profile. Clicking on the item brings you to the app, where you can add and/or interact with it yourself.

Users will also be adding applications to their site, where others can click and add it to their own profile. The apps will essentially look like any other Facebook application.

The payoff is two way. Not only do developers get deep access to Facebook’s twenty million users, Facebook also becomes a rich platform for third party applications.

Facebook’s strategy is almost the polar opposite from MySpace. While MySpace frets over third party widgets, alternatively shutting them down or acquiring them, Facebook is now opening up its core functions to all outside developers. 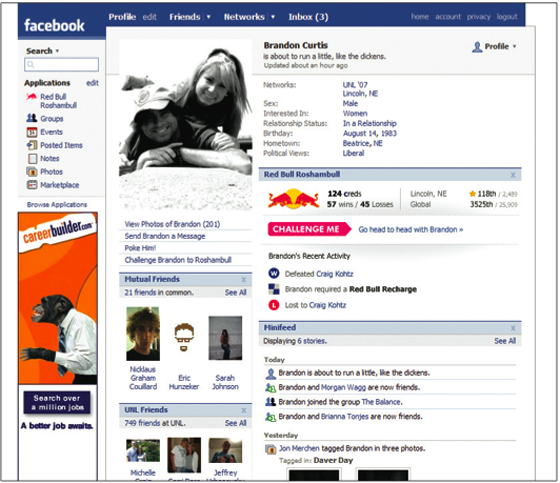 The fastest growing demographic is the 25 and up age group.

50% of registered users come back to the site every day.

Talking about how Facebook opened up registrations last year, and launched News Feed.

Facebook is generating more than 40 billion page views per month. That’s 50 pages per user every day.

6th most trafficked site in the U.S.

More page views than eBay. Says they are targeting Google next.

Applications: photos, groups, events. Plug into profiles. Use all the real connections people have

Their photos app is by far the number one photo site on the internet.

Says these apps work so well because of the “social graph” – a network of connections through which people share information with friends.

The news feed feature in particular allows information to be pushed out through the social network to more people, faster than any time in history.

Deep intergation, significant freedom to monetize via ads and transactions.

Dan Lewin, Microsoft VP, on stage talking about integration of Popfly into Facebook.