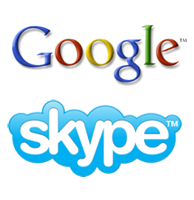 Something big is brewing between Google and Ebay’s Skype, we’ve heard from multiple sources. Actually, for weeks now there have been low level rumors of the two companies talking, but nailing down any details was difficult. New information, however, suggests that they are in current talks and that a partnership or outright acquisition may be announced in the near future.

Skype, acquired in late 2005 for $3.1 billion, has been a financial albatross around Ebay’s neck. eBay removed Skype co-founder and CEO Niklas Zennstrom in October 2007, reportedly due to frustration at the financial performance of Skype. Ebay also negotiated down the huge earnout due to Skype stockholders and took a $936 million one-time loss around the transaction.

It’s clear that eBay wants to either unload Skype, or significantly drive performance.

Google, by contrast, is just beginning to think about how to dominate the voice space. They have a VOIP service through GTalk, a free 411 service and GrandCentral, a telephone management service they acquired last year for $50 million.

All of these products reside under VP Product Management Salar Kamangar and his new right hand guy, Bradley Horowitz. Other key players in the group are Wesley Chen, the product manager who championed the GrandCentral acquisition, and GrandCentral founders Craig Walker and Vincent Paquet.

That core team should be at the CTIA Wireless Conference in Las Vegas, but we’ve heard that they either aren’t there or at the very least aren’t showing up for scheduled meetings (if anyone at the event sees them, let me know). That doesn’t mean the team is busy working on a partnership or acquisition of Skype instead of attending the conference. But given that we’ve heard from sources close to the deal that something is happening between the companies, it’s not a stretch, either.

What does Skype bring to the table? Scalable technology and a proven platform in the VOIP, VOIP2POTS and P2P Video, to start – 100 billion VOIP minutes have been logged on Skype to date. At any given time there are 10 million simultaneous users on Skype. Skype is the glue that can pull all the nascent Google products together.