The New York Times has decided to let users post stories directly from their site to Digg, Facebook, and Newsvine. As of Monday, the paper will embed links to all three sites to most of their online stories.

The new link will not be embedded into stories used on the paper’s premium content site, TimesSelect, staff blogs or wire stories. 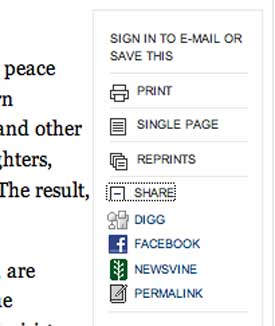 This seems like a begrudging move for The Times, a paper with an elitist reputation and a crossword puzzle that you need a PhD to solve. A social networking site like Facebook doesn’t seem the type of company that The Times would consort with but getting into social news sharing is just good business these days.

Christine Topalian, manager of strategic planning and business development at NYTimes.com, told The Seattle Post-Intelligencer that the paper had been “looking for ways to tap a tech-savvy audience that is accustomed to commenting on and sharing news stories.” Apparently, they started by contacting Digg and Newsvine directly, while Facebook was included because they had contacted The Times earlier this year with a news-feed service pitch.

Although you could always manually add The Times stories to news sharing sites such as Digg and Newsvine before, the capability to do it directly from the story means that The Times is paying attention to where its stories are shared, who reads them, and, more importantly, what they are saying about them. Currently, The Times offers limited ability to comment on its stories. The world of readers’ comments can be brutal (believe me, I know this first hand), and by dealing directly with the sites that facilitate this, The Times exposes itself to far more reader interaction than they have ever had before.