For a lot of companies, the whole point of CES is to get attention — and in this sea of noise, that’s tougher than it might sound. Someone else will always have a bigger screen, or a prettier booth, or a better celebrity guest.

So Google tried something a bit… different this year. They built a friggin’ theme park ride.

They built a two-story building right in the middle of the Las Vegas Convention Center parking lot, and the ride takes up the entire upper floor. From the pre-ride line experience (complete with animatronic Grandma talking with guests in line), to a holding room that uses clever projections to tell a story (Don’t forget the cake for Grandma’s birthday party! Assistant can help!), to the ride itself… it’s just ridiculous. The work and engineering that went into this — and the quality of what they built for something that’ll only be here for a few days — is seriously absurd. 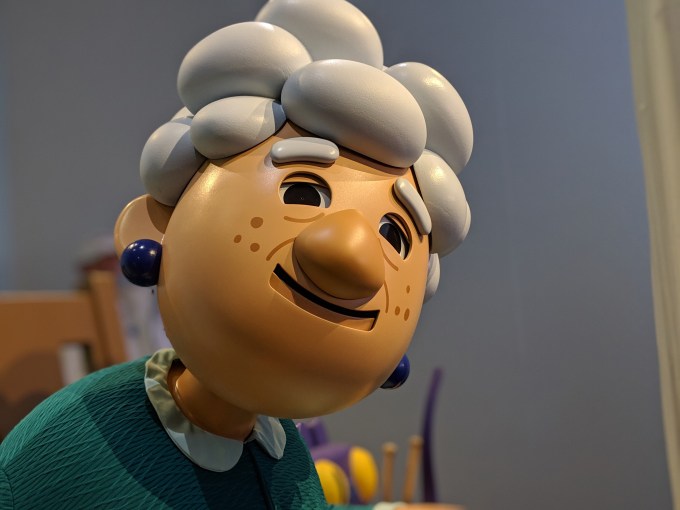 I’ve been to Disneyland more times than I should probably admit. Strip away the Google branding and throw in some hidden Mickeys and this ride would’ve felt right at home there. There are definitely some bits that felt like they were inspired by Disney rides (Grandma in line reminded me of the mid-line Mr. Potato Head on Midway Mania, and they pulled off a star effect in a way that reminded me a bit of Peter Pan’s Flight), but it had plenty of clever twists and tricks of Google’s creation, too.

I can’t begin to calculate how much they spent to make this (I asked Google a few times, but they never answered). But if the goal was to go way, way, way over the top, to the point where the “top” is just some vague speck on the ground, they succeeded. Part of me wants to be cynical about the excessive spending here, but… well, that’s just sort of what CES is.