In just three years, Traefik, the Cloud Native Edge Router, has become a key player in microservices infrastructures. With more than 18,000 stars on Github and 300,000,000 downloads on DockerHub, Traefik is widely used by major companies in their production environments.

Today, we are proud to announce that TraefikEE, our new commercial product, has reached public beta. TraefikEE allows you to deploy distributed Traefik instances across your infrastructure, providing a scalable and reliable edge routing platform. Split into a control plane and a data plane, Traefik cluster nodes are easily deployed and operated using the TraefikEE CLI. Implementing the Raft consensus, TraefikEE can safely store and replicate configurations and TLS certificates across the nodes.

Let’s take a look at how TraefikEE works. 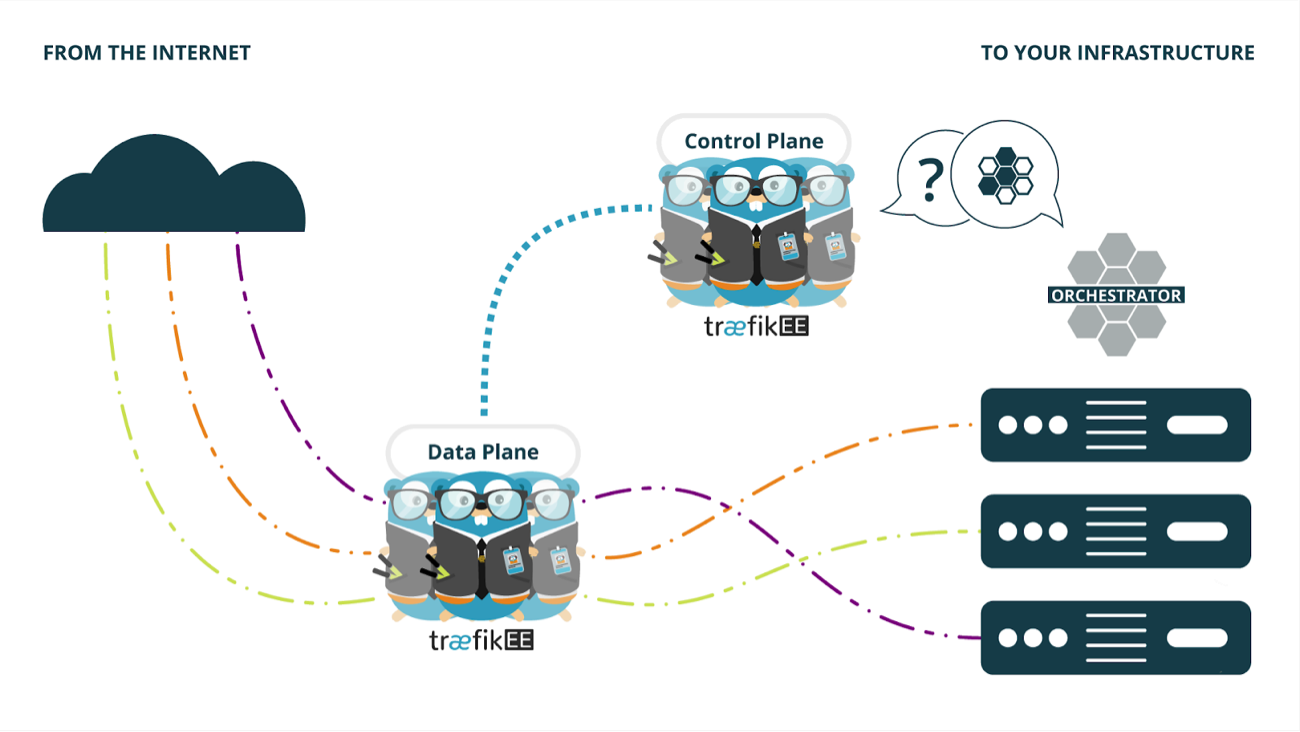 TraefikEE is built on top of Traefik and adds clustering features to satisfy the needs of Enterprise customers. All Traefik concepts apply to TraefikEE, so if you’re already a Traefik user, you’re in familiar territory.

It runs on the edge of your platform to route the traffic to your applications, and is composed of two elements:

This distributed architecture is the cornerstone of TraefikEE’s strengths: natively highly available, scalable and secure.

The control plane is a key component of TraefikEE. It is responsible for storing all cluster data, including events, TLS certificates, and Traefik configuration. It is also in charge of connecting to the orchestrator to generate the data plane routing configuration.

Since it is such a critical part of your system, TraefikEE is designed from the ground up to be fault tolerant: the control plane runs natively in cluster mode without any extra configuration or external Key Value Store. It ensures your data is always available and safe by using an internal distributed store, implemented with raft.

The data plane is in charge of forwarding the incoming requests to the applications. It has been designed to scale horizontally at a glance in order to face irregular network loads.

TraefikEE handles high loads in a blink: just add more nodes to the data plane to handle the additional requests. When the peak is gone, shrink the number of nodes to save resources. Of course, this process can be done automatically using auto-scaling tools.

By splitting responsibilities between two components, TraefikEE follows the principle of “Separation of Concerns.”

To ensure that sensitive information only runs on a closed and safe environment, the control plane is not exposed to the outside. As a result, any malicious action from external traffic will stay stuck in the data plane and your platform will stay safe.

Moreover, TraefikEE only relies on encrypted communications between nodes, to add an extra layer of security.

Installing and managing a raft based application is usually a painful experience. Since Traefik was made popular thanks to its usability and refreshing user experience, we have extended those benefits to TraefikEE.

For this reason, TraefikEE comes with an additional CLI that manages to deploy and operate a cluster with several nodes in only one command line. Currently, Kubernetes and Docker Swarm Mode are supported. More platforms will be added soon. Teams will love to use this time-saving tool, traefikeectl (pronounced “traefikee-cuddle”).

TraefikEE comes with a dashboard to visualize your cluster nodes configuration and status, in addition to aggregated data plane metrics.

Commercial support is bundled with TraefikEE. The Traefik engineering team immediately investigates and resolves any critical issues which may arise.

TraefikEE is available in public beta starting today. The registration process is as simple and automated as possible, so don’t fear endless registration forms nor crowded waiting queues before trying it out. Visit our website at https://containo.us/traefikee and get your license key in less than a minute!

TraefikEE is built on top of Traefik, that means that Traefik continues to evolve and will stay open source. Nothing changes! We are firm believers in open source, and Traefik will continue to be our main priority and a community-driven project. We are working on significant changes to Traefik, and recently have shared details on what we have been doing so far. Please stay tuned for full disclosure.

Containous is the company that supports the development of Traefik. We provide professional services to ensure businesses get the most out of the solution.

With this new product, Containous continues to innovate and define new ways to access microservice platforms, pushing the limits of automation and scalability.