When it comes to protecting and unlocking digital devices, security and convenience are often mutually exclusive—you can have one, but only if you are willing to sacrifice the other. Fortunately, engineers at Huawei ignored this conventional wisdom when they designed the Mate 20 Pro. Supporting 3D Face Unlock and armed a highly sensitive in-screen fingerprint sensor, the Mate 20 Pro is a breeze to unlock, putting both security and convenience in the palm of your hand.

By supporting 3D Face Unlock, Mate 20 Pro users are quickly and securely authenticated within 0.6s, with a false-acceptance rate of less than 1/1,000,000. Using the 3D Depth Sensing Camera located at the front of the device, 3D Face Unlock accurately reads the facial features of a subject, down to the smallest details. Besides user authentication, the Mate 20 Pro’s suite of sensors also enables portrait beautification effects to be realized in a more natural and effective way.

While the depth-sensing camera on the Mate 20 Pro is one of the secrets to the strong security and ease of use of 3D Face Unlock, AI also plays a major role. More than just a means of taking and then storing a single snapshot of your face, 3D Face Unlock actually learns about your face over time, understanding, for example, that sometimes you like to wear glasses while other times your prefer contacts. Similarly, if you thought you could rock a beard but your family begs to differ, 3D Face Unlock will not be confused by either the growth of facial hair or its sudden removal. It will even learn to identify your face as it ages, from youth through adulthood. As far as 3D Face Unlock is concerned, you will always be you. 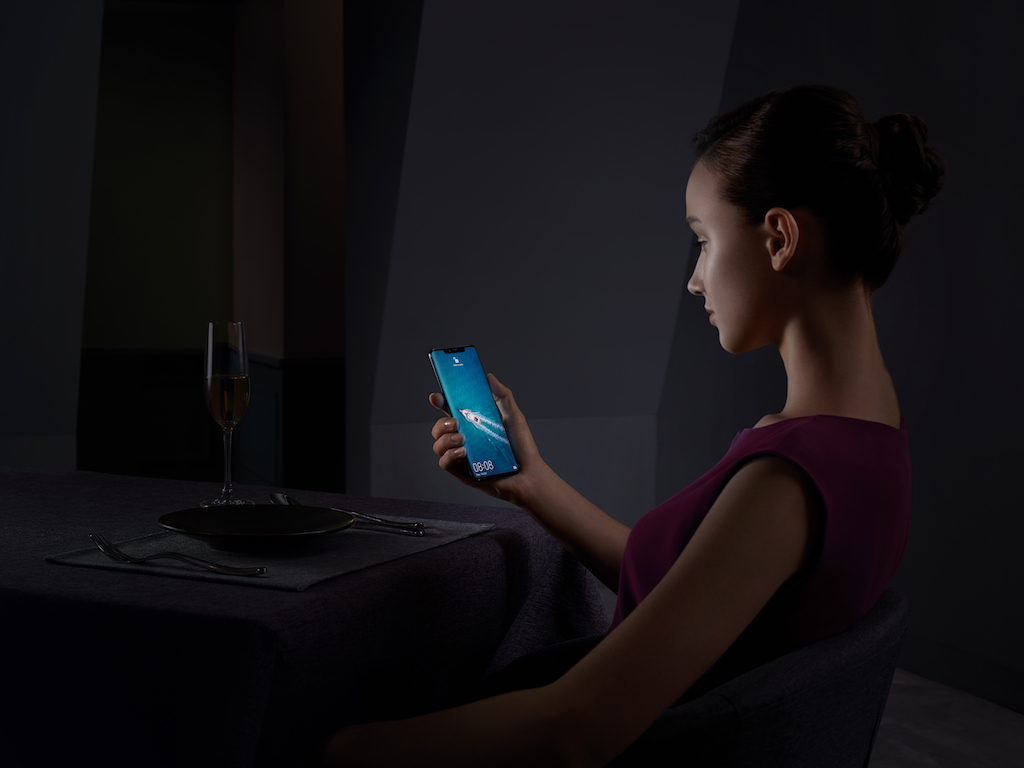 While 3D Face Unlock is primarily designed to give you quick and secure access to your Mate 20 Pro, it can also help you control access to some of its apps via a feature called App Lock. For example, you can give your child your Mate 20 Pro to play a few games, secure in the knowledge that their face won’t be enough to open your email and send all of your connections invitations for a play date on Saturday. In this way, 3D Face Unlock protects your privacy—and sanity!—even when the Mate 20 Pro itself is unlocked.

Naturally, the Mate 20 Pro’s fingerprint sensor is seamlessly integrated into the device’s screen, but this sensor does more, actually sensing the presence of your finger as it hovers over the sensor’s location. When that happens, the sensor sends a signal to the spot on the screen where you need to press, instantly causing that spot to light up. A gentle tap of the finger on the lit spot triggers the almost-instant authentication process, followed just as quickly by the disappearance of this unobtrusive visual prompt. Thanks to this dynamic pressure-sensing capability, accuracy and speed have been improved significantly over previous Huawei smartphones. Before you even know it’s happened, your Mate 20 Pro is unlocked.

In addition to the peace of mind that comes with biometric tools such as 3D Face Unlock and the Mate 20 Pro’s in-screen fingerprint sensor, the smartphone features a password vault, which is a secure zone on the device—never in the cloud—designed solely for storing passwords. In other words, the Mate 20 Pro remembers your passwords for you, making secure login automatic. The Mate 20 Pro also makes it easy for you to backup your data, whether you choose to upload it to the Huawei Cloud, save it onto local storage via a tethered or wireless connection, or copy it onto a 64GB, 128GB, or 256GB memory card via the device’s NanoSD expansion slot. All of which means that if you lose your phone, no one will be able to get into it—that’s the security part—without sacrificing convenient access to all of your data.