The Covid-19 pandemic shifted many paradigms and hastened what had been gradual changes in a wide array of medical fields, from ushering telehealth into the mainstream to turning rapid vaccine development from a dream into a reality. And while dentistry underwent relatively little change during the tumultuous year, an ambitious orthodontics startup called SoftSmile is aiming to fully remake the orthodontics space over the next few years.

Before the early 2000s, undergoing orthodontic teeth-straightening was a painful privilege. Parents saved and scraped together thousands and thousands of dollars to pay a dentist to graft metal brackets and wires into their kids’ mouths, an unpleasant process that required regular and equally unpleasant upkeep while doing little to enhance their social standing in adolescence. The turn-of-the-century advent of Invisalign and its pioneering of clear plastic teeth aligners were game-changers for the physical pain and embarrassment brought on by metal braces, but did little to solve the issues of affordability and accessibility.

Though a number of competitors have cropped up over the past decade, Invisalign still dominates the clear aligner market. The continued control of market share is at least in part due to the lack of significant innovation from any of its competitors, a status quo that SoftSmile is ready to disrupt by utilizing two of the fastest-growing and revolutionary technologies in use today: artificial intelligence and 3D printing.

Disrupting a market that has hardly shifted 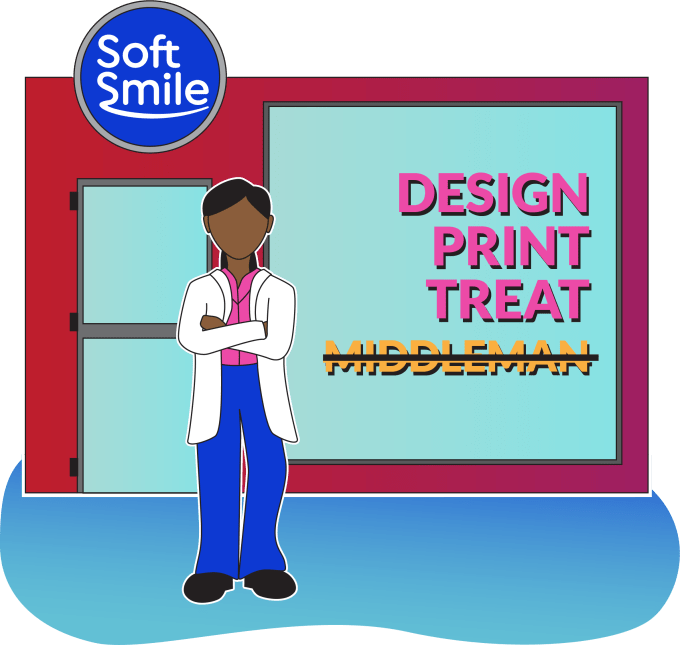 The process pioneered by Invisalign is a multi-step process that requires multiple professionals and often multiple weeks of development.

Typically, an orthodontist meets with a patient and takes a model of their mouth, then creates a treatment plan using inexact technology. The model is then sent to a far-away production hub, which produces multiple sets of aligners out of heavy plastic; each set is meant to both reflect the projected alignment shift and guide the teeth to the next step in the straightening process.

Each new set of aligners is likelier than the last to not be an accurate reflection of how the teeth have shifted and the path they must take to reach the goal. This lack of reliability is compounded by the high overall cost of the aligners and the extended timeline required for any replacements.

SoftSmile’s revolutionary software and its compatibility with consumer hardware addresses each problem presented by Invisalign and the slew of competitors. SoftSmile cuts down the cost, removes the middlemen, provides a more effective treatment, and makes orthodontics far more accessible for both patients and doctors alike.

Vision, the company’s AI-powered treatment plan program, took years of careful software development and consultation with doctors. The result is an end-to-end solution that analyzes a patient’s mouth and teeth from many different angles, turning parameters like the length of roots and the width of teeth into key data points.

The artificial intelligence that makes up the core of the software was refined with input from practicing dentists and other prominent dental professionals, leading to a system with an incredibly nuanced understanding of biomechanics. Vision’s use of point clouds makes the models rendered by AI both more accurate and completed in a markedly faster process than those used by other aligner designers. That’s not just bluster or marketing; SoftSmile has over 50 patents for new innovations connected to Vision already.

The treatment plans can be adjusted if needed by the dentist using the software, ensuring that every patient gets the optimized treatment plan approved by a doctor. The consulting doctors ensured that Vision’s interface wound up very user-friendly.

“We know that not many doctors know how to make treatment plans and they have never worked with digital solutions,” says Asabaev. “That’s why it was important for us to make this program very intuitive and very easy, so that even inexperienced dentists could start making aligners for their customers for their patients.”

The software itself can be sent updates, which will play a key role in SoftSmile’s mission to make orthodontics accessible everywhere, including in more remote locations. Machine learning helps refine the algorithm, which ultimately benefits future patients.

“The more data we receive and the more feedback from users the more accurate it is, so it’s continuously learning,” says Damian Gerikhanov, SoftSmile’s Chief Engineer.

Vision’s machine learning also automates some of the tedious steps of creating treatment plans, which helps dentists get to the key next step even faster.

SoftSmile gives dentists the power to create the aligners themselves 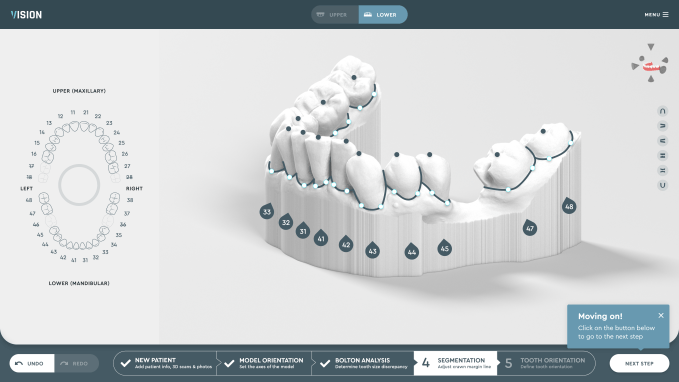 Here’s where the cost-savings really kick in. Right now, Invisalign and its competitors require dentists to send their patients’ data in order to create treatment plans for manufacturing, then actually fabricate the aligners and send them back. Every party involved in the process needs to turn a profit, which is one reason why the cost for orthodontic aligners still hovers around $5000 per patient. (The problem is not a third party manufacturer but the fact that doctors can’t choose where to print.)

Instead of relying on an extended and expensive supply chain, SoftSmile gives dentists the power to create the aligners themselves, in their offices. Vision works with many consumer-grade and dental 3D printers, allowing any dentist with a compatible printer to get the job done within hours.

“The business model is that we give the software to other dentists and manufacturers, and when they combine our software with their 3D printers for their manufacturing, you basically create hundreds of competitors to Invisalign,” Asabaev explains.

These printers have become increasingly popular amongst dentists already, given their ability to create molds and models and other key tools. In effect, SoftSmile utilizes technology that dentists already have to dramatically cut down on the cost of aligners and democratize the process and availability of aligners.

If a dentist doesn’t have a 3D printer and isn’t in a position to obtain one, SoftSmile already partnered with a large number of manufacturers that can 3D print the aligners on their behalf.