Digital transformation has become even more critical over the past few years. However, most companies are still struggling to succeed. To be fair, it’s not that these transformations are completely failing. They’re just not meeting all the expectations of business leadership. In particular, these initiatives are not being delivered fast enough on top of what’s perceived as a prerequisite for success: a cloud-native digital platform for hosting and managing APIs, services, and integrations.

You shouldn’t just blame IT. Cloud-native development is difficult. The first cloud-native digital platforms and some of the technologies they use were first created by digital natives that include the FAANG companies and a few tech-savvy cloud-first startups. These companies had both the technical and financial resources to assemble these new technologies, and the business model to justify the investment. Most of the global 2000 companies, and even most cloud-first startups, either do not have access to the same level of resources, or they just don’t want to take on the burden of this new technology. For most companies, the unique digital experiences they build, and how fast they build them, are what differentiates them from their competitors. However, the underlying infrastructure required to move fast does not differentiate.

Most innovation today comes from software-as-a-service (SaaS) products, and the majority of investment in software today goes into SaaS first. But to date, there has been a gap between the capabilities of the big companies to rapidly create and deploy services, and what other companies can achieve.

Fortunately, like the quote in Jurassic Park, “software will find a way.” Technology has always evolved, consolidated, and gotten simpler. Today, evolution and simplification usually means “SaaS will find a way”. In the case of digital platforms, you would expect three changes to happen.

One of the first such digital platforms is WSO2’s Choreo. WSO2 has been in the open-source API management and integration space for almost 17 years. We’ve spent the past 6 years developing an open-source programming language named Ballerina that streamlines the writing of new services and APIs, which Choreo leverages.

Choreo is a digital platform as a service that lets companies develop APIs, services, and integrations and manage them fast. It enables developers and operations to go from ideation to production in hours or days versus weeks or months by giving them one seamless, combined experience that abstracts away the complexity of cloud-native computing. Choreo takes many of the best practices used in more advanced open-source deployments to heart. It not only productizes many of these best practices across development, operations, and governance but also streamlines the processes used to implement them.

Let’s dive right into what Choreo can do and how it lets you quickly create services, integrations, and APIs.

With Choreo, WSO2 chose to simplify the pro-code approach for developers rather than build a low-code approach for non-developers. Choreo focuses on the developer first because a unique, differentiated experience has to be built, not bought, and the APIs behind building those experiences require coding.

Choreo makes the development experience simple and fast by allowing developers to graphically create new services, integrations, and APIs, or reuse existing ones from a marketplace, all without having to code. Every graphical action creates code that you can see side-by-side. The diagram you build is code, and vice versa. It’s like using templates. What you graphically build generates the right code framework. What’s different is that when you code, the sequence diagram and other flows automatically change. This approach ends up making code-based development much faster, and less error-prone. 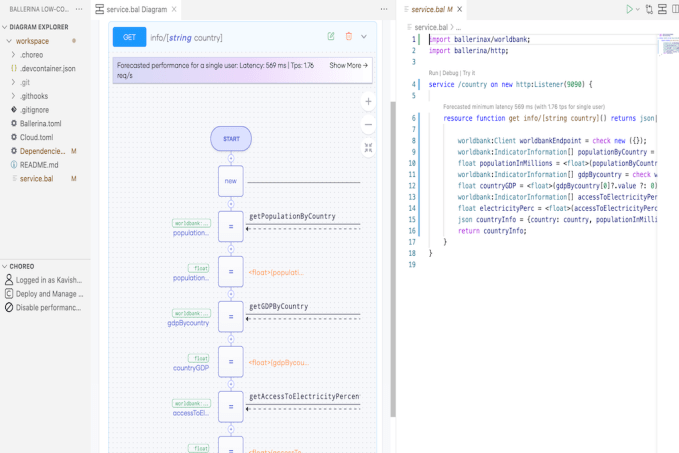 A major element of API development is re-use. A developer should know what an API is, but they shouldn’t have to code all the logic around the API (that’s what Choreo does). Choreo makes API reuse simple and graphical. It includes a developer marketplace for APIs, integrations, services, and connectors that makes it easy to discover, reuse, publish, and share. It includes over 400 pre-built connectors. Developers can use any connector from the marketplace and Choreo generates all the code around it so that a developer can focus on the core business logic. 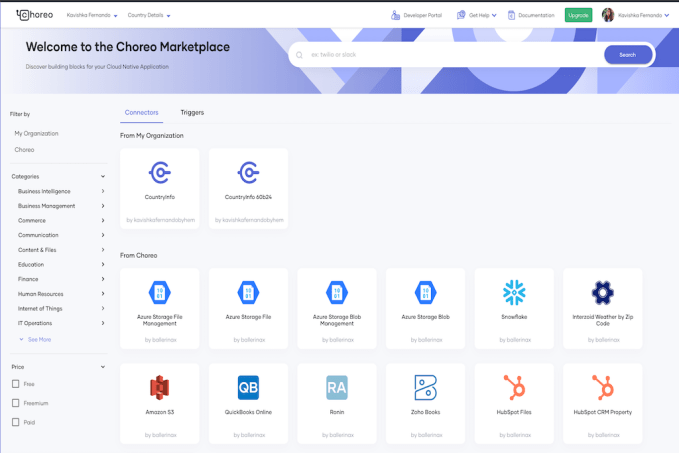 Coding is much faster and simpler using Choreo, for several reasons. Yes, you do need to be an API developer, but you don’t need to manage everything else around the API, which has ended up being the majority of the work in development, deployment and operations. For example,

This is pure, portable, versioned code that runs on open source technologies. You can also use your own Git repository. At any time, you can take this code from the Git repository and deploy it into your own Kubernetes cluster.

While improved developer productivity on its own is impressive, there are many other features of Choreo that help deliver the biggest benefit, which is the ability to deliver new APIs and changes in hours or days, not weeks or months.

With Choreo, developers no longer have to worry about testing and multi-stage deployment frameworks, or building a complete CI/CD pipeline. Choreo provides an automated CI/CD pipeline that includes standard multi-stage environments like development, testing, staging, and production. Developers can walk through each stage with just a few clicks. Choreo parametrizes fields that developers can change by stage. It also generates all the files needed to deploy the code into a cloud-native multi-stage environment that runs on Docker and Kubernetes. 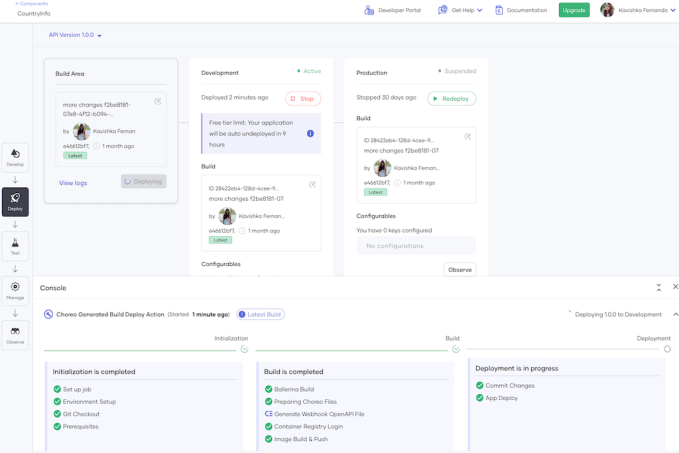 APIs must be secure. However, security and governance are often only reviewed and implemented after API development. WSO2 built Choreo to protect APIs, manage tokens, and define security policies by default, from design onwards throughout each stage to production. Choreo has built-in security—from integrated IAM (identity and access management) to policy management and threat protection—all streamlined together. Developers no longer have to worry about token and key management because Choreo makes it simple to generate a key as needed. Choreo also adds checks for security throughout the development and deployment process. The test framework guides you through adding what you need. For example, once a developer builds a service and starts testing it, Choreo will suggest when you need to add OAuth tokens or keys. Choreo then does all the key management or token mediation across each stage.

Finally, developers no longer have to build their own versioning or API lifecycle frameworks when building new APIs and services. Lifecycle management is straightforward within Choreo because it’s built-in. Lifecycle states in Choreo include versioning, unpublishing, deprecating, retiring, or blocking an API. 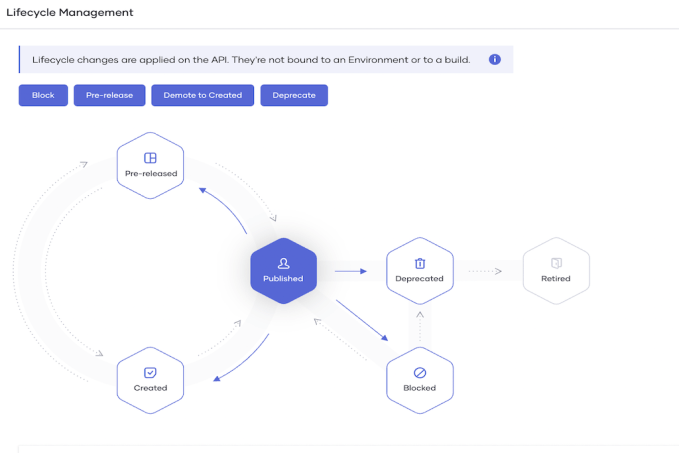 The end result is that developers are actually able to develop and deliver projects and code new APIs, in hours, as a DevOps team. It’s the speed of a low-code, graphical approach with the true flexibility of code that low-code has never been able to deliver. While it is absolutely true that low-code, even no-code, is needed for non-developers, developers need something better to create reusable APIs and services.

Choreo is a great example of how SaaS is innovating to make cloud native API and application development simpler and faster. We should certainly expect more of this in the future.

If you’re cloud-native and looking for a fast, simple, and secure way to create services, integrations, and APIs, Choreo is a great option for you.

But don’t just take my word for it. Watch the experts give an introduction to Choreo.

You can also just head over to https://wso2.com/choreo/ and sign up now. It’s free.

You can watch our video playlist to get started with Choreo.