Depending on whether you spend most of your time in hospitals, offices or in the great outdoors, when you hear “Canon,” your mind will likely go to medical scanning equipment, high-end printers or cameras. At CES this year, the 85-year-old company is leaning in a new direction, with an interesting focus on software applications.

At the show, the imaging giant showed off a direction it has been hinting at before, but this time relying far less on its own hardware, and more on the software the company has developed, in part as a response to the COVID-19 pandemic casting a shadow over people’s ability to connect. To the chorus of “meaningful communication” and “powerful collaboration,” the Japanese imaging giant appears to be plotting out a new course for what’s next.

“Canon is creating ground-breaking solutions that help people connect in more ways than we ever could have imagined, redefining how they work and live at a time when many of them are embracing a hybrid lifestyle,’’ said Kazuto Ogawa, president and CEO, Canon U.S.A., Inc, in a press briefing at CES 2023. “Canon’s ultimate role is to bring people closer together by revealing endless opportunities for creators. Under our theme of ‘Limitless Is More,’ we will show CES 2023 attendees what we are creating as a company focused on innovation and a world without limits.”

Among other things, Canon showed off a somewhat gimmicky immersive experience tied in with M. Night Shyamalan’s upcoming thriller movie, “Knock at the Cabin.” The very Shyamalanesque movie trailer will give you a taster of the vibe. At the heart of things, however, Canon is tapping into a base desire in humanity; to feel connected to one another. The company is desperate to show off how its solutions can “remove the limits humanity faces to create more meaningful communication,” through four technologies it is showing off at the trade show this year. 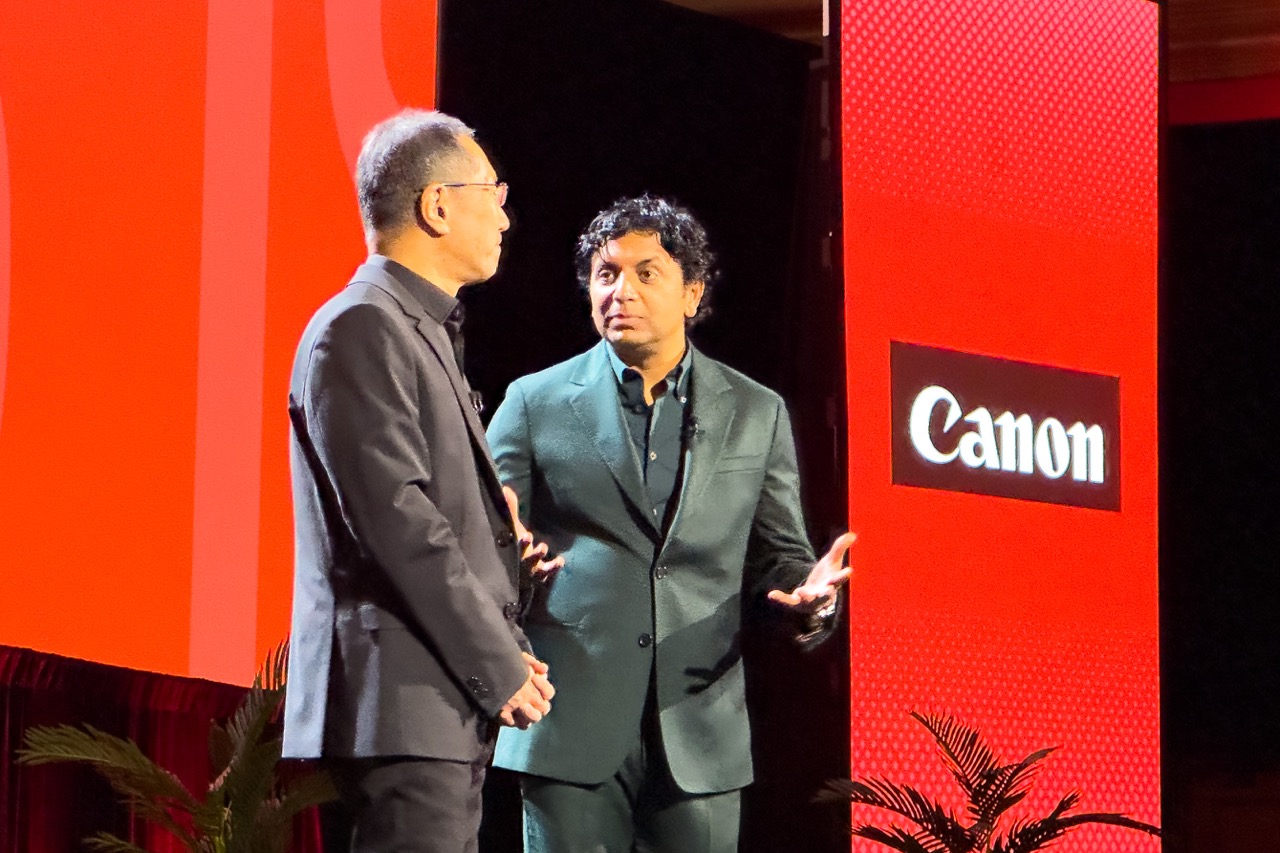 The flagship solution Canon is showing off is Kokomo, which the company describes as a first-of-its-kind immersive VR software package. It is designed to combine VR with an immersive calling experience. The solution is pretty elegant: Using a VR headset and a smartphone, the Kokomo software enables users to see and hear one another in real time with their live appearance and expression in a photo-real environment. 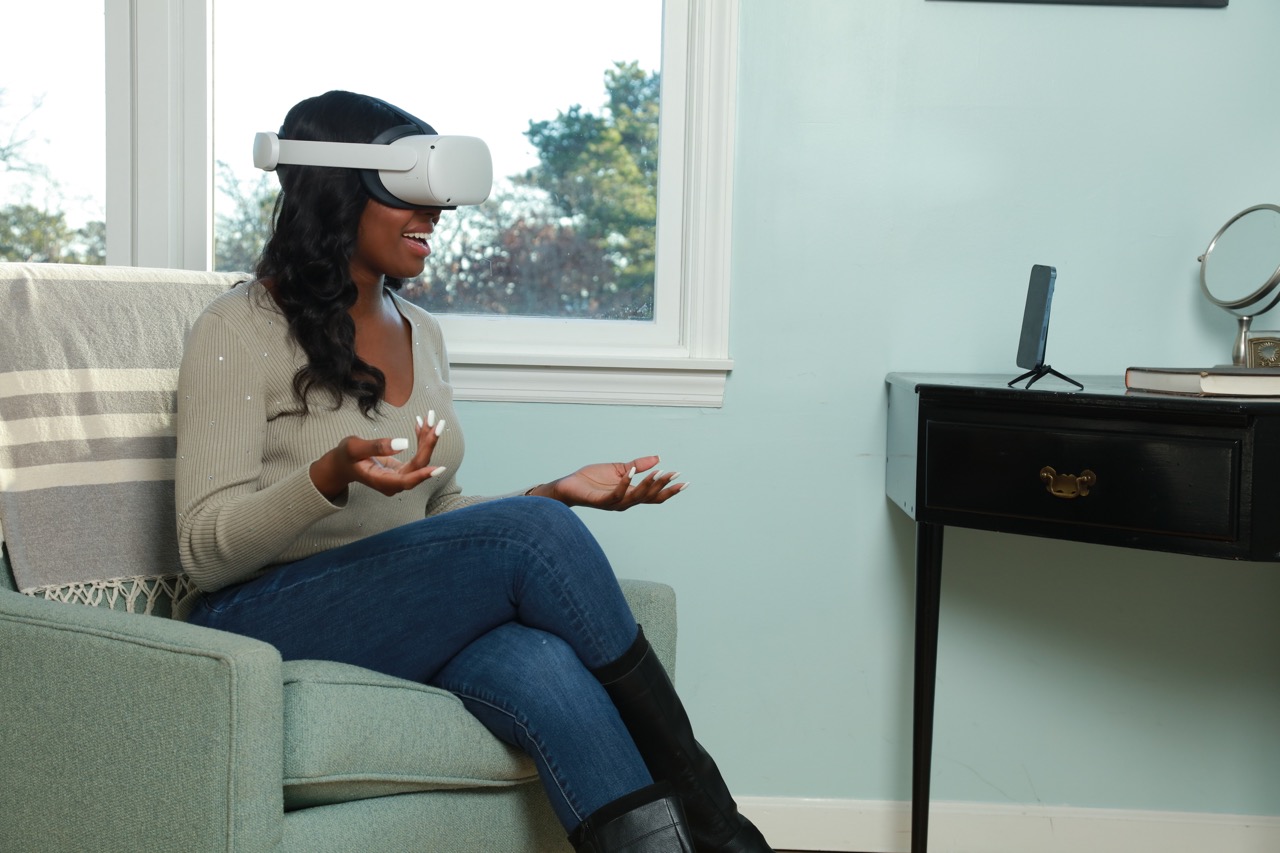 The Kokomo solution brings 3D video calling to a home near you. Image Credits: Canon

In effect, the software package scans your face to learn what you look like, then turns you into a photo-realistic avatar. The person you are in a call with can see you — sans VR headset — showing your physical appearance and facial expressions. The effect is to experience a 3D video call. At the show, Canon is demoing the tech by letting visitors step into a 1×1 conversation with the “Knock at the Cabin” characters.

We spoke with the team behind Kokomo to figure out how the project came about, why Canon is dipping its toe in standalone software, what the future of this technology is, and how it is going to make money.

With Kokomo VR meeting software, Canon takes a step away from its hardware roots

Aimed at the sports market, Free Viewpoint is a solution that combines more than 100 high-end cameras with a cloud-based solution that makes it possible to move a virtual camera to any location. The software takes all the video feeds, creating a point-cloud-based 3D model that enables a virtual camera operator to create a number of angles that would otherwise have been impossible: Drone-like replay footage, swooping into the action, for example, or detailed in-the-thick-of-things-type footage, enabling viewers to see plays from the virtual perspective of one of the players.

In the U.S., the system has already been installed at two NBA arenas (including at the home of the Cavaliers and the Nets). The video can be broadcast live or compiled into replay clips. Canon also points out that the system enables “virtual advertising and other opportunities for monetization,” so I suppose we have that to look forward to as well.

Returning to the “Knock at the Cabin” theme, at CES, Canon showed off a virtual action scene captured with the Free Viewpoint video system, captured at Canon’s Volumetric Video Studio in Kawasaki, Japan. The effect of watching an action scene “through the eyes” of various characters was a wonderfully immersive experience.

Canon also showed off some earlier-stage tech that isn’t quite ready for prime-time viewing yet, including MREAL. This is tech that helps integrated simulation-like immersive worlds, merging the real and the virtual worlds. Use cases might include pre-visualization for movies, training scenarios and interactive mixed-reality entertainment. The company tells TechCrunch that the technology is in the market research phase.

The company is trying to figure out what to develop further and how to market the product. In other words: Who would use this, what would they use it for and what would they be willing to pay for it.

Activate My Line of Sight (AMLOS) is what Canon is calling its solution for hybrid meeting environments, where some participants are in person, while others are off-site. If you’ve ever been in a meeting in that configuration, you’ll often find that attending remotely is a deeply frustrating experience, as the in-person meeting participants are engaging with each other while the remote attendees are off on a screen somewhere.

Canon hopes that AMLOS can help solve that; it’s a software-and-camera set of products aiming to improve the level of engagement. It adds panning, tilting and zooming capabilities to remote camera systems, giving remote users the ability to customize their viewing and participation experience. So far, the solution is not quite intuitive enough to overcome the barrier of not being in the room, but it’s certainly better than being a disembodied wall of heads on a screen.