As Elon Musk attempts to operate a major social media platform with a fraction of its staff, Twitter users are reporting that certain key security features on iOS are not working. For some users, it’s impossible to protect your tweets or toggle direct message privacy settings — a pop-up will appear that says “Some settings failed to save.” [Update, 12/7/22, 1:45 PM ET: A day after publication, Twitter Support tweeted that they fixed this error.] 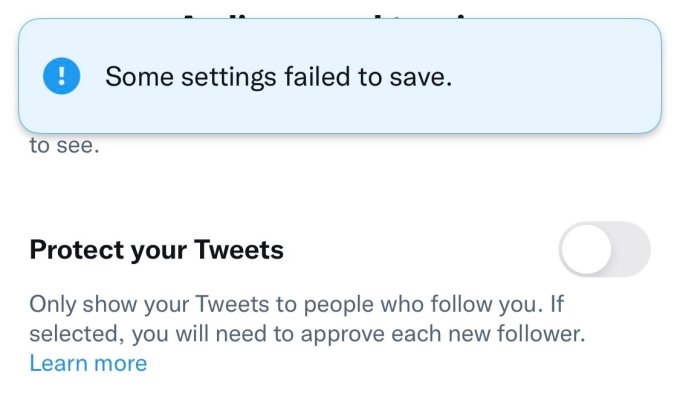 These key privacy features appear to still work on the web, even if they aren’t working on a user’s iOS app. Sure, in most situations, if a user really wants to go private, they can just find a computer and make the switch to turn on protected tweets. But in emergencies, it can pose personal risk for users if these central privacy toggles are not available on the go. Moreover, these errors could be seen as a harbinger of what could come at Twitter: Users worry that as Twitter’s team gets smaller, more features will break, and the site could become unsafe.

Last week, Twitter’s former Trust & Safety head Yoel Roth spoke at a Knight Foundation conference. When asked where he sees Twitter in a year, he said he doesn’t expect that there will be one specific moment in which the site implodes — rather, the user experience will worsen over time.

“What are the canaries in the coal mine that suggest that something’s not right?” Roth asked. “A couple of the things that I keep an eye out for are, have core safety features stopped working the way that you expect?”

Roth said that the site will be particularly unstable if the protected tweets feature stops working.

“That’s an easy one to screw up if you are building Twitter and you don’t know what you’re doing, and there have been a number of historical privacy breaches that Twitter has had to deal with related to protected tweets,” he said. “If protected tweets stop working, run, because that’s a symptom that something is deeply wrong.”

The current errors users are experiencing when trying to protect their tweets are not indicative of the entire feature not working — but of course, it’s not a good sign.

Twitter co-founder Biz Stone even tweeted about issues he was experiencing on iOS yesterday. According to his screenshot, his mentions aren’t loading on iOS. Gizmodo reported that its staff has experienced this issue at least three times in the past week, and also reported that some users are experiencing glitches with Twitter Spaces.

Can’t wait until someone mentions me! pic.twitter.com/QR7aTcZMe9

These iOS issues are occurring in the midst of conflict between Apple and Twitter — Musk claimed last week that Apple threatened to withhold Twitter from the App Store, but he later characterized that as a “misunderstanding” after meeting with Apple CEO Tim Cook. Musk had gone as far as to declare that he would make his own smartphone if Apple and Google removed Twitter from their App Stores.

Still, vulnerable communities on Twitter — like sex workers — have feared that Twitter could remove or demote their NSFW content to appease Apple, which has previously removed social platforms like Tumblr from the App Store for not adequately moderating child sexual abuse material (CSAM). But for adult creators who make consensual, safe content, Twitter is the only major social platform where they can promote their work without violating content guidelines. When these creators have been booted from platforms like Tumblr and Patreon, their livelihoods are threatened, since they have to start building their audience from scratch elsewhere.

Some sex workers have noticed that suddenly, their tweets are being flagged as containing sensitive content, and are unable to be viewed. On the web version of Twitter, you can click and unclick a box that says “Display media that may contain sensitive content.” On iOS, users do not have the option to toggle that setting on or off. Even SFW accounts of advocacy groups representing sex workers have been flagged as sensitive for some iOS users, even for those whose web settings indicate that they are willing to see sensitive media.

Four accounts that advocate for sex workers’ rights as seen on iOS, with posts marked as sensitive. Screenshots provided to TechCrunch.

“We know what we are seeing is a bug, but I believe it to be of the botched roll out, A/B testing, rush job variety,” Ashley, a sex worker and community organizer, told TechCrunch. “This may not be intended functionality today, but we must seize on this glimpse of a possible future to make sure this disdain for basic human rights, user agency, and broad untransparent censorship is categorically unacceptable.”

Elon Musk has not explicitly commented on how Twitter will handle legal NSFW content going forward. But under Musk, Twitter has expressed interest in a paywalled video feature, which is reminiscent of platforms like OnlyFans, which allow NSFW creators to monetize. Paid DMs, also a common feature in online sex work, has been spotted in development by app researcher Jane Wong.