Cloudflare, the security, performance and reliability company that went public three years ago, said this morning that it will help connect startups that use its serverless computing platform to dozens of venture firms that have collectively offered to invest up to $1.25 billion in the companies out of their existing funds.

It’s a smart, splashy incentive to entice more startups to use the now five-year-old product, which, according to Cloudflare, enables developers to build or augment apps without configuring or maintaining infrastructure. Cloudflare notes in a related press release that startups can scale so fast using the platform that Cloudflare acquired one last year: Zaraz, a startup that promises to speed up website performance with a single line of code. (Cloudflare isn’t promising to acquire other startups, but the suggestion is in the air.)

Indeed, this funding program, as far as we can tell, is really about Cloudflare taking aim at hugely lucrative products like AWS, Azure and Google Cloud. Toward that end, we asked Cloudflare CEO Matthew Prince over the weekend why Cloudflare thinks it can steal market share from these much bigger companies.

“I wouldn’t characterize it as ‘stealing’ market share from anyone,” he said. “It’s a matter of earning market share, and the way you earn market share is by providing a better product at a more affordable price.”

Asked how much more affordable, he said merely that it’s “significantly less expensive than the legacy public clouds” because of how it’s built. As Prince explains it, modern browsers “encounter new, untrusted code with nearly every page they open online today. They need a way to quickly and safely execute that code [and use a] technology called isolates to achieve that.” Cloudflare Workers, which is the name of the platform, “takes the isolates technology inspired by the browser and makes it available as a developer platform.”

The pitch appears to be resonating with programmers. Cloudflare — whose shares have gotten walloped in 2022 along with other tech stocks, but which is holding up well comparatively — doesn’t break out revenue by product category. But it says that 20% of Cloudflare’s contracted customers use Cloudflare Workers. It also says it’s on track to have more than 1 million developers using the Cloudflare Workers platform by the end of this year. 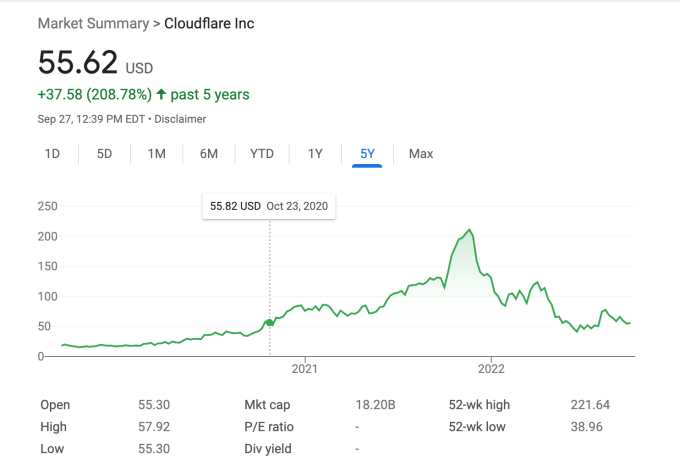 This new tactic is part of that picture.

Prince said the idea to connect startups on its platform with venture funding came out of existing relationships it has with VCs who’d begun noticing that more of their portfolio companies are using Cloudflare Workers as their developer platform. “When they did due diligence,” said Prince, the VCs would “push [founders] on ‘why Cloudflare and not a platform like AWS,’ [and] the answer that startup after startup gave was that Cloudflare Workers scaled better, had better performance, and was less expensive to operate.”

“If you’re a VC and you hear an answer like that multiple times from the most promising startups it causes you to take notice,” he added.

Further, in addition to potential investment from these VCs, startups applying for the funding program will be eligible a number of other Cloudflare initiatives meant to accelerate startups and access to “exclusive” events.