Over the past decade, startups migrated north from Silicon Valley to make San Francisco the country’s hottest tech hub. The streets of the city were bustling as throngs of — mostly tech — workers walked or caught Ubers to their next meetings.

Then the COVID-19 pandemic hit, and things slid to a halt. Now, more than two years and several vaccines later, San Francisco’s office scene has still not rebounded and the city’s streets remain eerily quiet.

If you think it’s even more sparse than other cities you’ve visited lately, you’re right. San Francisco is seeing the lowest attendance rates for office employees in the United States, according to Colin Yasukochi, executive director of real estate brokerage CBRE’s Tech Insights Center. Silicon Valley is not far behind.

Turns out the region’s heavy reliance on tech workers has also slowed down its recovery, with many local employees continuing to insist on remote work, and employers grudgingly allowing it.

Tech companies, said Yasukochi, have “been the most accommodating in terms of offering flexibility and not requiring their employees to come back for any number of days. Some certainly have [asked staffers to come back]. But what their policy is and what their compliance is are two different things.”

He added: “They’re saying you need to be back three days a week, and if you’re only back two days of the week, or one day a week, or not at all, what are they doing to enforce that? And the answer to that question is, not a lot at the moment.”

Why tiptoe around the issue? Well, despite the fact that the tech industry has seen tens of thousands of workers laid off in recent months, Yasukochi believes that a still-strong labor market that provides employees with plenty of options has “a disproportionate amount of influence” over remote work policies.

As he explained it, “It’s still very difficult to hire, unemployment remains pretty low, tech workers have been traditionally difficult to hire for, and so many employers are worried about accelerating the normal turnover that they already have.”

Bottom line, they’re scared. And it’s not just startups that are worried about losing employees. Some of the biggest and most powerful companies have backed off, or at least delayed their return to work plans, because of pushback they received from their employee base. Examples include Apple and Google, among others.

So just how low are attendance rates for office workers in San Francisco?

According to Kastle Access Control, in mid-to-late August, San Jose had the lowest attendance rate at 34.8% compared to pre-pandemic levels. San Francisco was not too far behind, at 38.4%, including the East Bay and the Peninsula. By contrast, emerging tech hub Austin’s attendance rate stood at 58.5% in mid-August.

Supply way up, rents only slightly down

Despite so few workers actually going in to the office and the amount of supply on the market in SF having gone up dramatically, rent prices are only down 13.1% since the first quarter of 2020 — from an all-time high of $88.40 per square foot annually then to $76.86 in the second quarter of 2022, according to Yasukochi.

Meanwhile, vacancy rates in San Jose stood at 6% at the end of 2019. They are now at 12.5%, which is “not very high relative to the city,” noted Yasukochi.  And office rents have remained the same compared to the end of 2019.

If you’re curious why San Jose is faring better than its northern neighbor, Yasukochi says it owes to the types of businesses in both cities. While San Jose is home to stalwart businesses like eBay and PayPal that were established over two decades ago, San Francisco has a higher concentration of less established startups that had a harder time surviving and thriving in the pandemic, from companies involved in mobility and transportation to retail to restaurants.

“When there was a shutdown, business went south, and though they have since recovered, many have laid off and reduced office space,” he told TechCrunch. “And also when many companies decided they were going to go remote first, they needed a lot less office space than before.”

Either way, employees still have the upper hand for now. But things will gradually change, Yasukochi believes.

“The pendulum tends to swing in different directions based on different conditions in the marketplace,” he said. “We will eventually start to see more influence in the hands of employers as the labor market may be loosened up a little bit, although there’s no sense that the labor market is going to change dramatically anytime soon.”

In the meantime, the question on many people’s minds is — with an ongoing housing shortage and an oversupply of office inventory — why more office buildings aren’t being converted into residential units.

Yasukochi suggests some space could potentially be converted in the future, but that right now, it’s too bitter a prospect for commercial building owners.

“We’re not anywhere close to that yet because the values of these buildings need to come down dramatically,” Yasukochi said. “If you bought your building for a certain price — say $700 or $1,000 a square foot, you’re not going to want to sell for $200 or $300 a square foot to make a residential conversion feasible.”

“It’s completely logical to put it to more productive use, but tell that to the person who paid for it — that they have to take a loss, right?”

Maybe landlords have reason to hold out hope. Not all employers in San Francisco are letting employees mostly work from home.

The Information recently reported that startup Merge “has chosen to go all in on in-person work.” The company — which aims to give B2B enterprises a unified API to access data from dozens of HR, payroll, recruiting and accounting platforms — is mandating that all its employees be in the office five days a week, a rarity in the Bay Area.

Some 75% of the company’s 450 employees are required, unless exempted, to come in to the office on Tuesdays and Thursdays. The remaining 25% “will either be in the office full-time, completely remote or mostly remote,” reported Axios.

Chief people officer Ashley Alexander of Front told TechCrunch that the nine-year-old company — originally founded in France — has had an office in San Francisco for about eight years.

Front reopened its U.S. offices in March 2021 on a voluntary basis. After “extensively” surveying its team to hear what they wanted in a new post-COVID work structure, Front determined it made the most sense to require people to come into the office on the same days, even if not every day. 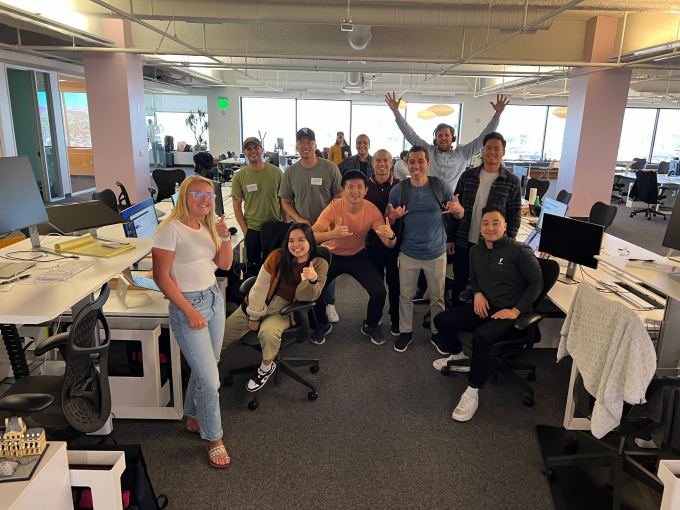 “We wanted to be deliberate about this because having just a handful of people spread across a big empty office doesn’t achieve what our team is looking for. We want to ensure that on days when employees come to the office, they’re feeling the bustle, energy  and warmth of their team around them,” she said. “If everyone could select their own days to come in, we might have small groups every day of the week — and employees that didn’t organize when to come in together might never get to meet.”

Still, she acknowledged that Front is only a couple of months in on its new approach, and is “monitoring the return to office process closely” to see how it will need to adapt and adjust.

Just how this tug of war will play out over time remains to be seen.