Modern DevOps turned back the clock on agile software development. Them’s fighting words, but they’re words Cory O’Daniel, the CEO of Massdriver, stands by. From his point of view, engineers today are often stuck waiting on other teams so that they can write code, creating frustrating bottlenecks.

“DevOps was supposed to be practices,” O’Daniel told TechCrunch via email. “[It’s] not agile, it’s ‘waterfall.’ Modern DevOps is waterfall in agile clothing.”

Some surveys show that DevOps is indeed hampered by challenges with infrastructure. According to CloudBolt, 11% of developers responding to a 2021 poll found their CI/CD infrastructure reliable while over half (55%) had difficulty creating consistent pipeline environments.

That’s why O’Daniel, together with Chris Hill and Dave Williams, co-founded Massdriver in 2021. Massdriver’s platform is designed to assist with managing infrastructure and apps at enterprises, allowing engineers to deploy infrastructure without cloud expertise.

“Williams and I were working on a side project and we got into an argument about who was going to do the operations work. Here we were, two seasoned ops engineers with more than 15 years experience each in cloud operations, arguing over who was going to have to do the grunt work,” O’Daniel said. O’Daniel was previously principal software architect at The RealReal and a cloud solutions architect at Container Heroes, an IT consultancy. “We both just wanted to write value-producing software for the business. This is where the idea of Massdriver was born.” 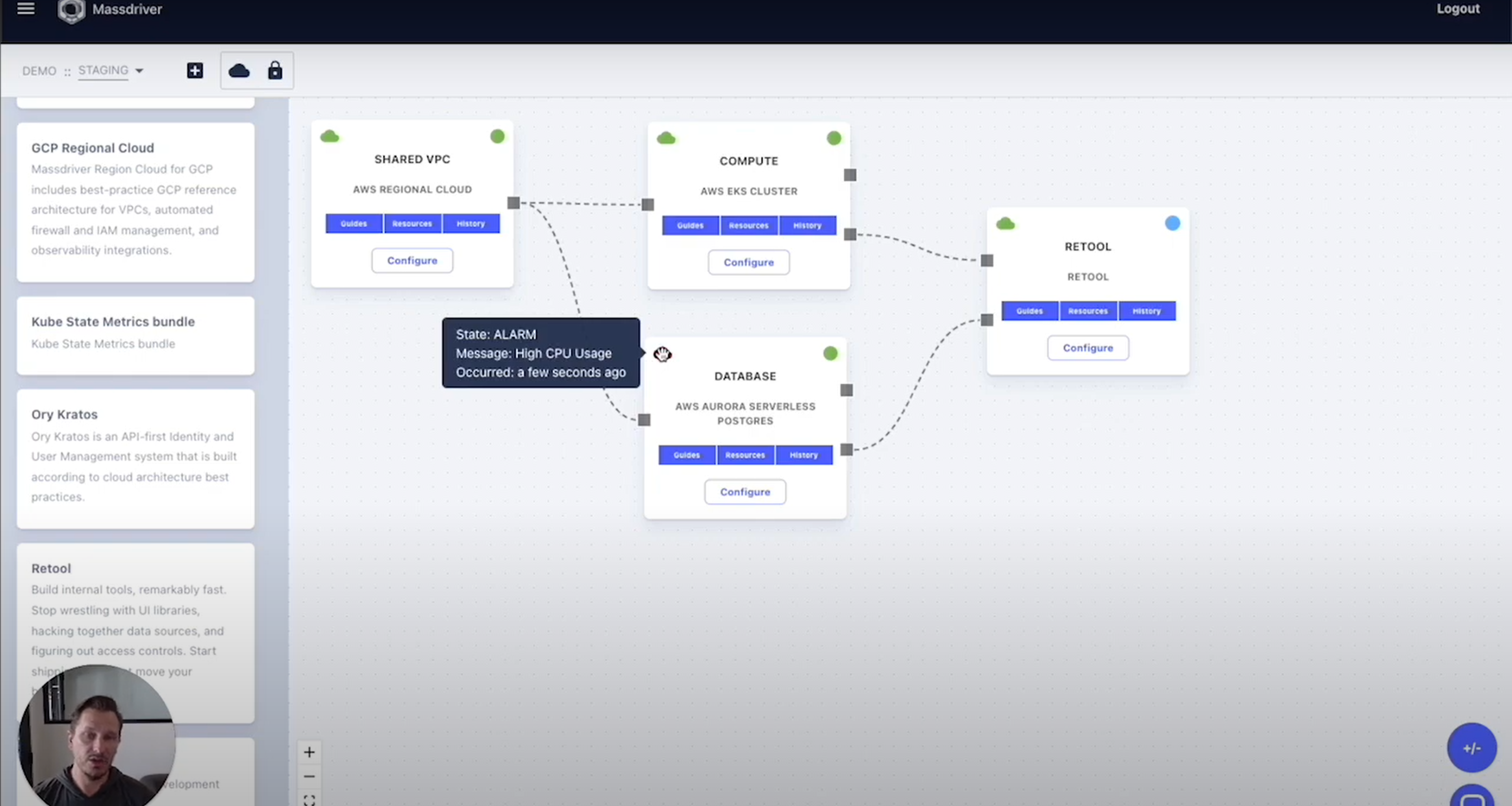 Using Massdriver, customers choose from prebuilt infrastructure “bundles” that they can connect to create systems across regions or cloud providers with a visual tool. Postdeployment, the systems can be monitored from Massdriver’s admin dashboard, which also helps orchestrate features like cloud outage detection and automated status pages.

O’Daniel emphasized that Massdriver’s alert notifications take users to a diagram of their infrastructure and highlight the impacted components, rather than forcing them to hop between tools like PagerDuty, Datadog, and Terraform. This month will see the release of continuous deployment support, complementing the existing support for container registries and DNS management.

“We are taking a different approach to building out internal developer platforms … We give engineers a diagramming interface. It’s their source of truth. It’s their documentation when onboarding new teammates. It’s how they managed and monitor their infrastructure,” O’Daniel said. “We want to meet companies where they are at and let them pick the best tool for the job.”

Since soft launching in March, O’Daniel says that Massdriver has reached “well into” six-figure annual recurring revenue and “mid-80%” gross margin. (Gross margin is the difference between revenue and cost of goods sold, divided by revenue; a figure above 75% is considered healthy.) Despite competition from Upbound and Humanitec, the company has around 100 developers across 35 organizations managing over 80 compute environments, and plans to expand its 11-person workforce within the next month.

Recently, Massdriver — which is backed by Y Combinator — raised $4 million in seed funding. O’Daniel says that the funds will be used to exit the minimum viable product phase and “continue to make the product simpler for all caliber of engineers to deploy production-ready infrastructure.”

“Massdriver enables engineers and IT staff to deliver secure infrastructure faster with guardrails — less worrying about infrastructure, more confident delivery … Anyone in the org can open the tool and get insights into infrastructure, data services, and applications at a glance,” O’Daniel said. “At Massdriver, we want to let engineers engineer so they can focus on delivering business value, not toiling over configuring commodity infrastructure — and that’s what the C-suite wants, too.”