Anyone who has ever applied for an apartment or a mortgage knows that these companies tend to collect much more information than they need to determine if you can afford the monthly payment. The application process often involves pages of data about you and your life, but what if companies could grab in a secure way just the data they need?

That’s the premise behind Footprint, an early-stage startup that wants to transform the way companies collect information, while helping consumers control their own data. It’s an ambitious idea, and the startup announced a $6 million seed investment today.

“For end consumers, Footprint is the last identity form that they’ll ever fill out. For enterprises, Footprint is just five lines of code. And it gives our customers the ability to both onboard users and do account creation or ‘Know Your Customer’ (KYC) and offload the cost and risk of all of the security that has to happen around storing that data,” company co-founder and CEO Eli Wachs told TechCrunch.

The company’s goal is to create a tool that’s not unlike Apple Wallet, but for your data, so it would hold your private information in an encrypted format using a mobile device to ensure identity. “Footprint securely holds consumer verifiable credentials (such as Social Security number, date of birth, email, phone number) in a protected “secure enclave”, backed by hardware-level cryptographic attestation,” the founders explained.

The company then takes advantage of Face ID or Touch ID on your phone for proof of identity to access and share that information with trusted partners. 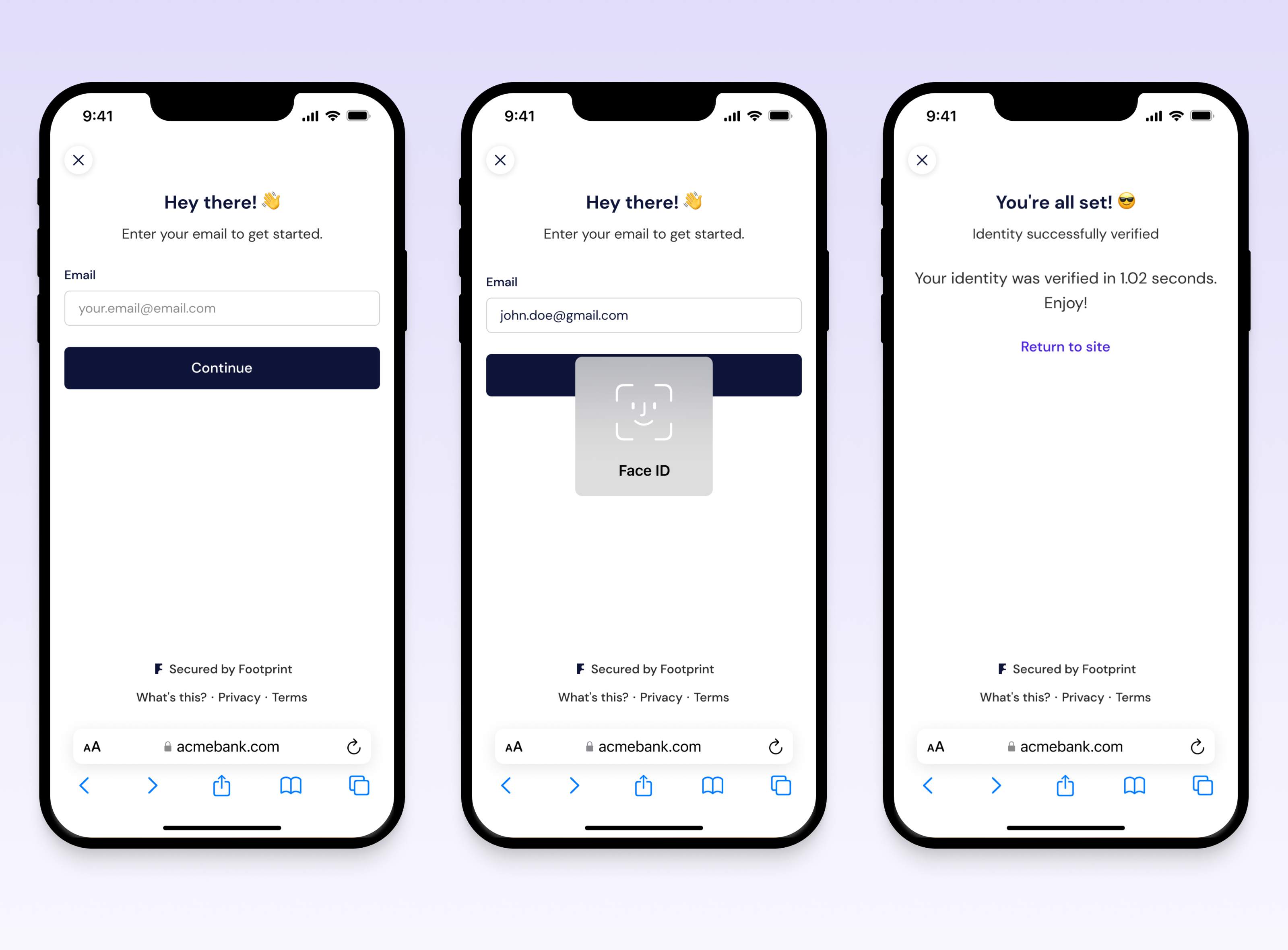 Company co-founder and CTO Alex Grinman, who was previously a co-founder at KryptCo, a startup acquired by Akamai in 2019, says on the back end, the company is taking advantage of the concept of secure enclaves originally developed by AWS. He used the example of proving someone is over 21 to get into a bar.

“Well, you don’t have to decrypt their birthdate, and then do that computation and application code. You can do it inside of the secure enclave, and so we only release the minimum amount of information that you need,” he said. That approach has additional advantages, as well.

Today, the company can collect and store name, email, phone number, date of birth, address, Social Security number with the option to add things such as verifying an income source, which includes your employer and income and verifying a business that you own, Wachs explained. The ambition over time is to be able to handle all of the data you would need to apply for something like an apartment and remove all of the friction involved in the current paper-based systems most companies are still using, while allowing users to share their Footprint data with any trusted partners.

Shardul Shah, a partner at investor Index Ventures, sees a company with smart founders trying to solve a difficult problem in an industry with a lot of room to grow.

“I think that the identity market is massive, and there’s been a lot of commercial activity surrounding the industry because there’s a lot of valued exchange, but it’s fundamentally broken. Most people have a point of view that there’s a trade-off to make. Either you’re low friction or you’re high accuracy. And I think what’s daring and difficult is the point of view that Alex and Eli share, which is you can deliver both. You can be low friction and easy to use, by a range of stakeholders by the way, as well as incredibly accurate,” Shah said.

The company currently has seven employees, but as it grows, Wachs says diversity is an important value for the startup. “We think diversity is incredibly important. Alex and I are really proud of a team that doesn’t look like us. We’re the only two people who look like us on the team. And we know of a lot of companies that kind of make big diversity hiring efforts when they’re later stage, and to us if it’s not a priority from the start, it is not really a priority,” Wachs said.

The product is currently in early access release, but the company plans to make it generally available in the fall.