During the pandemic as businesses moved online, Spinach.io co-founder and CEO Matan Talmi observed that engineering teams had a specific set of needs for online meetings than other teams. At about the same time, he noted that Zoom was releasing Zoom Apps to help developers build meeting-focused applications on top of the Zoom platform.

He and his co-founders decided to build a meeting tool designed specifically for engineers using agile methodology to run stand-up meetings online. They wanted to bring a level of automation to the stand-up by integrating with Slack, Jira and other tools engineers use to track their projects, and last year they began building the product. Today, the startup announced a $6 million seed, which is a combination of funding it has received since launching in 2021.

“What we were trying to do here is really solve a very specific use case for engineering teams that follow the Scrum Agile development process. They have unique meetings and workflows around those development sprints and require specific experiences to really provide deep value,” Talmi told TechCrunch.

He said that while anyone can benefit from organizing meetings with a specific agenda and shared meeting notes, Spinach is focusing on the standup meeting that agile engineering teams start each day with. “We started with one very specific meeting type, which is the daily stand up, and which is at the core of a good development sprint, the daily check. This is where the teams meet every morning, and so we built it as an experience that specifically facilitates that kind of meeting and helps you run it on autopilot,” he said.

Because it integrates with project management software like Jira, it can pull in the goals from the previous day, the goals for the current day and any blockers the team might have that are preventing them from meeting their goals. It’s also integrated with Slack to move information back and forth in the engineering communications channel. 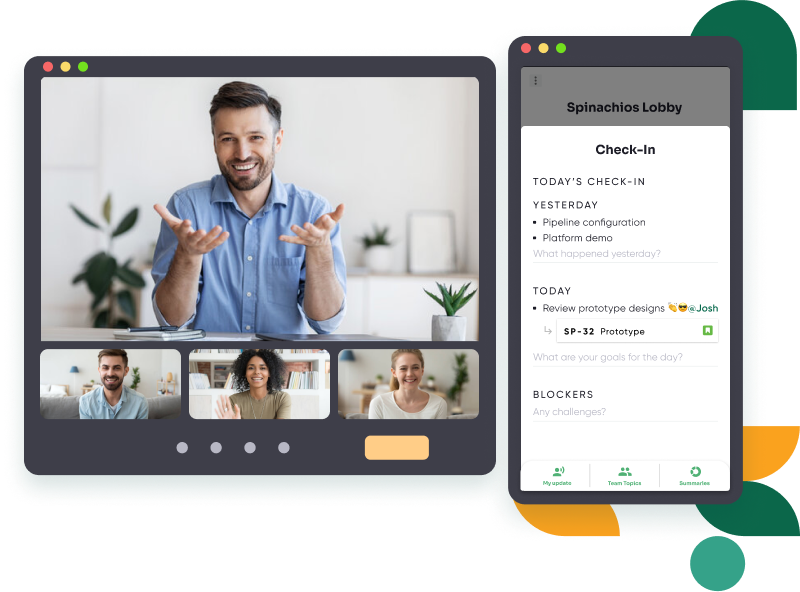 While it is integrated natively in Zoom, it can run with other online meeting tools like Microsoft Teams and Google Meet with the web tool. It also has plans to integrate with other project management tools like ClickUp, Asana and Monday.com and other services engineering teams tend to use like Figma, Notion and GitHub over time.

The company is also publicly announcing the tool today for the first time, but it has been working in private beta for some time and has 100 teams working with the tool including teams at Wix, Fiverr and Rappi.

He said the engineering standup meeting is the first use case, but he envisions expanding the product to incorporate other engineering meetings over time. The company recently completed a stint at Y Combinator as part of the Winter 2022 cohort.

Talmi says that the experience at YC showed he was onto something with this idea. “When we had our early conversation with the Y Combinator founders, they were really excited about what we were doing because they kind of had this sneak peek at what the next generation of companies were going to look like and pretty much across the board everyone was starting a remote-first company,” he said.

While Talmi sees the mixed economic conditions like everyone else, he thinks his company’s products are suited to any environment, especially as more companies go remote. “A lot of companies are struggling to get people back at the office, and there’s this tension, which a lot of people have been talking about in recent months … And it’s becoming clear that even with a market downturn, there’s going to be long-term shift about how people work and how companies operate with remote work really becoming kind of the standard default.”