Historically, the amount of information available about listenership was restricted to what could be obtained from sales data, such as which best-selling album sold the most during a given month or the region where sales were the highest.

The digitization of music consumption has opened entirely new data sources. Demographics, locations and listener habits are now at the forefront, allowing for real-time measurements that were previously determined solely on subjective assumptions from executives. Artists no longer need to wait until a chart is released to determine how successful they are.

Mandolin has now transformed into an all-in-one data unification and recommendation platform that provides fan profiles, data, campaign trends, and playbooks that have tailored marketing recommendations. So, artists can get the direct-to-fan marketing that they want but don’t necessarily know how to accomplish.

Fan Navigator brings together online and offline data, combining its own data with Chartmetric’s streaming and social stats to help artists understand fans down to the individual. Other data sources include Mailchimp, Shopify, Square, Music Today and Stripe, as well as CSV uploads, and more. A CSV is a comma-separated values file that allows data to be saved in a tabular format (think spreadsheet).

So instead of managers and artists tracking and reporting data from multiple sources, Mandolin includes more than 75 metrics tracked all in one dashboard, eliminating the need to consolidate information from various stores and services. All the data will be owned 100% by the artist.

“We’re delighted that Fan Navigator is providing even more artists with instant access to essential insight and helping them make decisions that will allow them to expand and build stronger relationships with their audiences,” said Chaz Jenkins, chief commercial officer, Chartmetric, in a statement.

Artificial intelligence will segment fans into categories, from casual to superfan, and advise artists how to help move fans further along toward the superfan category. Fans can also be organized by geolocation, income and behavior. 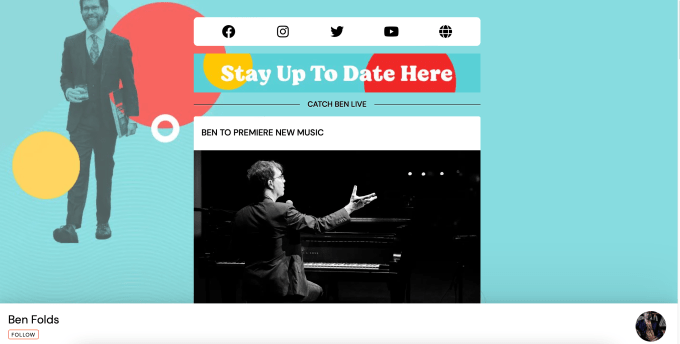 When Mandolin first launched in 2020, it was during a time when artists put touring on hold and were looking for digital experiences to keep fans engaged. Mandolin not only allowed artists to livestream concerts, album release livestreams, VIP experiences, meet and greets, live chats, watch parties, NFTs and more, but also its Fan Experiences feature allowed artists and their teams to collect a small amount of data.

Mary Kay Huse, co-founder, and CEO of Mandolin, told TechCrunch, “From the beginning, we were sharing the value of the data we were collecting; not just when fans bought tickets, but also how they engage — if they upgraded with merch or VIP experiences and how long they were engaging. Different insights about the fans that [artists] really never had insight into.”

However, according to Huse, even when touring came back, artists still weren’t “taking full advantage of the data and insights we were providing them.”

The fan data Mandolin offered before the launch of Fan Navigator was “only a small slice of their overall fan universe,” she said. “So while [artists] didn’t have access to the data, they knew in aggregate how many fans are following them on Spotify and other [demand-side platforms], and how many ticket sales they had in the past. They don’t have their [Personal Identifiable Information], but they knew roughly how many fans existed, and so they wanted to know how they could access that larger universe,” Huse added.

Plus, some managers and artists aren’t exactly sure what to do with all this data. Huse said, “So we realized the opportunity to expand our product offering and in particular with Fan Navigator was to address today’s drivers. This next chapter and with the launch of Fan Navigator, it really is for us to hone in on what we believe to be the key to artists truly owning their overall development and fandom, which is all about data and context.”

Mandolin is an Indianapolis-based startup used by more than 1,000 artists, including Lil Wayne, Fitz and The Tantrums, Andrew Peterson and more. There are, on average, 50 to 75 shows a month, the company told TechCrunch.

In May, Mandolin launched a Venue and Promoter Network, giving artists and their teams a list of U.S. venues for hosting livestream concerts. Mandolin also has a new rewatch feature that saw success in the past few months. From April 1, 2022, to June 30, 23 shows included rewatch as a complementary part of the in-person ticket or as a ticket add-on for purchase. Thirty-six percent of in-person attendees bought rewatch in the same three-month period.