When Elon Musk announced his intention to terminate his $44 billion bid for Twitter, the social media company didn’t give up easily. Today, Twitter sued the SpaceX and Tesla CEO for refusing to uphold his contractual obligation to buy the platform. The company’s lawyers claim that Musk’s concerns about Twitter’s bot numbers are illegitimate.

When you agree to buy a slow-growing social media platform for more than it’s worth, there’s no take-backsies, unless the company seriously misrepresented itself. Even though Twitter handed over its “firehose” of internal data, Musk claimed the trove of information wasn’t sufficient. So he extended his ongoing public tantrum over Twitter bots, which culminated in his declaration that the deal was off.

As Twitter wrote in its lawsuit against the erratic billionaire, “Musk apparently believes that he — unlike every other party subject to Delaware contract law — is free to change his mind, trash the company, disrupt its operations, destroy stockholder value, and walk away.” In response to the lawsuit, Musk tweeted, “Oh the irony lol.”

Anyone with a Twitter account (even the bots!) has seen that Musk has been tweeting through it. Based on the memes he’s posted, it wasn’t shocking at all that he was getting cold feet about his $44 billion impulse buy — especially in light of the stock market downturn.

Twitter’s lawyers agreed: “In his press release announcing the deal on April 25, 2022, Musk raised a clarion call to ‘defeat the spam bots.’ But when the market declined and the fixed-price deal became less attractive, Musk shifted his narrative, suddenly demanding ‘verification’ that spam was not a serious problem on Twitter’s platform, and claiming a burning need to conduct ‘diligence’ he had expressly forsworn.”

How do you prove that an extremely online, mega-wealthy troll is trying to dupe you? You show the receipts. And the receipts in this case happen to be memes.

Twitter’s lawsuit against Musk has more pictures than your standard legal filing. Throughout the 62-page document, the plaintiff shares several images of Musk’s tweets (mostly memes about the acquisition) to prove that he has acted in bad faith. Of course, they included the poop emoji that Musk tweeted Twitter CEO Parag Agrawal when he attempted to answer the mogul’s spam inquiries. 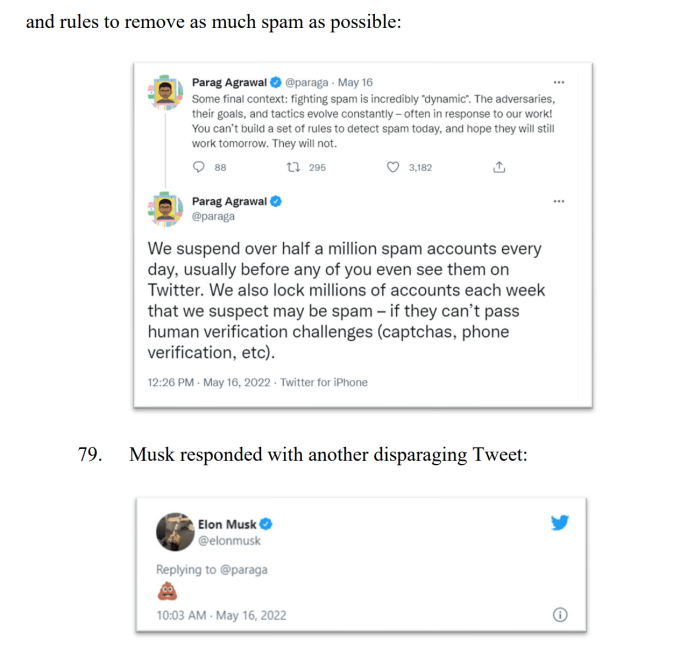 As part of the agreement between Musk and Twitter, Musk is in violation if he disparages the platform. According to Twitter, that poop emoji does, indeed, count as disparagement, but the platform’s lawyers pulled several more tweets to make their case. In two other instances, Musk tags the SEC’s Twitter account and calls upon them to investigate Twitter’s financial disclosures, which have claimed that more than 95% of monetizable daily active users are humans. As the lawsuit reads, “Musk’s conduct simply confirms that he wants to escape the binding contract he freely signed, and to damage Twitter in the process.” 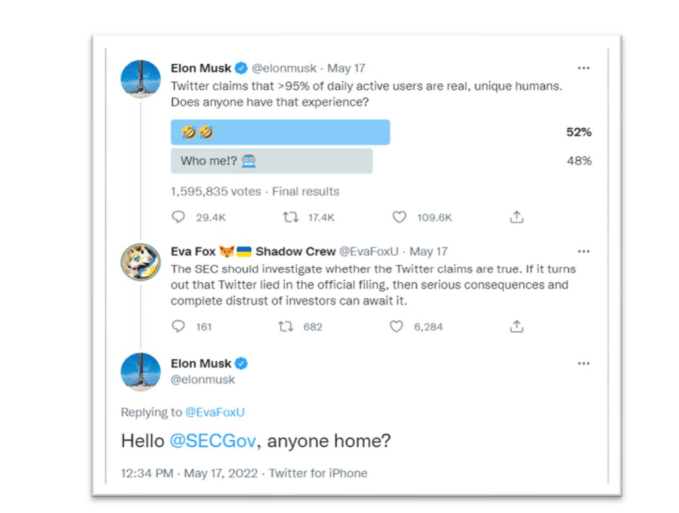 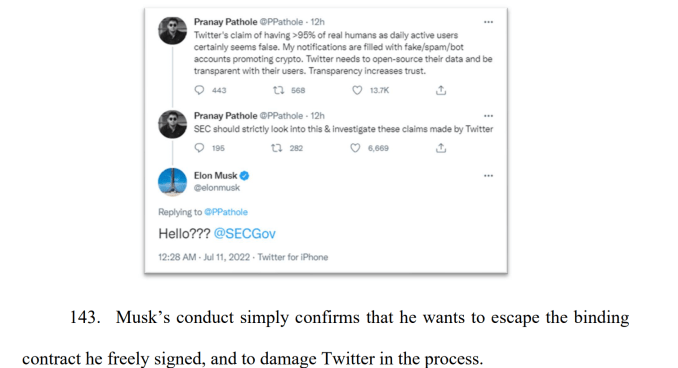 Twitter’s lawyers also included a meme that Musk posted just yesterday, which shows the billionaire laughing alongside text making fun of the platform: “They said I couldn’t buy Twitter. Then they wouldn’t disclose bot info. Now they want to force me to buy Twitter in court. Now they have to disclose bot info in court.”

Then, he tweeted a meme of Chuck Norris playing chess and declared, “Chuckmate.” 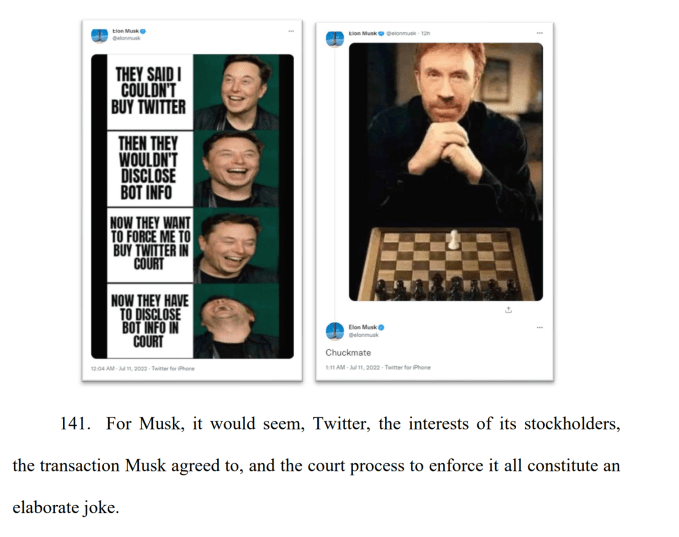 Does Elon Musk understand that Chuck Norris memes haven’t been funny since before Tesla manufactured its first car? Perhaps he’s too busy single-handedly increasing the U.S. birth rate to keep up with pop culture. Regardless, Twitter used these memes to argue that Musk sees this hugely impactful acquisition as “an elaborate joke.”

This is far from the first time we’ve seen memes hit the courtroom — in 2013, the creators of the memes Keyboard Cat and Nyan Cat earned a settlement after suing Warner Brothers for unauthorized use of their copyright in a video game. That incident alone was almost 10 years ago. Now, even your tea-spilling group chats can get subpoenaed and prominently displayed in a New York Times feature.

It’s not even the first time that Musk has gotten in serious legal trouble for his bad jokes.

In 2018, Musk tweeted that he was considering taking Tesla private for $420 a share and had already secured funding. Of course, he was just making a low-hanging weed joke, so the SEC charged Musk with fraud over “false and misleading” tweets. As a result, Musk stepped down as Tesla board chairman, the company paid a $20 million fine, and after making an agreement with the SEC, he now must have tweets about Tesla proofread by lawyers-turned-“Twitter sitters.”

This is, however, the first time that memes will play a role in determining the fate of a massive corporate acquisition. We hope the judges at the Delaware Court of Chancery have fun.

Twitter sues Elon Musk to force him to seal the deal