Ever spend much too long trying — and failing — to rediscover articles you’ve partially read? This reporter’s been there, and it seems I’m not the only one. According to a 2021 Carnegie Mellon study on browser tab usage, many participants admitted to feeling overwhelmed by the amount of tabs they kept open but were compelled not to close them out of fear of missing out on valuable information.

Samiur Rahman is familiar with the feeling — so much so that he co-created a product, Heyday, to alleviate it. Launched in 2021, Heyday is designed to automatically save web pages and pull in content from cloud apps, resurfacing the content alongside search engine results and curating it into a knowledge base.

“I co-founded Heyday in 2021 with Sam DeBrule. Sam and I had recently shut down a product in the knowledge management space that failed to get traction,” Rahman told TechCrunch via email. Rahman was previously a software engineer at Amazon, while DeBrule co-founded two startups, Ventfull and Tempo, before joining Heyday. “In the process of building the product, we met a group of early adopters who felt underserved by popular knowledge management tools that require constant manual input. We were still passionate about helping people handle information overload, so we decided to use our expertise in machine learning to build a product that relies heavily on automation to free people up from repetitive tasks and use their information more effectively.”

Heyday, whose client comes in the form of a browser extension (for Chrome, Firefox, Brave, Edge and Vivaldi) and apps for desktop or iOS, can pull in files, links, browser histories and conversations from platforms including Google Docs, Dropbox, Slack and Twitter. During setup, users indicate topics of interest to them, connect their accounts and optionally sign up for a daily “Flashback” email that resurfaces recently researched subjects. Searches can be conducted in the user’s public engine of choice (e.g. Google, Bing) or from Heyday’s search interface, which recognizes prompts for things like calendar events, file types and even recipes and Twitter profiles.

Powering the system is an AI model trained on more than 15GB of English text scraped from the web, which performs “similarity scoring” for each search to match content based on its semantic similarity. For every piece of content (e.g. web page or document) a user views, another model — fine-tuned on Heyday’s own collection of articles and tags — predicts related topics that could be suggested to that user. Additional models classify content by topics a user has already followed and generate summaries for content.

“With this, we can suggest new topics for users to follow and suggest content for them to curate into existing followed topics, so they can automatically fill their own knowledge base,” Rahman said. “The challenge for founders building in the knowledge management and productivity space is that early adopters who are most excited about trying new tools are unlikely to be representative of the larger population of people who still default to Google Docs and Apple notes. We see new products come along that get a ton of initial attention from people who are passionate about productivity, but then they fail to break through to mass adoption. By building a product that optimizes for ease of use over depth and flexibility, founders like us have the opportunity to win the market.” 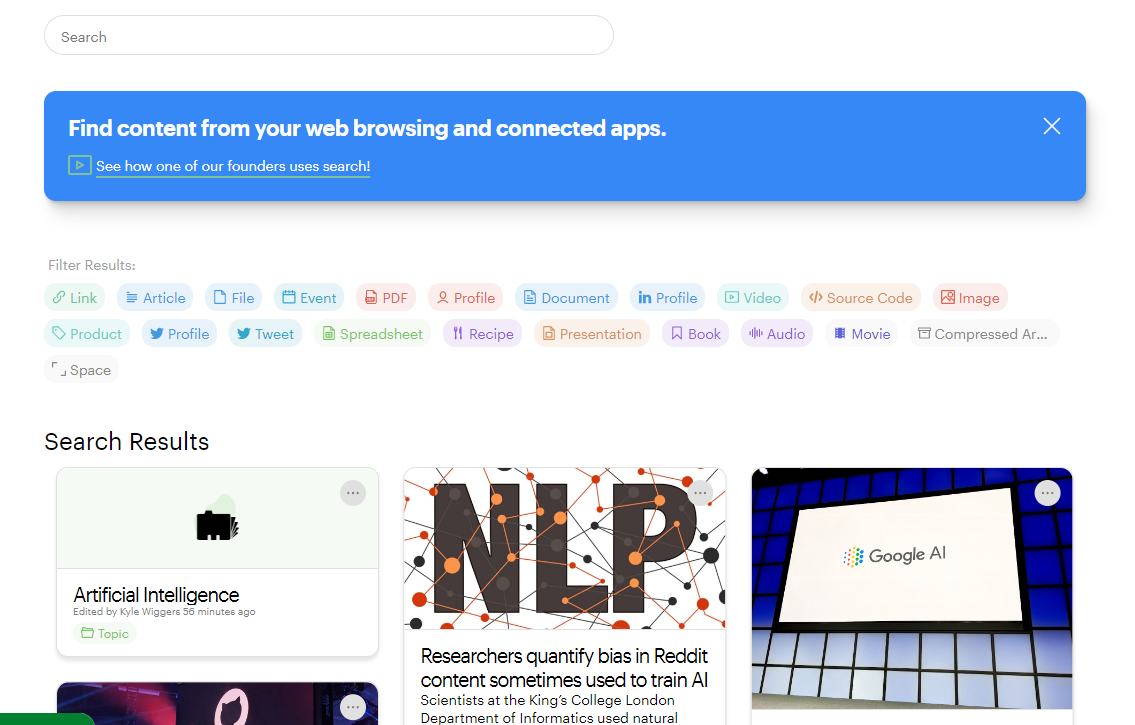 I’ve only been testing Heyday for a brief while, but I can confidently say that it’s been helpful in diving back into forgotten rabbit holes. Within minutes of installing the Chrome extension, Heyday highlighted articles I’d searched last week while researching a feature on “buy now, pay later” apps.

Heyday crunches a lot of personal information. But Rahman says that the platform encrypts all data such that no one but users see their respective timelines. Any data associated with users who opt not to pay for Heyday after the trial period is deleted, as is data belonging to customers who decline to renew their subscriptions. (Heyday is free for the first 14 days and $10 per month after that.)

Rahman says that “people who do a lot of reading and research online” — content marketers, entrepreneurs, investors and the like — are among the initial Heyday adopters. It’s early days, but eventually, Heyday plans to build an experience for teams that’ll pool together content from individual users into a shared knowledge base.

“Heyday competes with tools and other cobbled together systems people use to remember things — like leaving hundreds of browser tabs open, sending content to themselves, and leaving email newsletters unread,” Rahman said. “[We’re] well-positioned to weather potential headwinds.”

While declining to reveal revenue figures or the size of Heyday’s customer base, Rahman said that the closing of the most recent round gives Heyday a runway that’ll last for more than two and a half years. Heyday has four employees based out of its San Francisco, California office; it plans to hire four more by 2023.