Join, a decision-making platform for architecture, engineering and construction, today closed a $16 million Series A round led by SignalFire with participation from Ironspring Ventures, Metaprop, Building Ventures and Standard Investments. The fresh capital, which brings the company’s total raised to $30 million, will be put toward “doubling down” on market expansion and expanding Join’s product, according to CEO Andrew Zukoski.

Join was launched in 2017. Zukoski, Drew Wolpert, Jim Forester, Ye Wang and the rest of the founding team met through Flux Factory, a spinout of Google’s experimental product lab, X (formerly Google X), where they developed technology that tracks and documents building construction decisions. Flux was the first company to spring out of X in 2014, but was mired in controversy when an architect sued both Flux and Google for allegedly stealing his ideas for architecture design software.

Zukoski hopes Join will have a quieter profile. “We envision a world in which teams are powered by trust and buildings are built on confidence,” he told TechCrunch via email. “General contractors have to win work, plan it and then execute it. One in 10 projects is a financial disaster for general contractors. They have good systems for tracking and controlling execution. However, these systems don’t give them any visibility into the earlier phases, which have become more and more critical with the shift to collaborative delivery methods.”

Zukoski positions Join as a replacement for the Excel and other email-based workflows that many construction stakeholders use to make decisions about projects. Most of the risk management for projects happens during the early phases, known as “pre-construction.” But it often takes place across disparate spreadsheets, leading to disjointed communications.

Join takes data from Excel and other estimating tools and provides an ostensibly easier way to assess the impact of pre-construction decisions. For example, with Join, a user can ask “what if” questions and see the cost impact of an option in real time. 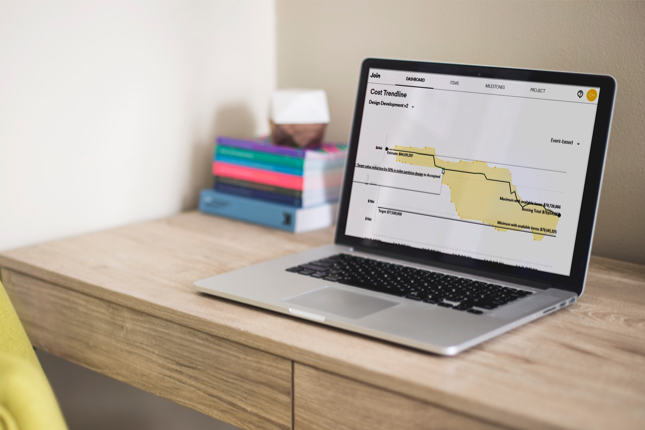 “The major incumbents, like Procore and Autodesk, have built around the way that work was delivered 20 years ago, where the relationships between the owner, the architect and the contractor resembled waterfall software development. Teams would design every detail of a building before getting any feedback on what it would cost. This is a primary cause for many projects being late and over budget,” Zukoski said. “This has changed. Now, 80% of work is delivered through collaborative methods that engage design and construction early, allowing cost to inform design. This is a huge opportunity for construction, but means there is a huge need for collaboration during the pre-construction phase when these stakeholders are assembled.”

Join delivers real-time data, decision history and info via a dashboard where stakeholders can view it and respond to address potential warning signs. The platform includes visualization tools as well as timeline and budget planners, providing insights based on past project performance so that future ones can benefit.

“We’re well positioned both with the pandemic and with the technology slowdown,” Zukoski said, pointing to a 2020 Autodesk survey showing that poor decision making costs the construction industry $89 billion in avoidable rework, or redoing work that wasn’t done correctly the first time. “As a whole, the construction industry is slower to adopt new technology, so there is a lot of room for growth with customers.”

Indeed, technology in the construction sector is generally slow to grow. For example, a recent KPMG Canada survey found that three-quarters of construction companies in Canada rate their digital maturity as “fairly low.”

But Zukoski argues that the pandemic drove construction companies to embrace tech and new ways to work, spurring their interest in technology that makes contractors’ jobs more efficient overall. To wit, Join has around 50 customers that have used the platform for healthcare facilities, research centers, affordable housing and entertainment and sports complexes.

Underlining the demand for construction technology, investor funding in the U.S.-based sector reached a record $2.1 billion in 2021 — more than a 100% increase from a year ago — according to Construction Dive. Just recently, AI-powered construction management platform Buildots landed $60 million in a funding round. Meanwhile, Alice Technologies, a construction design platform, bagged $30 million in fresh capital to expand its platform.

Zukoski says that one of the goals with the cash from the Series A is to expand the size of Join’s team from 52 to 75 by 2023.