Telegram has amassed over 700 million monthly active users and is rolling out a premium tier with additional features as the instant messaging platform pushes to monetize a portion of its large user base. The firm did not disclose how much it is charging for the premium tier, but the monthly subscription appears to be priced in the range of $4.99 to $6.

The premium tier adds a range of additional and improved features to the messaging app, which topped 500 million monthly active users in January 2021. Telegram Premium enables users to send files as large as 4 GB (up from 2 GB) and supports faster downloads, for instance, Telegram said.

The move is Dubai-headquartered firm’s attempt to keep its development “driven primarily by its users, not advertisers,” it said. It’s also the first time an instant messaging app with hundreds of millions of users has rolled out a premium tier. Signal, WhatsApp, Facebook Messenger, Apple’s Messages and Google’s Messages, some of Telegram’s top rivals, don’t offer a premium tier.

Telegram founder and chief executive Pavel Durov said earlier this month the move to launch a premium tier was intended to respond to user demand for additional storage/bandwidth.

“After giving it some thought, we realized that the only way to let our most demanding fans get more while keeping our existing features free is to make those raised limits a paid option,” he said.

Some analysts had earlier hoped that Telegram would be able to monetize the platform through its blockchain token project. But after several delays and regulatory troubles, Telegram said in 2020 that it had abandoned the project and offered to return $1.2 billion it had raised from investors.

In March 2021, Telegram raised over $1 billion from a number of investors including Mubadala and Abu Dhabi Catalyst Partners by selling 5-year pre-IPO convertible bonds.

“Today is an important day in the history of Telegram — marking not only a new milestone but also the beginning of Telegram’s sustainable monetization,” the firm said in a blog post Sunday.

In India, the premium version is priced at $6 for iPhone users. Alex Barredo, a Spain-based technology commentator, reported seeing €5.49 ($5.77) as the monthly cost. A Telegram spokesperson did not respond to a request for comment.

Premium users will also have the ability to convert voice messages into texts, access exclusive stickers and reactions and use animated pictures as their profile photos. They will also be offered a no-ads experience. (In some markets, sponsored messages are shown in large, public one-to-many channels.)

Durov has pledged to keep all current free features in the app free in the future and also continue to build new features for the non-paying audience.

On Sunday, the firm said it is rolling out a feature, called join requests, to enable all users to join a public group without the need for an invite link. Another new feature aimed at free users will make it possible for verified groups and channels to show their badge at the top of the chat. The new update also supports rendering of animations at120 frames per second for new iPads and iPhones.

“This update includes over 100 fixes and optimizations to the mobile and desktop apps — eliminating bugs, improving speed and expanding minor features,” Telegram said. 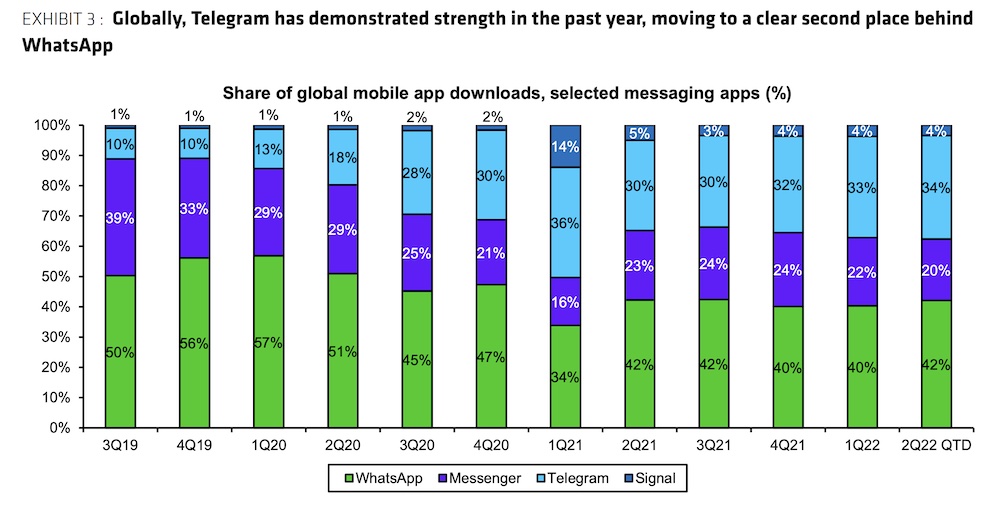 In a note to clients in May this year, analysts at Sanford C. Bernstein reported that Telegram was getting “increasingly competitive” with its features. “While WhatsApp and Messenger still comprise the majority of messaging app downloads in our selected group, Telegram has taken significant share from both apps, especially Messenger,” they wrote.