If you’ve ever spent time writing beat poetry about container ships chugging their way into and out of harbors, “nimble” or “fast” will be unlikely to make it into your finely crafted written words. And if your (admittedly increasingly esoteric) poetic bent is more of an air freight persuasion, it’s likely that “affordable” was not in your lexicon. Boundary Layer is working on a series of electrically propulsed hydrofoiling vessels and wants to rewrite the book of transportation-focused verse, one stanza at a time, with nimble, fast-to-load, container-ship standard high-speed shipping vessels, with the goal of halving the cost of traditional air freight, at comparable speeds.

The company raised $4.8 million from Lower Carbon Capital, Fifty Years and Soma Capital, and already has $90 million in pre-orders from ferry operators for their 220-seat electric passenger vessels. The passenger ships are but a launchpad before the company goes after its real goal: the freight market. I spoke with Boundary Layer’s CEO and founder, Ed Kearney, who told me that these early vessels are a launchpad to enter the $100 billion air freight market with a high-speed hydrogen-powered container ship.

“We applied to Y Combinator and were accepted. We told the partners in the interview that if we were accepted into Y Combinator, we would come to the Bay Area, and we’d build a hydrofoil container ship that carries one container,” says Kearney. The Y Combinator team called bullshit, he tells me. The team rolled up their sleeves and got to work. “We turned up with some hand tools in our luggage, no workshop, nowhere to live, and started building. Ten weeks later, we managed to build this hydrofoil. We spent $150,000 on it, which happened to be exactly the amount of money that YC gives you. We parked out in front of the demo day facility and it made a bit of an impact.”

It’s easy to see how; the company’s prototype ship — and the video it produced to show it off — looks pretty slick:

The challenge with hydrofoiling, of course, is that you need a fair bit of energy to get the ship’s hull out of the water — and that’s harder the heavier the ship gets. The world’s largest cargo ships can transport some 24,000 containers in one go. Needless to say, those behemoths aren’t going to casually lift their hulls out of the water — but that’s also not what the company is competing with.

“The physics [of hydrofoiling] is very similar to that of an aircraft. The amount of the lift-to-drag ratio that you get with modern materials on a hydrofoil wing these days are about the same as what you can get from a traditional airplane. So the amount of power you need to make a vehicle have the same amount of mass takeoff is also kind of comparable. Also the amount of thrust you need scales with speed,” Kearney explains. “An aircraft travels at 500 knots — we travel 40 — but they still need 12 times more power. In a nutshell, the way we solved it was by taking a smaller vessel, you get very weight-conscious, and you need a large amount of power. That means we need big fuel cells and batteries.”

The company’s vision is not to replace conventional ocean freight, the freight rates — that would be madness; the price of ocean freight is incredibly low, which is why around 90% of all goods consumed in the world are shipped this way. The company tells me that the local trucking — which takes the container the last few hundred miles of its journey — can be more expensive than the 6,000-mile ocean journey.

“We will be making container ships, but we’re not competing with container ships. We are replacing air freight. Think of components and other goods they are shipping by air freight. They are already paying very high freight rates of $2-3 per kilogram,” Kearney explains. “Inter Asia is the most exciting market for us, because it’s the biggest market in terms of air freight. Those customers already have very high-value goods that need to move quickly and we’re able to offer them an alternative to air freight that’s half the price and comparable transit times.” 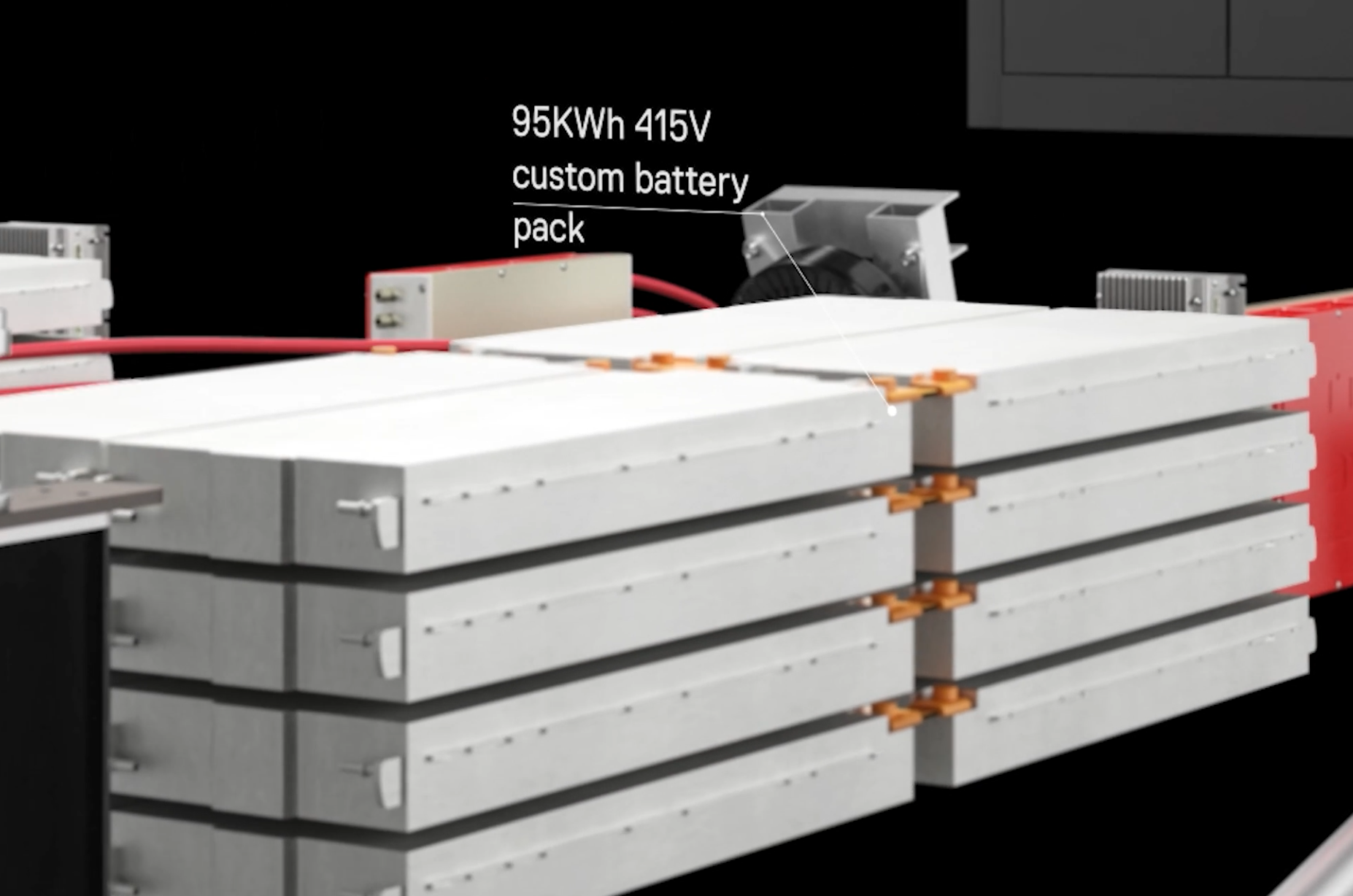 The battery pack on Boundary Layer’s prototype clocks in at 95 KWh and 415 Volts — very similar to what you might find in a high-end performance electric car (the Tesla Model 3 Performance packs an 82 kWh 350 V lithium-ion pack, for example). Image Credits: Boundary Layer

Of course, a plane is going to out-fly a ship cruising at sea every day of the week, but Boundary Layer believes that high speed and the use of standard containers makes it competitive. The crux of the matter is that containerized transportation can make shipping an order of magnitude more efficient. A manufacturer in Taiwan can fill a 20- or 40-foot container with whatever they need to ship, put it on a truck, move it to one of Boundary Layer’s high-speed container ships, then put it on a truck in South Korea and have it delivered to the assembly plant. All of this can happen without unloading and re-loading the container — which can be locked and sealed for the whole journey. When shipping by air, even if the goods are on pallets, the company claims there are significant inefficiencies.

If you really want to nerd out about why containerized commerce is such a benefit, there’s an incredible eight-part podcast series that’ll have you transfixed for a few hours. One for the transportation nerds. Anyway — back to Boundary Layer…

“We’ve got three Fortune 500 companies as launch partners — one is in the electronics space, one in the automotive supply and one is in the electronic equipment space,” claims Kearney, who declined to name the companies for now, but claims those three partners have $26 million worth of letters of intent (LOI), and an additional $60 million in pre-orders for the passenger ferries, spanning the world: “The passenger ferry customers will be announced soon, but they’re all over the world, including the Mediterranean, the US, as well as the Caribbean”

Boundary Layer created a video to show off its passenger ferry:

The company makes a big deal out of its vehicles being zero-emission.

“All our vessels will be zero-emissions, and propulsion ultimately comes from electric motors. The passenger ferry will just have lithium-ion batteries powering the electric system,” says Kearney. “For the container ship, we need to have a range of 1,500 nautical miles. Batteries only really get you to about 100 nautical miles, so for cargo, we are doing liquid hydrogen. That will even get us to 10,000 nautical miles if you wanted to have very large tanks. The electric system between the passenger ferry and the cargo ship will be identical. What differs is where the electrical power comes from.”