Waymo is pulling the human safety driver out of its recently expanded robotaxi operations in downtown Phoenix, Dmitri Dolgov, co-CEO of Waymo, announced on the TechCrunch Sessions: Mobility stage on Wednesday.

“We will be starting fully autonomous, rider-only operations in the downtown Phoenix area that will…be on the fifth generation of our system on the Jaguar I-PACEs,” said Dolgov.

The news comes less than two months after the self-driving unit of Alphabet announced the expansion of its drivered robotaxi service from the East Valley of Phoenix into the city’s downtown area. At the time, Waymo also said it had opened up driverless rides for employees in San Francisco.

The Waymo Driver autonomously navigating through a busy intersection to pick up a rider at the Phoenix Convention Center. Image Credits: Waymo

Employees were also the first to receive autonomous rides in downtown Phoenix with a human safety operator, but last week, Waymo opened that up to its “trusted testers.” Driverless rides in the area will only be available for employees for the time being, but Waymo said it will make that program available to members of the public in the coming weeks.

Waymo has been testing in Phoenix since 2016, and began offering a fully autonomous public ride-hail service there in 2020. This milestone serves to deepen the company’s roots in the city, where it currently has a dominant position in the robotaxi market.

Driverless operations in downtown Phoenix will kick off in the northeast part of the area and gradually ramp up operations into all of Waymo’s trusted tester territory, which covers central Phoenix, including downtown, midtown and south central, according to a Waymo spokesperson. 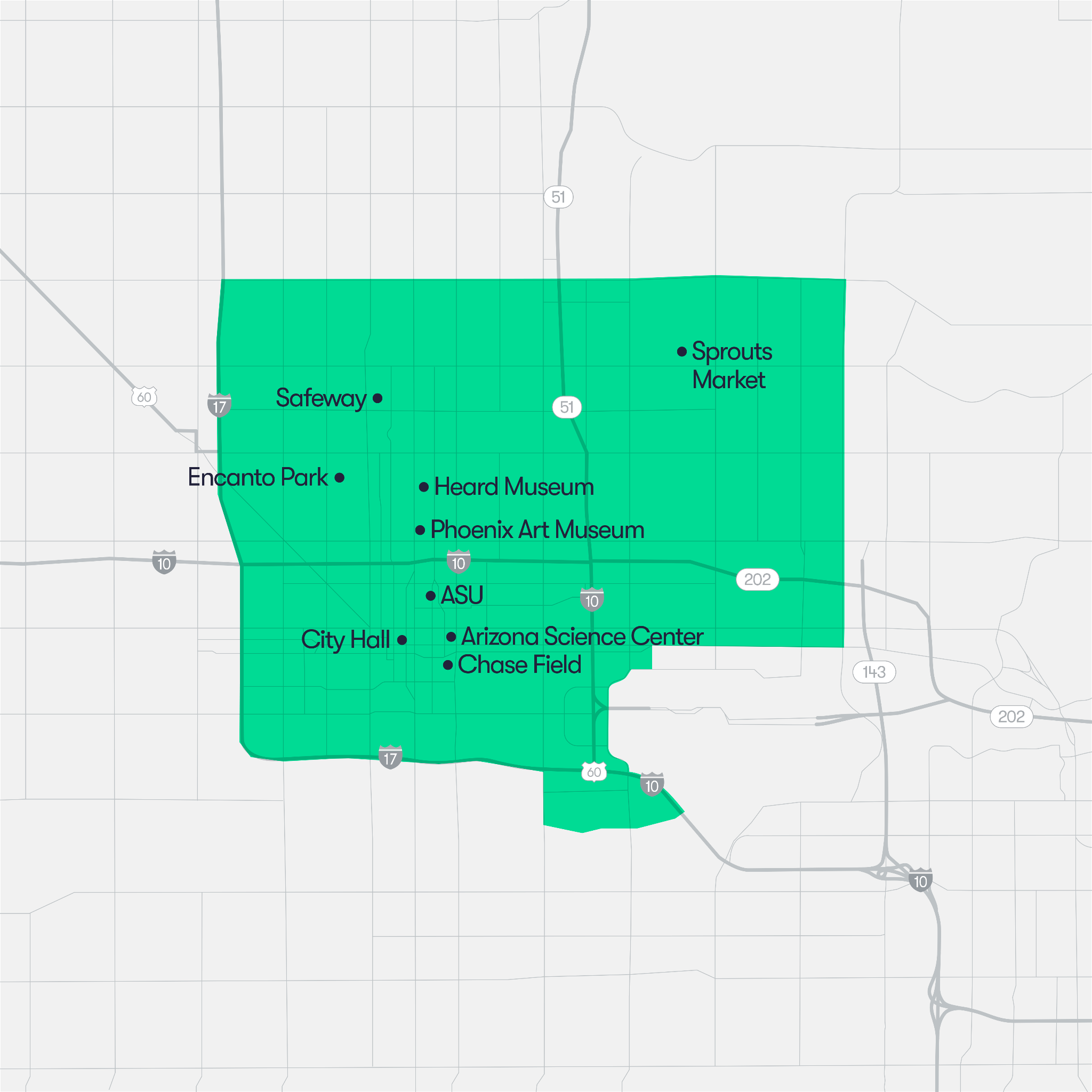 In addition to opening up driverless pilots in downtown Phoenix, Waymo says it’s beginning to drive at Phoenix Sky Harbor International Airport with an autonomous specialist present. Waymo’s fleet of Jaguar I-PACEs will drive autonomously at the airport 24/7, with operations focused on the area around 44th Street PHX Sky Train Station, which is near the pickup and drop-off location for other ride-hail services, according to Waymo.

Again, Waymo employees will be the initial guinea pigs, hailing rides between downtown Phoenix and Sky Harbor, before the company opens the service to members of the public.

“What we learn at Sky Harbor Airport will benefit us in other locations and help accelerate our progress,” wrote Waymo in a blog post. “As we bring the Waymo Driver to more people in more places, we will be able to deploy in every new territory even faster and focus on some inherent challenges specific to each location—like driving in snow in New York City, human-like mannequins in Los Angeles’ Fashion District, or the notorious Pittsburgh left.”

While Waymo wouldn’t share the size of its fleet operating in downtown Phoenix or at the airport, the company did say that it has more than 300 cars in the city.

In terms of further expansion, while Waymo wouldn’t share many details, Dolgov did hint at plans to launch a service in a third city. Aside from Phoenix and San Francisco, Waymo has tested in cities and states like Seattle, Michigan and New York City, said Dolgov.

Dolgov noted that Waymo will follow its playbook, in which the company identifies a market that it is interested in based on its fifth-generation Waymo Driver capabilities, test there for a few months and then, as we’re seeing, be prepared to pull out the safety operator.

“We’ve been investing and moving qualitatively forward on the technical side to that fifth-generation system that is designed to work everywhere,” said Dolgov. “Now we’re exercising that muscle of deploying but doing it on the new system, and we’re moving much faster than we’ve ever been before. You’re seeing that in San Francisco. You’ll see that in downtown Phoenix, and we will exercise the playbook as we go after new markets.”

As Waymo moves forward, Dolgov noted that the company is focused on expanding its latest generation of the Waymo Driver onto more Jaguars, but not onto the Chrysler Pacifica minivans, which are powered by Waymo’s fourth generation Driver and operate in Phoenix’s East Valley where the company runs its public fully autonomous service.

The fifth generation driver is the same system that Waymo is currently using on Class 8 trucks to pilot autonomous freight operations.

Waymo is also working with Geely’s luxury EV brand Zeekr to manufacture a custom-built autonomous vehicle. Dolgov didn’t provide any timelines on that, but he did say that Waymo’s path going forward would be to work with partner OEMs to build the right platforms for its Driver.

Correction: A previous version of this article captioned the GIF above as Waymo’s simulator.