Carvana, a used-car retailer in the United States that raised at least nine figures worth of venture capital while private before going public, announced 2,500 layoffs today. The staffing cuts, detailed in a filing with the U.S. Securities and Exchange Commission, are part of the company’s “previously announced plans to better align staffing and expense levels with sales volumes,” Carvana wrote.

Carvana also said that its “executive team is forgoing their salaries for the remainder of the year to help contribute to the severance pay for departing team members.”

That the company is cutting staff is not a surprise given its recent financial performance; the scale of the layoffs, however, is eye-catching. Let’s talk about how Carvana got to this point.

So much for the afterglow

Carvana is a deeply unprofitable company, losing money in the first quarter even on an EBITDA basis, a heavily-adjusted profit metric.

How did Carvana wind up growing its revenues while shrinking its gross profit at the same time, thus boosting its losses? Here’s how the company explained the matter in its earnings report:

We generally prepare for sales volume 6-12 months in advance, meaning we built capacity in most of our business functions for significantly more volume than we fulfilled in Q1. With our costs relatively fixed in the short-term, the lower retail unit volume led to higher cost of goods sold per unit (e.g., reconditioning and inbound transport costs), leading to lower GPU, and higher SG&A per unit. These effects combined with rapidly rising interest rates and widening credit spreads led to lower EBITDA margin.

Carvana overbuilt for volume it didn’t reach, leading to higher fixed costs and worse profitability. The issue led to the company writing in its Q1 2022 report that it intends to “better align sales with expense levels through a combination of higher sales and expense efficiencies” in the “next several quarters.”

Given that timeline, more staffing cuts could be on deck.

It’s worth mentioning that the company had an entire section in its Q1 report detailing its expansion plans, noting that it had opened one new inspection and reconditioning center, or IRC, in Q4 2021 and three in Q1 2022, adding that it expected open three more this year. (That Carvana is buying another company using external debt is another matter.) In its SEC filing, Carvana said that “[i]n connection with these right-sizing initiatives, over the next several weeks Carvana will be transitioning operations away from its Euclid, OH IRC and a few logistics hubs,” making its April comments feel odd in retrospect.

Still, the company has to make changes. It missed every single one of its long-term financial goals in Q1 2022: 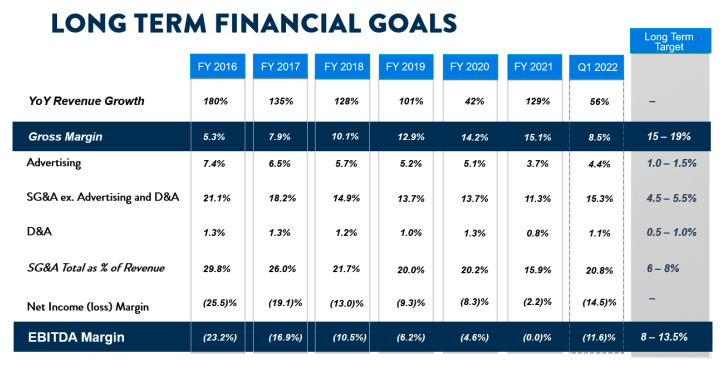 Even more, Carvana’s operations consumed $593 million in cash during the first quarter, a huge sum for a company that reported cash and equivalents of $247 million at the end of Q1 2022.

Carvana’s cuts come as a number of startups also cut staff; companies of all shapes and sizes are reducing staff where they perhaps overhired or expected more demand than materialized.

It’s a tough time for business, in a sense, with a yet-tight labor market coupled with above-average inflation and uneven market performance. This won’t be the last set of layoffs that we report on in the second quarter.