Premiering on ESPN+, Michelob Ultra, in collaboration with tech and production company Unit 9, presents “McEnroe vs. McEnroe,” the world’s first tennis match to feature a real person versus a virtual player — both being a version of the entertaining, confrontational tennis player, John McEnroe. In the match, the real McEnroe will face off against his ultimate opponent—his younger self. In this case, a virtual player powered by A.I.

While the original premiere date was set for Saturday, May 7, this has been retracted. The new release date is yet to be determined.

The 45-minute film will showcase how the match was created using a combination of artificial intelligence (AI) and machine learning, plus five virtual avatars of John McEnroe from pivotal points of his career. Machine learning is a subcategory of AI that allows a machine to automatically learn from past data without the need for manual programming or correcting.

The team at Unit 9 spent a day with John in order to bring the vision to life via full-body scanning, motion capture, and Unreal Engine MetaHuman technology (a cloud-based app that creates photorealistic digital humans). The avatar game system will be projected on a hologram particle screen and will be a simulation of gameplay with a system of ball launchers and ball return robots.

When McEnroe sends the ball over the net, the avatar responds to the direction of the real ball. As the avatar swings, a new ball is fired from the ball cannon and then flies through a smokescreen at a precise point in space to make it appear from the avatar’s racket position. From what is shown in the trailer, the hologram particle screen makes the virtual John McEnroe look blurry and distorted. So we will have to see how this actually looks on the big screen when the film airs.

Unit 9’s team analyzed hours of footage from John’s matches throughout his entire career and recorded hundreds of shots, strokes, and movements. In total, they recorded 308 shots with over 259 loops and blends to really capture his footwork and well-known shot-making and volleying skills.

The best part about this is the team recorded numerous key phrases and statements so McEnroe could talk smack to his virtual self (and maybe even smash a couple of rackets). 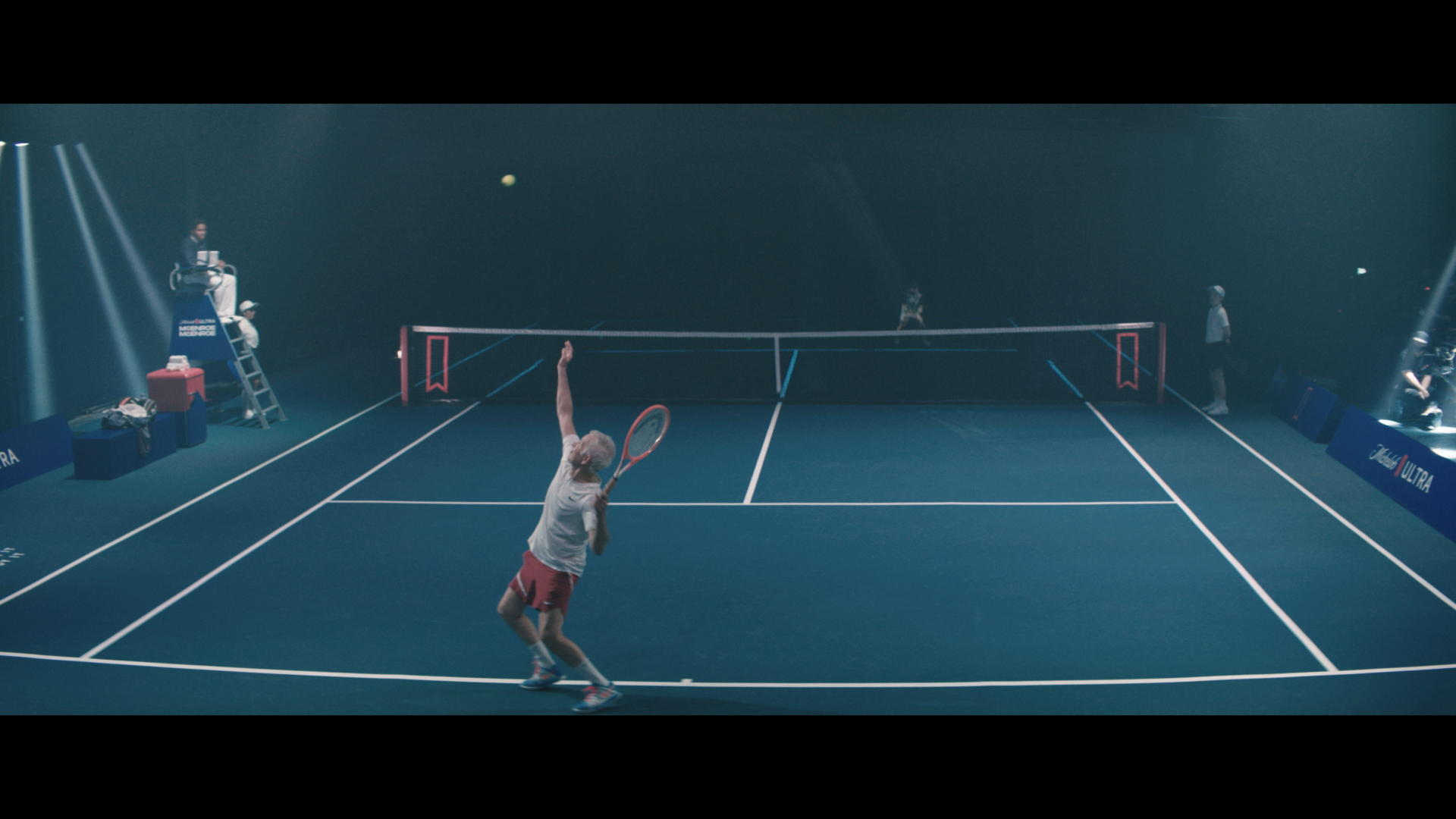 Michelob Ultra also enlisted John’s younger brother Patrick, who will emcee the match and provide real-time insights into John as a person over the years. Sports commentator Ashley Brewer and former professional tennis player James Blake will call the action and give fans a behind-the-scenes look at this one-of-a-kind match.

“McEnroe vs. McEnroe” is the latest spectacle in the Michelob brand’s campaign “Joy is the Ultimate Trophy.” The virtual match is a significant shift in the company’s strategy and follows its 2020 virtual fan experience titled “Michelob Ultra Courtside,” a partnership with the NBA and Microsoft that led to a 32% increase in sales.

In 1979, McEnroe won his first career Grand Slam men’s singles title. While he was at the top of his game in 1981, he remained a controversial player, swearing at referees and yelling at umpires. Despite this, he was the first male player since the 1920s to win three consecutive U.S. Open singles titles, inching closer to becoming No. 1 in the sport.

The tennis player would lose in the 1982 Wimbledon final and had an early exit during the 1983 U.S. Open. The next year, he would be suspended for three weeks because his behavior was so bad and exceeded a $7,500 limit on fines. He was also disqualified from the Wembley Indoor tournament as a result of his racquet slamming and harsh words. While 1984 had its dark areas, McEnroe did have his best season yet and had an 82-3 match record, the highest single-season rate of the Open Era. His last year on tour was in 1992.

John McEnroe is now 63 years old and will be the first athlete to participate in this type of tech-based competition, according to Michelob. The company approached John with this opportunity because they knew that he was a fiery, intense competitor and would be up for this sort of challenge.

“Who wouldn’t want an opportunity to literally be able to look back at where you started and celebrate how much you’ve grown and learned along the way?” said McEnroe. “I’ve had highs and lows just like everybody else, and what I’ve learned over time is to appreciate the journey. No matter what happens, you have to find time to savor the experience and remember it’s only worth it if you enjoy it.”

Along with the virtual tennis match, the film will also allow John to reflect on his career and share stories and lessons he’s learned over the years.

“This is exactly why John McEnroe makes so much sense for this project. Aside from the fact that he’s, of course, a Hall of Famer [and] tennis legend, he is evolved as a human … His outlook on life beautifully aligns with what we stand for,” Marques said. “So it is indeed a journey looking back at those moments when he was a very intense player on the court to where he sits today.”

The idea of such a well-known and hot-tempered tennis player playing an AR version of himself will definitely turn some heads, and he could be a risky partner for the brewing company. For instance, McEnroe once said Serena Williams (who has partnered with the brand) would be ranked number 700 if she played on the men’s circuit. 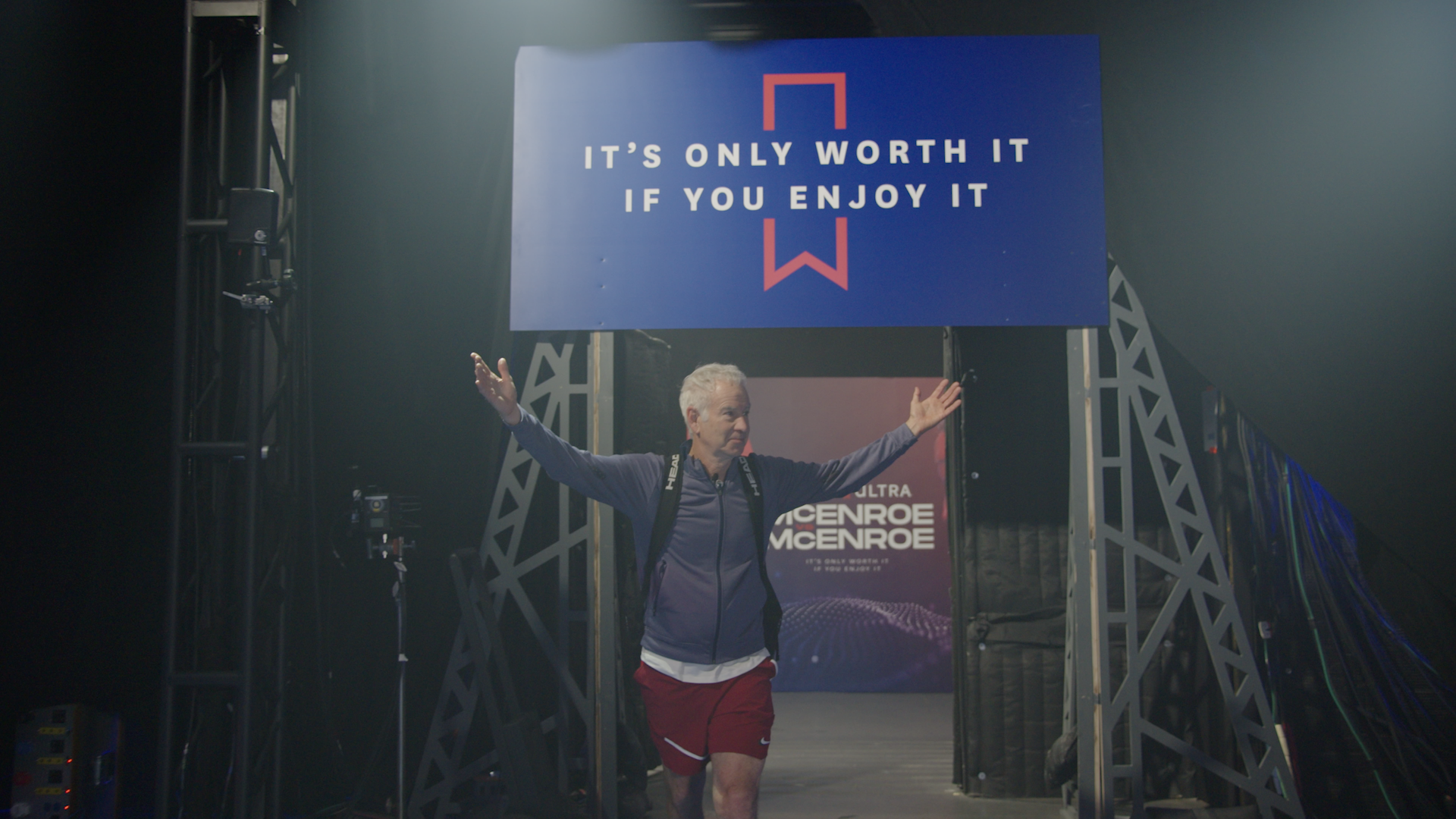 The extreme contrast between Michelob Ultra’s happy-go-lucky slogan “It’s Only Worth It If You Enjoy It” and John’s combative attitude will be an interesting pairing, to say the least. The result will certainly be unique as “one of the most colorful personalities in sports learned to find joy later in his career,” the company said. The film will allow audiences to witness how a competitive player has evolved over time.

“At the end of the day, this is a message about joy and fun. Reminding people to make the most out of every single day and enjoy the ride,” added Marques.