Graphite’s founders came from Facebook, Airbnb and Square, three companies where they had access to sophisticated code review tools. When they started Graphite, originally as a mobile development tool company, they missed those tools they had at the bigger companies and began to build one to use internally.

They soon realized that the tool they built for themselves gave developers access to a set of capabilities previously only available to people working at larger, more sophisticated companies. Eventually, they decided to focus their startup exclusively on that tool, company co-founder and CEO Merrill Lutsky explained.

They began sharing the tool they had been working on, and were pleasantly surprised by the reaction. “The response to what became Graphite was so enthusiastic and compelling that we started to think that maybe we should work on this instead.”

Before they would walk away from their original idea, however, they set some parameters. If they could get 20 engineers to download Graphite before the end of August, they would complete the transition. They ended up with 40 enthusiastic users, who were giving them feedback, and last September, they decided to go all in on the code review product. 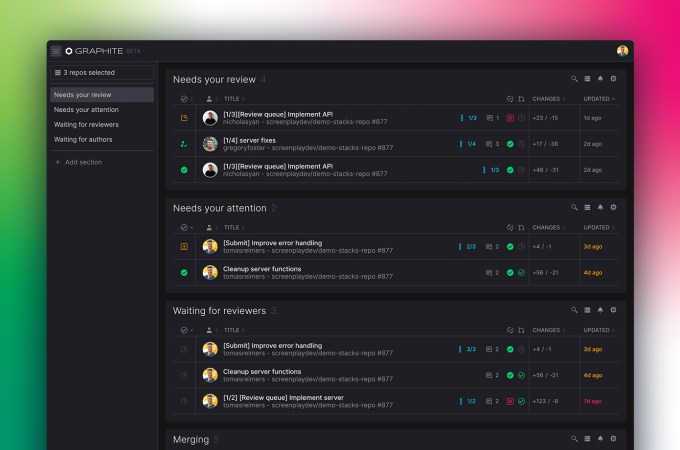 What they created is an open source command line interface and dashboard for streamlining code review. Normally, code review is a linear process. You build a piece of the program, you commit it and you wait for the review. They wanted to change that to make it concurrent, letting you continue with your work, even while that original piece is being reviewed, a process that is much more efficient.

“The idea with Graphite is that I make a change, and then while I look for someone to review it, I just continue to make changes on top of that, creating this queue of things to do,” company co-founder Tomas Reimers explained.

They are a small team today, with six people including the three founders, but hope to get to 15-20 by the end of the year. Lutsky says that he spends a good deal of his time these days working to hire engineers to join the company.

As they shift to working with hiring agencies to bring in candidates they are focusing on bringing in a set of diverse candidates at the start of the process. “As we start to hire more rapidly we’re actually talking to recruiting agencies about working with them and we’re instructing them to make sure that they’re reaching out to candidates from different backgrounds,” he said.

The new approach has resonated with developers and today they’ve grown to more than 2,500 users participating in the company’s Slack community, so it seems they made the right decision. Lutsky says that investors who had given seed money for the idea, including lead investor Hunter Walk at Homebrew, were supportive of the change in direction.

In addition, the company announced today that it has raised a $20 million Series A led by Andreessen Horowitz with Peter Levine taking point on the investment.