The Indian conglomerate Tata Group, a $103 billion company whose business spans multiple industries from salt and software to telecom and steel, is ready to embrace consumer technology. The 154-year-old giant has been working – and internally testing – its audacious plan to offer a range of services from e-commerce and grocery to hotel stays in one app to take on the likes of Walmart-owned Flipkart, Amazon and Mukesh Ambani’s Jio Platforms. The culmination of years of effort, the “super app” Tata Neu rolled out to the public on Thursday.

Tata Neu packs nearly a dozen properties that are either owned by Tata Group or in which it has a significant stake. The services include online grocer BigBasket, electronics store Croma, pharmacy service 1mg, luxury brand Cliq, streaming app Tata Play, as well as ticketing with AirAsia and food and beverages with the coffee chain Starbucks. The app also debuts Tata Pay, the giant’s UPI-enabled payments service that also offers loans and insurance.

Tata has been working on the app for at least three years, but it has been eyeing a bigger play in e-commerce and startup investments for at least six. News outlet The Information reported earlier discussions between Tata and Alibaba that came to an unceremonious end after the surprising departure of Cyrus Mistry, then chairman of Tata Group.

Inside the firm, many executives were still not on the same page as recently as January on how Tata Group plans to position the app, according to two people familiar with the matter. TechCrunch got early access to a February build of the app, which was plagued with bugs and strange design lapses at the time. The new version of the app – 2.0 – sees a significant improvement, according to tests on Thursday. 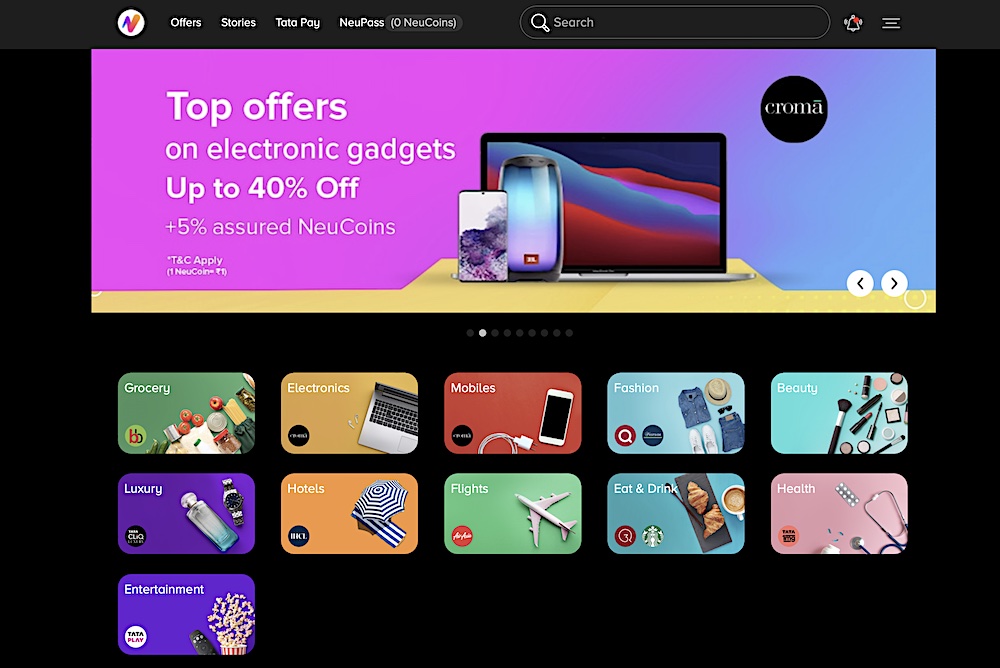 As part of the rollout, Tata Group is also revamping Tata Digital website and making it a web app for Tata Neu.

Tata Neu marks a significant step in the group’s ambition to take on the growing universe of digital services from the likes of Google, Facebook, Amazon and Walmart to local billionaire Mukesh Ambani’s empire. At stake is India’s e-retail market, which is estimated to be worth nearly $150 billion in the next four years.

“The Tata Group is focussed on transforming businesses for the digital world, and in the consumer context, bringing them together into a unified platform that offers an omnichannel experience,” N. Chandrasekaran (pictured above), the chairman of Tata Group, said in a statement.

To incentivize customers, Tata is offering them “NeuCoins” as a reward, where one NeuCoin is equivalent to one Indian rupee. The firm plans to eventually phase out different loyalty offerings by BigBasket, 1mg and other services and use NeuCoins universally across all its services, a person familiar with the matter said.

The rewards are one of the major focuses for Tata Group as it attempts to build a “connective layer” for its services that operate in a wide range of categories. If successful, the giant is positioned to conjure up the largest loyalty program in the country. On top of the rewards, the firm will also offer cash back and big discounts on items across all of its properties on the app and provide its members with free deliveries, built-in credit lines and early access to products, it said.

“The journey of Tata Neu has begun with a cumulative consumer base of 120 million users, 2,500 offline stores, along with an 80 million app footprint across our digital assets. We have over a dozen category-leading consumer brands ranging from electronics, fashion, travel, hospitality, groceries, pharmacy and financial services. We believe that with Tata Neu, we will create a highly differentiated consumer platform,” Pratik Pal, chief executive of Tata Digital, said in a statement.