Ascend.io, a company developing data automation products for enterprise customers, has raised $31 million in a Series B round led by Tiger Global with participation from Shasta Ventures and existing investor Accel, it announced today. CEO Sean Knapp says that the new capital — which brings Ascend’s total to $50 million — will be used to expand the startup’s engineering, sales and marketing teams while extending Ascend’s platform to support greater automation.

There’s no denying that the pandemic bolstered the adoption of AI and analytics technologies. The rapid changes brought on by the health crises forced businesses to adapt practically overnight, accelerating the rollout of new products. According to a 2021 survey from ManageEngine — the IT division of Zoho — 80% of U.S.-based businesses said they accelerated their AI implementation over the past two years, while 20% said they’d boosted their usage of business analytics compared with the global average.

Of course, the benefits haven’t been evenly distributed. Small- and medium-sized businesses remain the odd ones out, with some data showing that the vast majority haven’t adopted data analytics of any kind. The reasons are myriad, but one major factor is the challenge in managing, transforming and moving the vast amounts of data required for AI and analytics. As per a 2021 report from Fivetran and Wakefield Research, 85% of data leaders believe that flawed data management can lead to poor decision-making and lost revenue. A screenshot of Ascend.io’s platform.

That’s where Knapp believes Ascend can make a difference. The company’s platform is designed to give data teams a unified platform to automate the orchestration of data engineering and analytics workloads, he says, ideally reducing the need for manual configuration.

“[I] previously cofounded Ooyala and served as their CTO for eight years … From that experience, it was clear that every company was rapidly becoming a data company, and that there was a tremendous shortage of talent available to assist companies on their journey,” Knapp told TechCrunch in an email interview. “There was an abundance of technology available to store, process and visualize large volumes of data, but the bottleneck was no longer the ability to scale the processing of data. Rather, it was the ability to scale the productivity of the people who work with data. Data engineers had access to tremendous low-level technologies, but there was little to no technology available to support them in the face of the increasingly overwhelming demand. Small teams of data engineers were supporting far larger data science and analytics teams and quickly falling behind.”

So Knapp — who was also a part of the team responsible for iGoogle, Google’s since-deprecated personalized homepage — surveyed data engineers to identify the common problems their organizations face. After recruiting a brain trust to iterate on designs, he attracted the initial crop of angel investors and venture capitalists to launch Ascend out of stealth in 2019.

“This is an exciting time for data engineering. The landscape is dynamic and the rate of change is accelerating — catalyzed by new cloud-based technologies … The challenge, however, is not how to innovate once but continue innovating, as last year’s innovation is this year’s table stakes. Many companies find that early innovation comes at a significant cost to productivity, and the ongoing maintenance of earlier architectures dramatically strains team bandwidth. This is why advanced automation has emerged as such a critical need in 2022, as leaders look to ensure data teams have the capacity to stay ahead of the curve.”

Toward that end, Ascend provides a framework for automated data ingestion that supports no-, low- and high-code connectors to databases, APIs, data warehouses, data lakes and more. (A data lake is a centralized repository for structured and unstructured data, while a data warehouse is a system for business intelligence activities — particularly analytics.) With this framework and other tools, including continuous data integrity monitoring and delivery, Knapp says that a brand could build out a customer data platform to normalize customer data from multiple sources, for example, or create a pipeline to bring data from online ecommerce sales into a business intelligence platform like Looker. 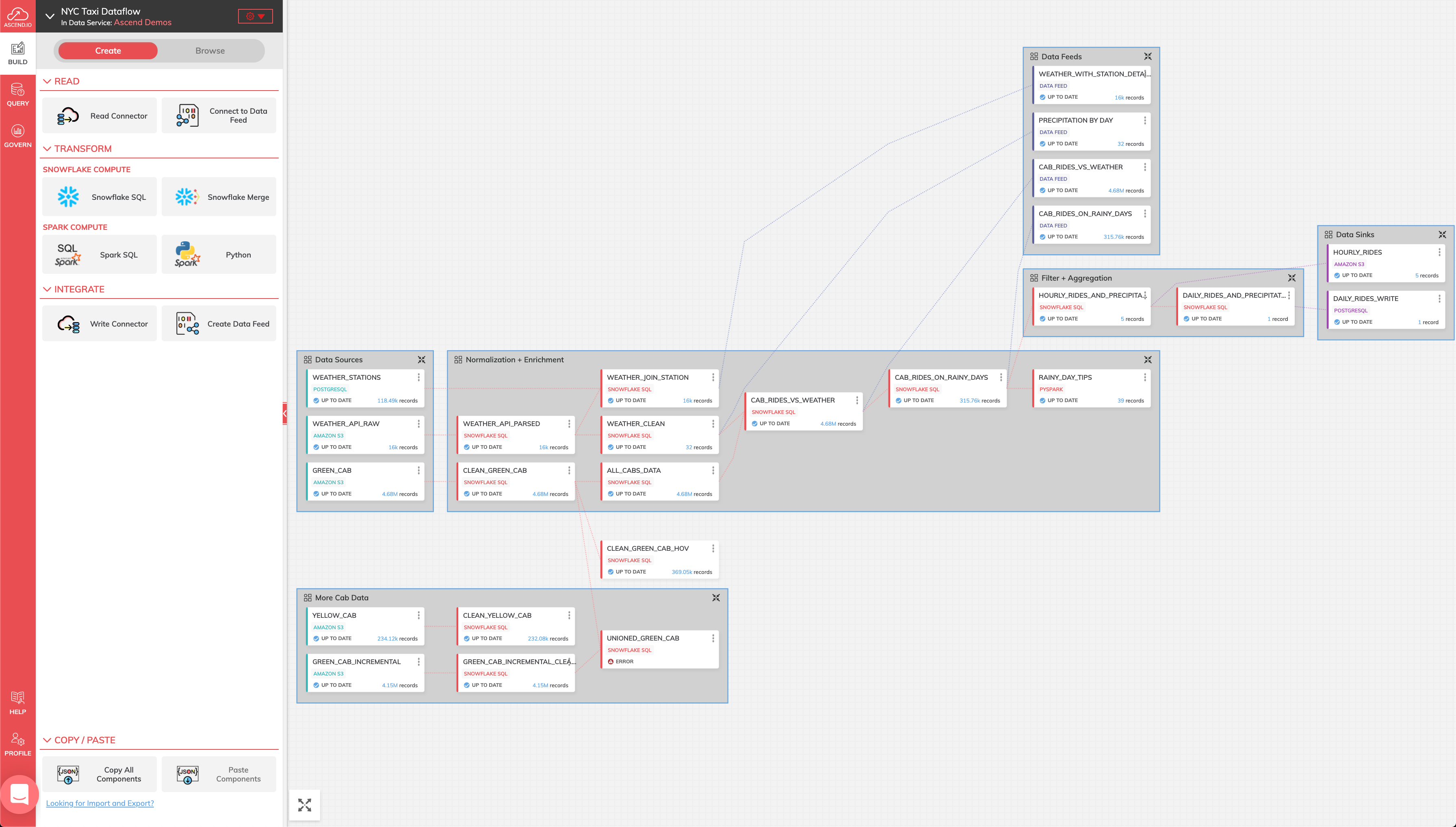 By the end of the year, the goal is to introduce new features that automate data workloads across clouds, data lakes, data warehouses and more “with unified metadata, lineage, [and] observability,” Knapp says (in admittedly vague terms). In the nearer term, Ascend plans to expand beyond its support for analytics platforms Spark, Snowflake and Google BigQuery to include AWS Redshift, AWS Glue and Microsoft Synapse and add “full multi-cloud data mesh automation.” (Here, a “data mesh” refers to an architecture and operating model where data is treated as a product and managed by domain-specific teams.)

AWS Glue Serverless and AWS Redshift Serverless integration is available in preview as of today.

“Increasingly, organizations are collecting, storing, processing and sharing data across more than one system. Trying to coordinate data movement and processing across these systems reliably often results in ‘split brain’ systems that threaten data integrity and undermine the confidence of data systems,” Knapp said. “The pandemic has accelerated adoption of the Ascend platform. Companies relied even more on data to succeed and keep the business moving during the pandemic, and increasingly adopted automation as a way of helping their already overloaded teams achieve more and boost productivity.”

Underlining the trends, Knapp claims that Ascend, which currently has 23 employees (ramping to 56 by year’s end), notched a 600% climb in annual recurring revenue over the past 12 months. Despite competition from startups like Matillion and Astronomer, Ascend’s user count expanded across customers including News Corp., Afresh and Harry’s as the platform began automating more than 10 million data processing jobs each month, Knapp says.

Issac Roth, managing director at Shasta Ventures, who participated in Ascend’s Series B round, told TechCrunch via email: “Backing Ascend is an exciting move for us. We are bullish on the data ecosystem as a whole and it is increasingly clear that Ascend’s innovative approach to automation addresses the rapidly growing and presently unmet needs of the market. Their growth numbers and customer satisfaction are inspiring, and we are excited to partner with them on this journey.”