Like most smartphone users in India, I use WhatsApp a lot. But I have never sent anyone a voice message — ever. Turns out, others do.

WhatsApp said on Wednesday that users on its gigantic messaging app send an average of 7 billion voice messages every day. Communication by the means of voice notes — that like their text counterparts, are protected by end-to-end encryption — are popular because they allow people to “have more expressive conversations,” the Meta-owned messaging app said.

“Showing emotion or excitement through voice is more natural than text,” said the app operator, whose service is used by over 2 billion users to send more than 100 billion messages every day (at last count, over two years ago).

The growing adoption of voice messages — a remarkable and seemingly unparalleled feat — doesn’t necessarily come as a surprise, however. In many emerging markets, for instance, we have seen a segment of the new smartphone users show an inclination toward preferring voice over typing. (WhatsApp did not offer insights into the usage of voice messages across different nations today.)

To mark the milestone, WhatsApp is adding a host of new features and refinements to its voice notes functionality. These include the ability to pause a voice note recording and then getting back to it later, as well as the option to listen to recordings at up to 2x speeds.

The complete changelog is as follows: 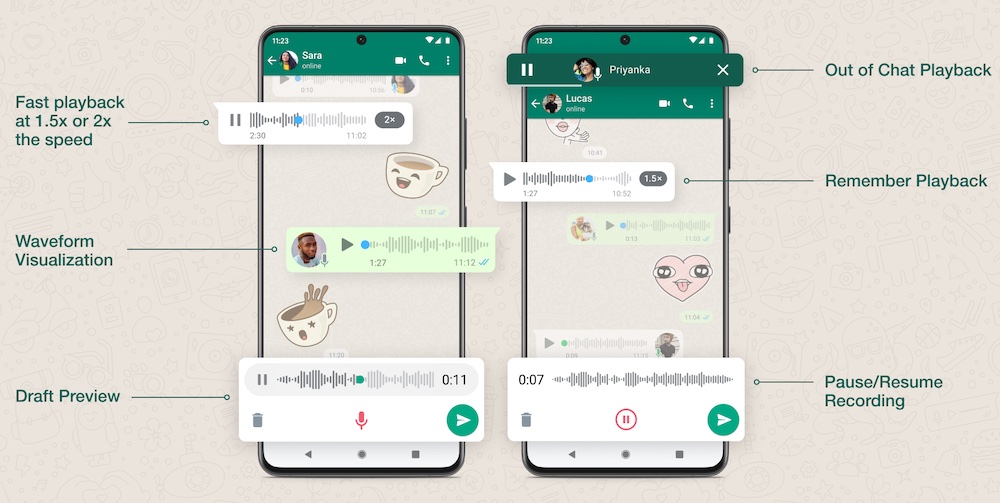