ShopThing, a live shopping marketplace focused on luxury brands, has raised $10 million in Series A funding led by Origin Ventures, with participation from Pritzker Group and Interplay. The Toronto-based company aims to redesign the way people shop and sell through live video commerce via its iOS app.

Founded in 2018, ShopThing currently has 500,000 users across North America. The company’s app allows its network of shoppers and influencers to walk into stores and select products, livestream them to audiences and then purchase an item on a customer’s behalf. On the consumer side, customers can browse the app to see the live deals that shoppers have found. ShopThing notes that sale items only live for 24 hours.

Once a customer makes a purchase, ShopThing fulfills the order. Checkout is completed through the ShopThing app and products are shipped to customers in 1-3 weeks via Canada Post or USPS. ShopThing charges a 20% fee to account for the shopping service, along with the purchase and shipment processes.

ShopThing was created by Maggie Adhami-Boynton, who previously worked at mobile app agency Plastic Mobile, which is behind several popular apps in Canada such as Pizza Pizza, Shoppers Drug Mart, RBC Bank and more.

Adhami-Boynton told TechCrunch in an interview that she got the idea for ShopThing after coming across a New York-based personal shopper on Instagram who would go into stores while livestreaming and find items for her followers to purchase. After doing some research, Adhami-Boynton found that the concept of live shopping is popular in Asia and decided that she wanted to bring that same addictive experience to North America. Live shopping is becoming increasingly more popular in Asia and particularly in China, where e-commerce company Alibaba has launched a service called Taoboa that links livestreams with e-commerce stores to allow viewers to watch and shop at the same time. 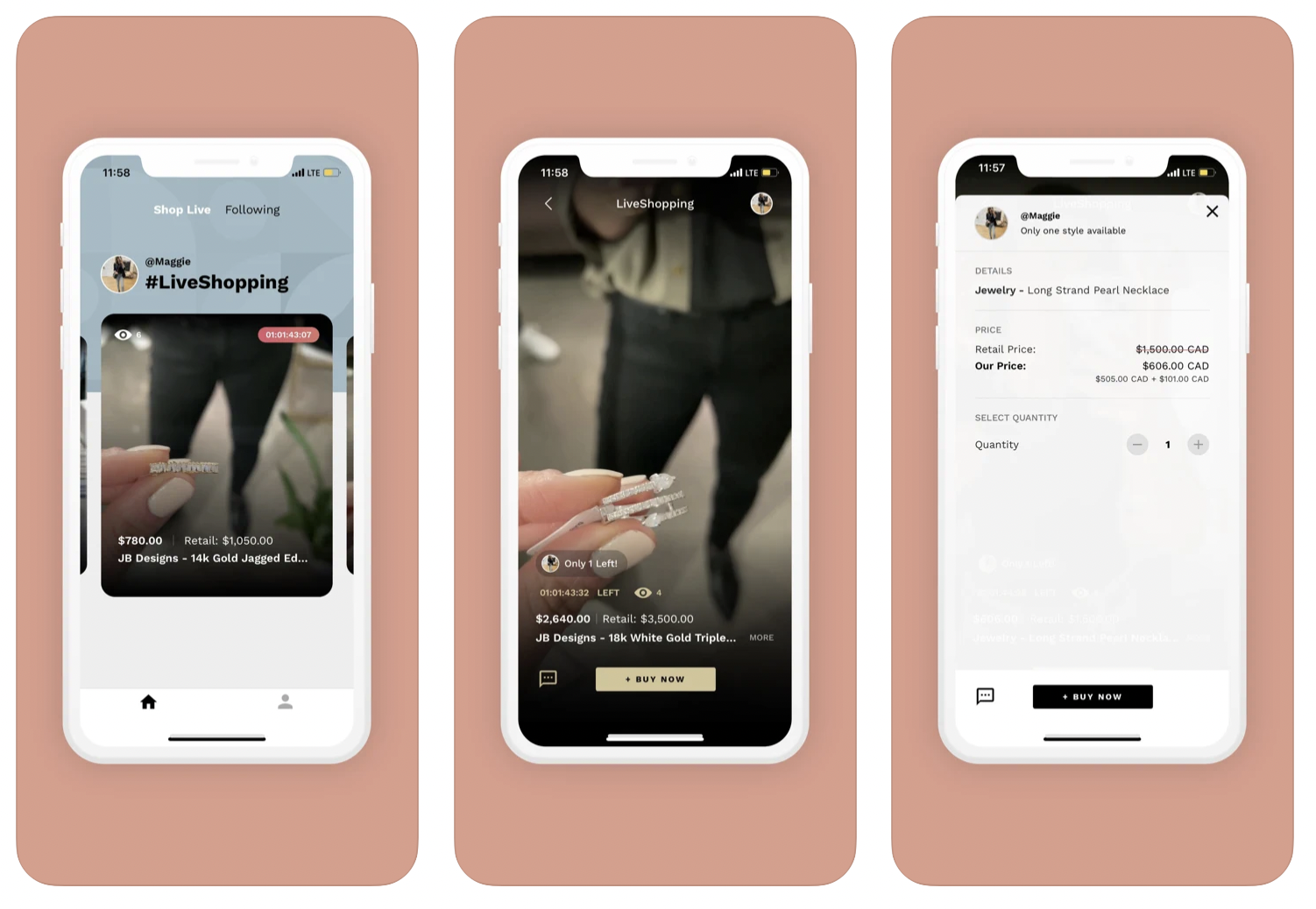 “Our target audience is a busy female aged somewhere between 25 and 45 who is looking for the convenience of not having to shop on her own but loves purchasing online. So she looks to our influencers to create a look for her, answer questions and allow her to make a purchase,” Adhami-Boynton said. “When our shoppers are live, they’re available to answer any questions about things like sizes. It’s a highly curated shopping experience.”

ShopThing currently has more than 100 shoppers and influencers on its platform across North America who go into stores and begin live streams to showcase items that are available for purchase. Shoppers can select an item that they like and explain why they recommend them and then provide information about pricing and quantity. Adhami-Boynton explained that ShopThing is designed to allow Shoppers to enter any store and create a live shopping experience, but that it has partnerships with Stuart Weitzman, Nordstrom, Ted Baker and more. These companies give shoppers on ShopThing exclusive access to discounts and inventory.

The company currently has shoppers in Toronto, Calgary, Montreal, Vancouver, New York City, Miami, Los Angeles and Texas. ShopThing currently ships across Canada and the United States and plans to go international over the next 12 months.

In terms of the new funding, Adhami-Boynton says ShopThing will put the investment toward adding more shoppers to its platform, expanding to more cities and creating a membership program.

“We’re currently in about seven or eight markets and we want to be in 12 to 15 markets by the end of the year and increase our shopper team by about five times,” she said. “In terms of the future, we’re going to launch a membership program that will give our customers exclusive access to benefits and perks.”

Adhami-Boynton said the membership will have a monthly fee and that the company is looking to launch the program in the second quarter of the year.