Astronomer has grown quite a lot since we briefly profiled the company back in 2017.

At that time, the scrappy data analytics company had scooped up $3.5 million in funding to develop its tool for what happens after you’ve collected a bunch of data, namely assembling and organizing it so the data can be analyzed.

The company began developing its modern data orchestration tools, powered by Apache Airflow, an open source platform for data engineering pipelines, that enables users to build, run and observe pipelines-as-code, and started driving that project in 2018.

For those not sure what data orchestration is, Astronomer CEO Joe Otto explained that it is like the connective tissue of a muscle: as more and more data services are being launched, there has to be something connecting it all, and data orchestration is the control plane.

Today, Airflow is used across hundreds of thousands of data teams and 8 million monthly downloads, up from 180,000 in 2018. Astronomer now represents 16 of the top 25 all-time contributors to Airflow. 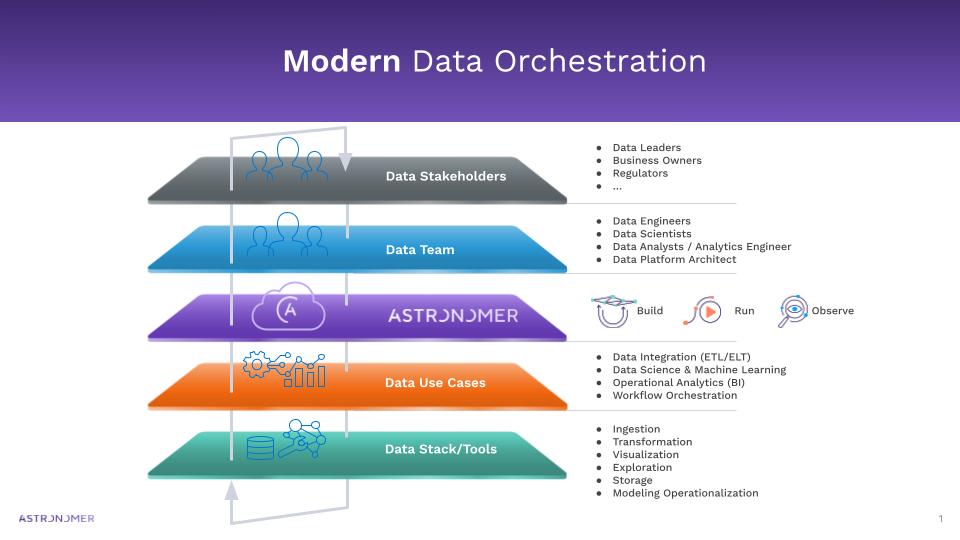 And, the company is not so scrappy anymore. Astronomer has grown its employee headcount 10 times in the past two years to more than 250 global employees, and now has hubs in Cincinnati, New York, San Francisco and San Jose.

Otto didn’t go into specifics about other growth metrics, but did say that the company was just getting started and that he expects 2022 to be the year that Astronomer grows its base considerably.

“For the last couple of years, we focused on Airflow and working with the people who created it,” he added. “Now we are working with them to take Airflow to the next level. We’ve learned how companies are using it, and we are getting ready to launch a product and start scaling field teams, so there is a big opportunity out there.”

The closing of $213 million in Series C funding is giving what Otto called “enough of a cash cushion” for Astronomer to advance some of its strategic plans.

One of those included the acquisition of Datakin, the data operations tool from the founders of the OpenLineage and Marquez open source projects.

In discussing Datakin joining Astronomer, Otto said Datakin was building a data lineage product and was deep in the open source community, too. In addition to having that in common, he noted that as an orchestrator building and managing pipelines, if you don’t have access to the data, then the lineage doesn’t understand the data end-to-end.

“The combination of us two would be the next development for the modern data platform,” he added. “We thought, ‘Why not jointly make the decision to be together?’”

In addition to the acquisition, the company intends to use the new capital to grow its engineering and customer success teams, technology development and scale its go-to-market operations.

“As the modern data stack has arrived at scale, we now need an orchestration experience to support today’s sophisticated, high-velocity data pipelines. Apache Airflow, driven by the Astronomer team, has become the generational platform for modern orchestration,” said George Mathew, managing director at Insight Partners, in a written statement.

Echoing Mathew’s statement, Otto said that Airflow’s large and broad footprint makes it easy for Astronomer to focus on picking it up and taking it to the next level, which is a natural extension to what the company has already been doing.

Otto believes that orchestration is going to be the core of all distributed data services, especially with Airflow being the “de facto tool for data engineers.”

“You can measure us on the basis of building around Airflow and where we can add more value, and we are excited with what we are anticipating,” he added.