Less than seven months after closing on a $57 million Series B, fast-growing fintech Jeeves has raised $180 million in a Series C round that values the company at $2.1 billion.

Financial technology companies raising multiple rounds in a short period of time has become more the norm than an exception as of late. Still, the velocity of Jeeves’ growth and increase in valuation is impressive.

When it raised in September, Jeeves — which describes itself as “an all-in-one corporate card and expense management platform for global startups” — was valued at $500 million. This means it has quadrupled in value in just over six months. It’s also notable that Jeeves only publicly launched in March of 2021, and officially emerged from stealth last June with $31 million in equity financing and $100 million in debt. In the summer of 2020, Jeeves was a participant in Y Combinator’s summer cohort.

Its success is yet another example of how competitive — and lucrative — the corporate card and expense management category has become. For example, Jeeves says that since its Series B was announced in September, it has seen its revenue climb by 900% and doubled its client base to more than 3,000 companies. It also has reached about $1.3 billion in annualized gross transaction volume (GTV) with the expectation of reaching $4 billion by year’s end.

“When I made the rough Series C deck in December, I realized we had more than doubled revenue compared to the entire month of November,” said Jeeves CEO and founder Dileep Thazhmon. “Then in the first two months of 2022, we brought in more revenue than the whole of 2021.”

“We ended up with five term sheets, which was a validation during a time when we’re seeing more due diligence than we had previously and a more challenging fundraising environment,” Thazhmon told TechCrunch. “The market looked very different in January and February than it did in December.”

So just what does Jeeves do exactly? The company says it provides the underwriting, credit in local currency and the payment rails “for any business spend across countries and currencies.” It currently has customers across 24 countries in North America, Latin America, the U.K. and Europe that are a combination of high-growth startups, e-commerce companies and SMEs, including Bitso, Kavak and Belvo, among others.

Jeeves was founded in 2020 under the premise that startups have traditionally had to rely on financial infrastructure that is local and country-specific. For example, a company with employees in Mexico and Colombia would require multiple vendors to cover its finance function in each country — a corporate card in Mexico and one in Colombia and another vendor for cross-border payments.

The startup claims that by using its proprietary banking-as-a-service infrastructure, any company can spin up their finance function “in minutes” and get access to 30 days of credit on a corporate card (with 4% cash back), non card payment rails, as well as cross-border payments. Customers can also pay back in multiple currencies, reducing FX (foreign transaction) fees.

For example, a growing business can use a Jeeves card in Barcelona and pay it back in euros and use the same card in Mexico and pay it back in pesos, reducing any FX fees and providing instant spend reconciliation across currencies.

Thazhmon believes that the “biggest thing” the company is building out is its own global BaaS layer, which sits across different banking entities in each country, and onto which the end user customer-facing Jeeves app plugs into.

“The way we look at it is really owning the full payment stack,” Thazhmon told TechCrunch.

As with many other fintechs in this space, Jeeves has expanded its scope over time. For now at least, corporate cards — which today make up about 45% of Jeeves’ business — remains its marquee product.

“But we have other channels that are equally as important, and growing quicker, including B2B payments, working capital loans and Jeeves Growth, which is a revenue-based financing product,” Thazhmon added.

As TechCrunch has reported on extensively, the number of startups tackling corporate spend and expense management continues to grow. On Monday, we reported on Ramp raising $200 million and securing $550 million in debt at an $8.1 billion valuation.

“The space is growing and so is the TAM,” Thazhmon said. “More companies are coming online every day and they need spend management.”

But in his view, the winners are going to be the companies that “don’t just compete on credit because then you’re competing on who can give you cash faster.”

“I think it’s when you compete on infrastructure that you start winning, because then you actually own the stack and you can start extracting efficiencies that you can’t if you’re just a provider plugging into the local bank, for instance,” he added.

Thazhmon also theorizes that there will one day be a bifurcation of sorts between startups that are focused strictly on credit and those that are building up the infrastructure.

“What we’re trying to do is to build a bank type relationship with the end user so that if you need payments, we can do that. If you need lending, we can do that. If you need deposits, we can give it to you. If you want to start a company, then you can open an account with us and go to any country with any currency you need,” Thazhmon told TechCrunch.  “What separates what we provide from a lot of players is that we have our own infrastructure layer, and that’s the actual product which connects into the different banking entities in different countries.” 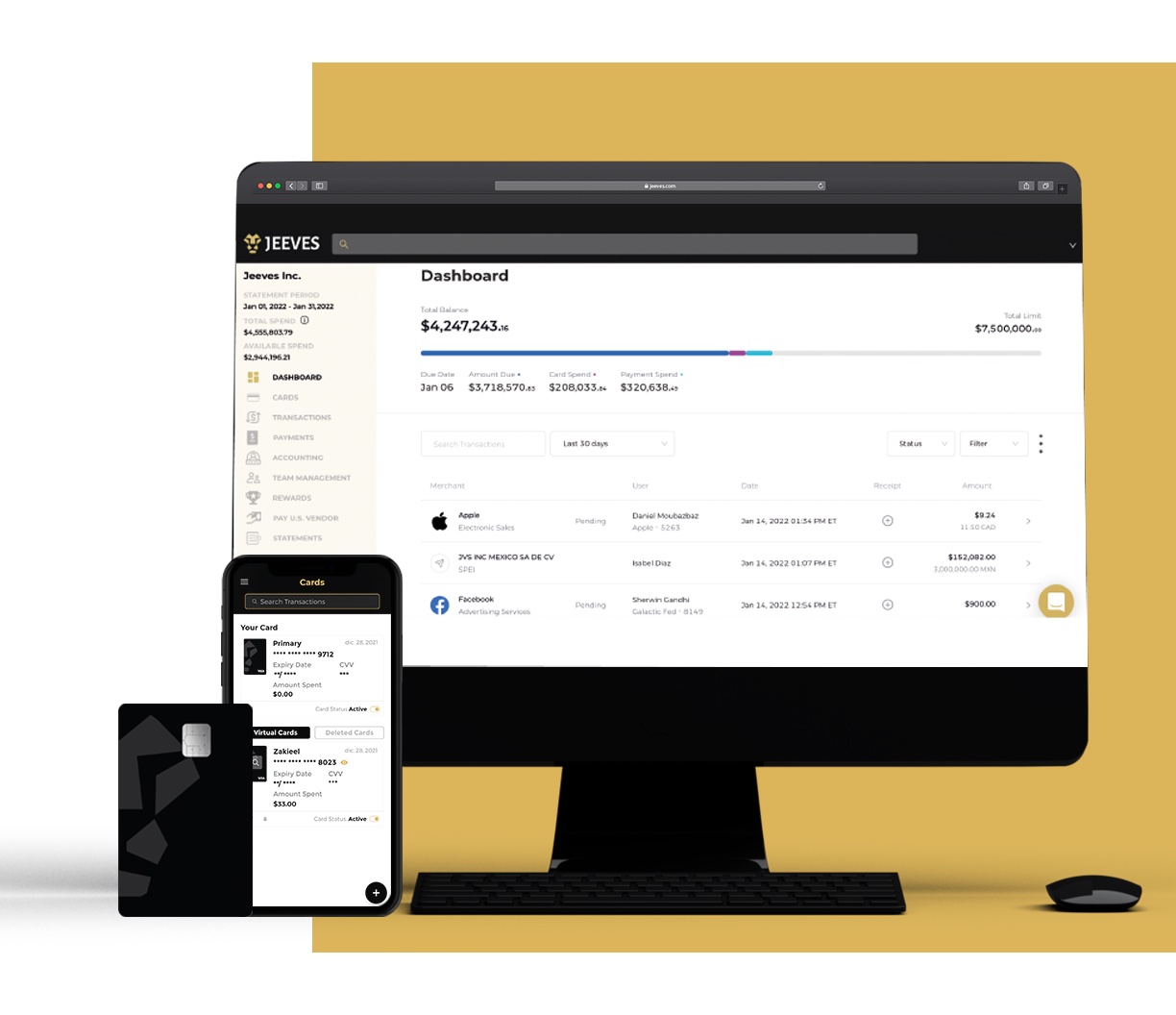 Having said that, he believes there will be plenty of different players for different segments of the market.

“I don’t think this is a space where you’re going to have just one company globally that owns everything,” Thazhmon added. “It’s just massive.”

The company plans to use its new capital toward its expansion across Latin America, Canada and Europe, to scale its infrastructure to cover more currencies, do more hiring and “accelerate the onboarding of new companies to the platform.” Its goal is to cover over 40 countries in the next three years. In the short term, it’s eyeing Southeast Asia, and potentially Saudi Arabia and Africa.

Jeeves – which describes itself as hybrid-remote with offices in Mexico City, London, Toronto and Sao Paulo – presently has 150 employees working across 10 countries. It has recently hired a number of new executives, including: Arpan Nanavati, previously head of engineering at PayPal and director of engineering at Walmart, to serve as its chief technology officer, and Trent Beckley, who was previously lead of strategic partnerships at Google, to serve as its director of partnerships, among others.

A16Z General Partner Angela Strange says her firm tripled down on Jeeves after leading its Series A and investing in its Series B as it witnessed the company “continue to execute extremely well.”

“Jeeves is building the premium financial operating system for global businesses. Starting with credit cards, the company has quickly scaled into local payments, multi-currency reconciliation and working capital loans,” she told TechCrunch. “Jeeves has built a truly scalable architecture where they can plug into each country’s local infrastructure, which not only lets Jeeves provide the optimal user experience in each country, but enables them to scale countries much faster.”