Electrifying a car like the two-door Mini Cooper seems like a brilliant, forehead-slapping, “why didn’t we think of this before” kind of concept, and Mini certainly agrees.

The brand has been toying with the concept since 2009, with the limited run of the Mini E, a program designed to field test the viability and attractiveness of an all-electric Cooper.

Advancements in technology and demand for such a car led to the Mini Cooper SE, a fully electric version of the manufacturer’s stalwart two-door hatch. It’s a first step toward the brand’s recent self-imposed deadline to be fully electric by 2030.

The upshot: The Mini Cooper SE is a jaunty car with the playful performance fans of the brand expect, but sadly — and a bit on the nose — retrofitting a long-in-the-tooth hatchback with an electrified powertrain doesn’t get it very far in 2022.

The Mini Cooper SE is a full battery electric version of the third-generation Cooper or Hatch, as it’s known in other markets, which debuted just two short years ago. The combustion guts of the cheerful two-door have been replaced with its new electrified innards.

The battery sits in place of a fuel tank, cables run through the transmission tunnel and the car’s drive unit occupies most of the engine bay.

In lieu of a standard turbocharged engine, the Mini is fitted with an electric motor powering the front wheels, delivering 181 horsepower and 199 pound-feet of torque.

In comparison to the rest of the Coopers in the lineup, it’s about on par with the Cooper S and its turbocharged 2.0-liter 4-cylinder power plant. Power for the SE is stored in a 28.9 kWh battery, providing the SE with roughly 114 miles of range on a full charge. Mini claims the Cooper SE can charge 80% of the battery in roughly 35 minutes on a level 3 DC fast charger, and as much as 20% per hour on a level 2 charger. Basic home outlets can trickle out 2% per hour. 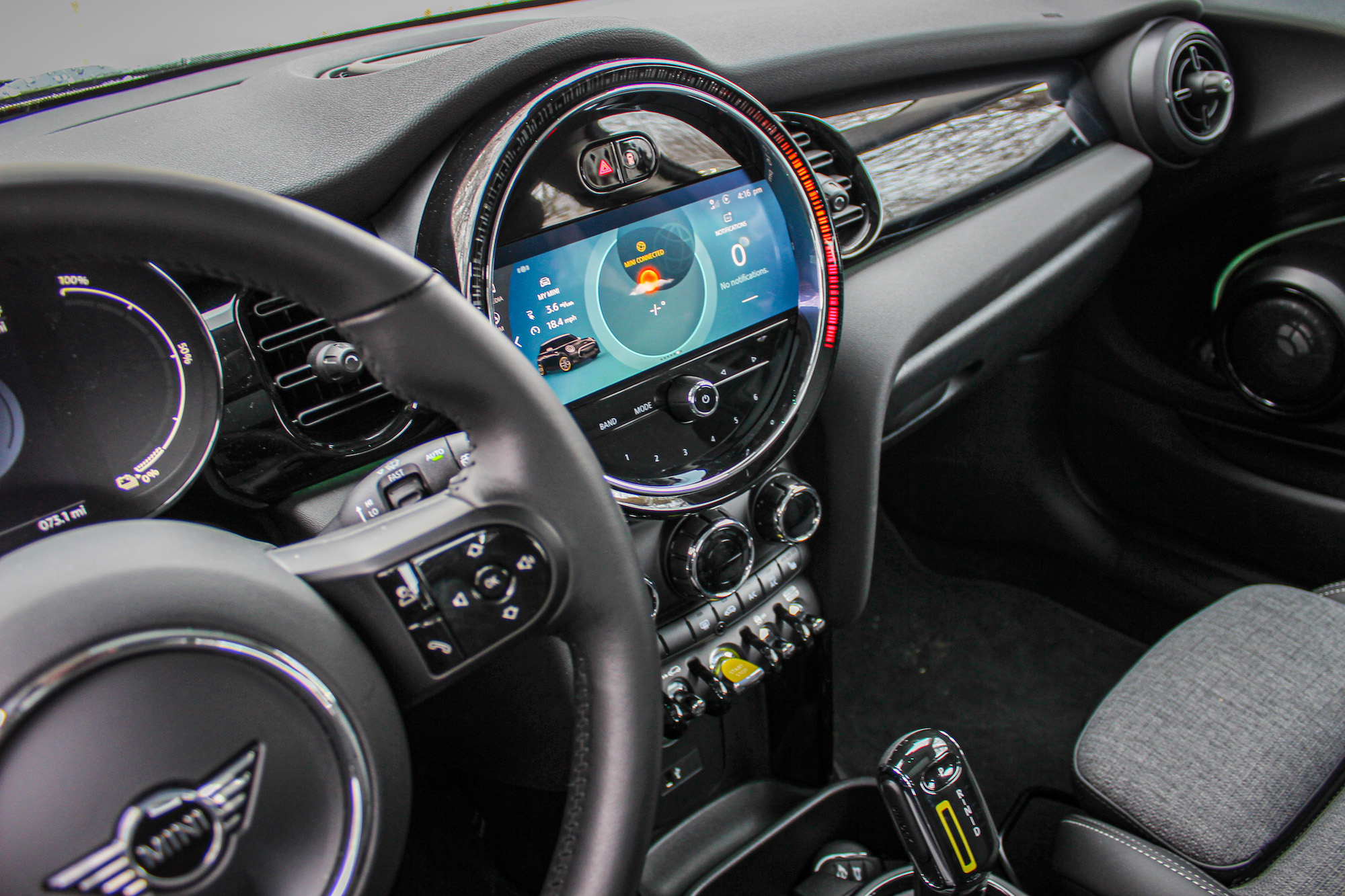 In terms of baked-in tech, the Mini Cooper SE has the basics covered. An 8.8-inch touchscreen is the main interface for drivers and passengers. This houses the entertainment and navigation functions, the latter of which Mini provides with real-time traffic status displays. As one familiar with other cars within the BMW family, the Cooper SE has pages of settings that can be sifted through to customize myriad little functions. Everything is arranged in a “live widget” format, which manifests as big colorful graphics available with a swipe of the finger. If it’s not your cup of tea, Apple CarPlay is available as an alternative.

For safety and driving assistance, there is an adaptive cruise control system as well as lane departure warnings. There’s even forward collision detection that keeps an eye out for both cars and pedestrians.

Since it was redesigned and reintroduced in its current, BMW-produced form, nu-Mini has always been careful to emphasize the spirited dynamics of the Cooper. As such, it’s incredibly driver-friendly in many fundamental ways.

For starters, the driving position is much roomier than it appears to be. The cockpit conforms snugly around the driver and passenger seats, making both positions feel connected to the jovial plaything they’re seated in. For the driver, a simple display sits behind the steering wheel, which avoids clutter by providing the minimum amount of required information. Apart from the current speed, two gauges spell out the state of charge, how it’s being used and if it’s in a regenerative state. Between these two readouts and the ever-changing range estimates, drivers will be eyeballing this for most of the drive, sometimes too much, in fact. Thankfully, the always-on collision detection throws up a bright red graphic on the same display when they are approaching another vehicle, reminding them to look up.

This Mini retains the circular dashboard display that once housed the speedometer. An homage to this unique characteristic of the original Mini, it feels more vestigial than ever in the era of ubiquitous infotainment screens. The 8.8-inch touch screen sits like a square peg in a round hole, with piano black buttons occupying the negative space. The widget UI is appropriately colorful and cheerful, but it’s at the detriment of intuitive navigation. Oftentimes, it’s not particularly clear how to get to a selected function at the cost of precious driving attention.

The rest of the physical inputs are very chunky and substantial, from the aircraft-like switches to the dials for the HVAC. Everything is laid out in a reasonable, functional way and with these, it’s rare that you are searching for that moment’s desired input. This is fortunate, because driving the Mini SE is an active experience. 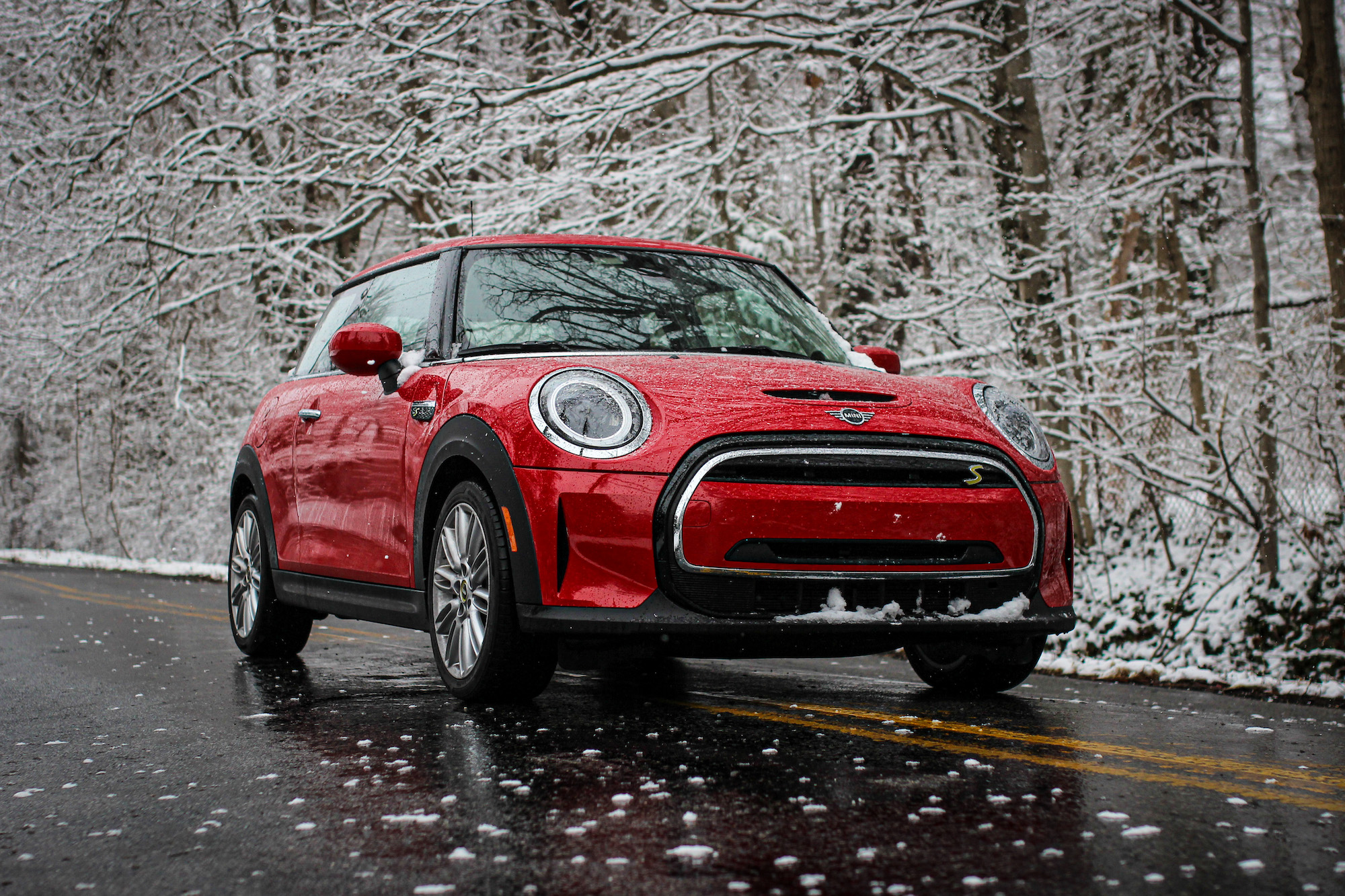 Though not as mini as the Minis of old, the Cooper SE is still a compact, agile car that lays its character on pretty thick while backing it up with sprightly performance. Pair that with the superior torque delivery of an electrified ride and the car darts around enthusiastically like an automotive Pikachu from Pokémon.

Reps from Mini are quick to point out the “go-kart” feel of the car’s handling, and they’re not wrong to do so.

Probably now more than ever thanks to an electrified powertrain, the Cooper’s performance is responsive and never feels like it’s too much of a handful. Its torque is readily available, and though the 7-second zero-to-60 mph sprint time isn’t going to get anyone hot under the collar, its ability to dart into corners or gaps in traffic is commendable.

Rarely does the Cooper SE get out of sorts, and how this lands depends on the individual. Thrill-seekers may desire a little loose-wheel squirreliness, but others will be happy the car stays within its limits.

There are four driving modes baked into the Cooper SE. In its default “Mid” mode, the EV balances efficiency with engagement, providing power when a heavy foot is delivered onto the throttle but otherwise conserving as much juice as possible. “Green” limits available acceleration energy and also softens the pedal’s input, while “Green+” does this while also shutting off some of the creature comforts for maximum power-saving. “Sport” ups the throttle sensitivity while offering up as much power as possible, at the expense of battery power, naturally.

All of this is to say your mileage will literally vary when using these modes. Each changes the dynamics of the car in a very tangible way. There are also two levels of regenerative braking active at all times. By default, the Cooper SE starts in the more aggressive setting that allows for one-pedal driving, but it can be switched to a less effective and more natural setting.

Available modes such as these are commonplace, but the Mini’s 100 or so miles of range greatly influences the driving experience. Due to this limited range, it’s easy to find yourself repeatedly readjusting things.

A typical journey looks like this: Whatever mileage estimate the Mini displays in Mid, it’s always going to be a more attractive and anxiety-reducing one in Green, so you try to cruise in Green mode as much as possible, occasionally switching to Mid when traffic picks up. Sport is always lingering in the background as a very indulgent treat, because it means even a short burst of whimsy costs a precious amount of the dwindling charge. Meanwhile, it’s not uncommon to fiddle with the regen switch to balance out comfort with stretching out the miles.

You’ll hear arguments that people don’t typically drive over a hundred miles a day anyway, which is true, but even with a robust home charging solution, the concern of getting caught short diminishes the enjoyment of the car.

In terms of future EV development, we have an idea of what Mini has in mind, and we know that parent company BMW plans to make Mini fully electric by 2030.

Efforts seem like a slow burn toward a rapidly approaching deadline, but Patrick McKenna, Department Head for Mini Product Planning, gave TechCrunch some insight as to why.

“The specifics of how we’re transitioning is still being formulated, but what we’re focusing on in the coming years is strategic flexibility, the ability to still offer internal combustion and battery electric vehicles,” McKenna told TechCrunch.

“The [Cooper SE] runs on the same production line as the internal combustion F56 hardtop,” McKenna continued. “[This flexibility] allows us to produce the cars right next to each other.”

From a manufacturing standpoint, it makes sense to be in a position to satisfy two different kinds of customers, but this strategy is inherently limiting. Unless there are some advancements to the efficiency of the battery used, the Cooper SE’s largest issue physically doesn’t have room to improve. Since the powertrain was derived from the now-discontinued BMW i3, it’s unclear if this will happen anytime soon.

There’s tons to like about the Cooper SE, especially if you’re into Mini’s style of whimsy. If you’re not, it’s still hard to ignore how well the automaker continues to keep its cars consistently fun to drive.

And yet, the conversion of the existing car to EV and its lackluster range makes it a hard sell, particularly in an era where sporty BEVs with ample battery life aren’t as rare as they were even just a handful of years ago. Mini, a brand that leans heavily on its past to inform its style, may have an all-electric future ahead of it, but its efforts in the present feel a few steps behind the competition.