Over the last couple of weeks, since Russia first attacked Ukraine, we’ve been hearing about loads of tech companies joining businesses from a variety of industries in suspending sales in Russia. It’s been a broad response, and clearly sends a message that companies will not continue to conduct business as usual in the country, but what actual economic impact will these actions have on these companies?

As IDC pointed out in a report published earlier this week, with Ukraine under attack and sanctions being applied to Russia, it will inevitably have some impact on technology companies operating in that part of the world.

“The conflict has halted business operations in Ukraine while the Russian economy is feeling the early impact of Western sanctions. This will strongly affect tech spending in both countries with double-digit contraction of local market demand expected in 2022,” the firm wrote.

Canalys said that tech companies that haven’t shut down sales in Russia are under pressure to do so. “Accenture, Apple, Cisco, Dell, HP, HPE, Oracle, SAP and TSMC (semi-conductors) are among the technology players on a growing list of international companies (across all sectors) cutting ties with Russia. Those that don’t will find themselves increasingly out of sync with global sentiment,” the company wrote in a report published earlier this month.

According to Canalys, Russia accounts for 20% of the European smartphone market and 8% of the PC market. Apple leads the way with 17% of the Russian PC market, sharing that lead with Lenovo. HP is a hair behind at 15%. 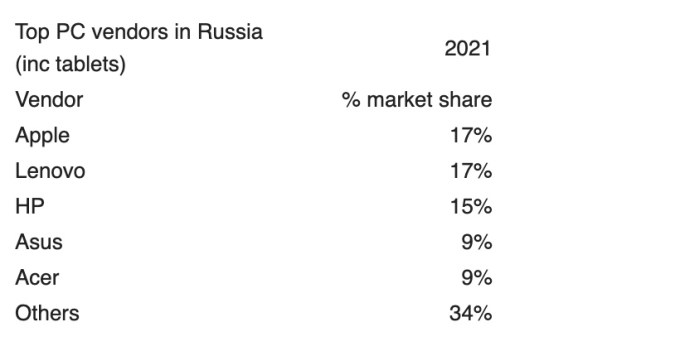 These numbers represented around 2% of overall sales for these companies, according to Canalys. All three market leaders have suspended sales in Russia. It’s worth noting that news reports suggest that Lenovo, a Chinese company, is under pressure from the Chinese government to reverse that decision.

As for smartphones, Chinese smartphone maker Xiaomi leads the market with 31%, followed by Samsung with 27% and Apple well back in third place with 11%. 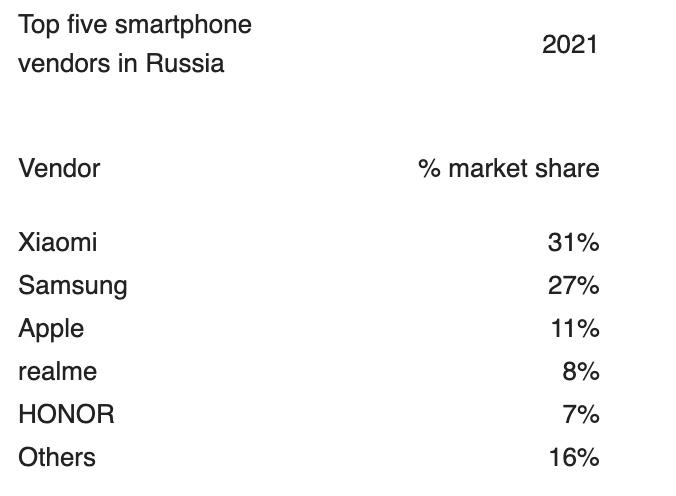 That accounted for 2% of Apple’s overall sales and 4% of Samsung’s. Both Apple and Samsung have suspended sales in Russia.

Canalys speculated that the Russians could turn to Chinese tech to solve this problem. “With sanctions on technology imports imposed by the West, Russia can be expected to turn more to China (which has stated its opposition to sanctions), particularly as the Russian government rushes to replace Western brands and maintain access to key technologies. The winners are likely to be Chinese vendors such as Huawei, that have themselves been the victim of Western trade embargoes,” the company wrote.

As the Lenovo situation shows, however, it’s more complex for Chinese companies that do significant business with Western customers.

As for the big three cloud vendors — Amazon, Microsoft and Google? John Dinsdale, principal analyst at Synergy Research, a firm that tracks the cloud market, said that Russia accounts for a fraction of 1% of these companies’ overall business.

“From the perspective of AWS, Microsoft Azure and Google Cloud, cutting off Russian customers would have little effect,” he said.

But for those customers, it could still be painful. “Of course, for the customers that might be cut off, the impact could be very meaningful. Russia is not a particularly well-developed market, but for companies that have made a major transition to cloud-based operations, then reversing course will be tough,” he said.

Canalys analyst Blake Murray agreed, but said that as with smartphones and PCs, customers left in the lurch by sanctions could turn to Chinese cloud giants. “Overall, it is expected that Russian companies pivot to Russian CSPs like Yandex and Chinese providers that have data centers in the country. They will also look to replace software like Office with Russian-registered equivalents,” he said.

That’s not to say it’s going to be easy, but Murray said many organizations inside of Russia had at least started moving in this direction with migration efforts underway.

You may be wondering about the impact on SaaS companies. Dinsdale said that the SaaS market tends to be more fragmented, with many more in-country options. That said, “Russia is again a small market accounting for less than 1% of worldwide SaaS revenues. For both Microsoft and Salesforce, Russia accounts for less than 1% of their SaaS business.”

Finally, we have internet backbone providers reportedly leaving Russia, with Cogent and Lumen announcing they were shutting down operations this week.

“The business services we provide are extremely small and very limited as is our physical presence,” Lumen said in a statement. “However, we are taking steps to immediately stop business in the region.”

Cogent did not issue a public statement, but it was widely reported that it is ceasing business operations in Russia. It’s unclear what the impact would be, but from Cogent’s network map, it doesn’t appear to have any data centers in Russia.

Amazon, Microsoft and Google have suspended cloud sales in Russia