Twitter has claimed it’s complying with an EU-wide ban on Russia Today (RT) and Sputnik which came into force yesterday as part of the package of sanctions imposed by the bloc on Russia following the invasion of Ukraine, albeit reluctantly.

In a statement the social network has been circulating in response to press requests this week a Twitter spokesperson said:

The European Union (EU) sanctions will legally require us to withhold certain content in EU member states, and we intend to comply. Our global approach outside of the EU will continue to focus on de-amplifying this type of state-affiliated media content across our service and providing important context through our labels. We continue to advocate for a free and open internet, particularly in times of crisis.

However it’s not clear how well Twitter is actually complying with the legal order banning the distribution of RT’s content in the EU.

While some users around Europe have reported encountering an “account withheld” notification if they try to access the Kremlin-linked media outlet’s verified Twitter account since the RT ban came into force (see first screenshot below), TechCrunch found it is still possible to view RT’s account from within the EU — without needing to use a VPN to circumvent the geoblocks (see second screengrab).

Testing Twitter’s implementation in the EU, here’s what a user in France encountered when attempting to browse to RT’s Verified Twitter account: 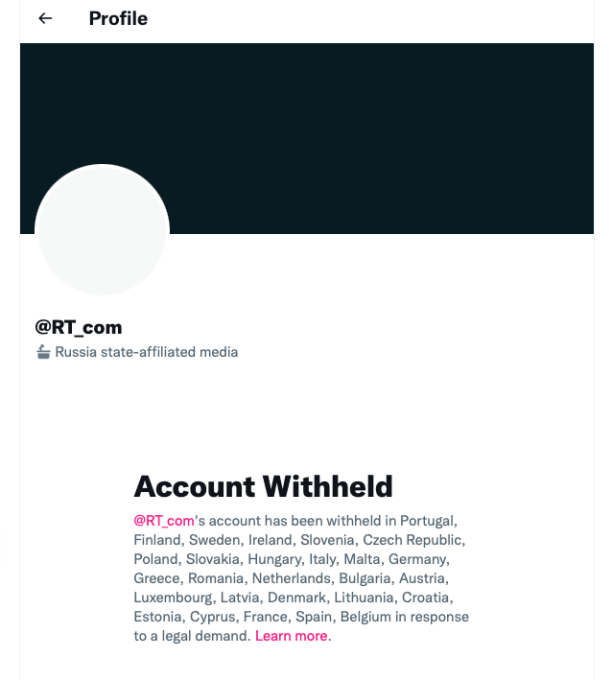 But testing the exact same thing today from Spain we found no block on accessing RT’s account and could also view individual tweets — including the below example which the state-affiliated media entity tweeted out this morning — despite Twitter’s own “account withheld” notice, visible elsewhere in the EU, listing Spain as one of the countries covered by its implementation… 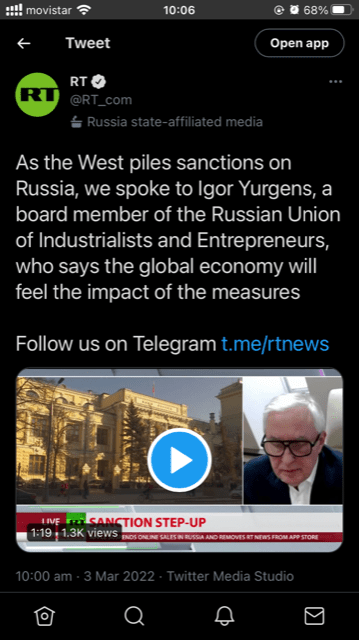 At the time of writing our tester in Spain was still able to access RT from the Twitter mobile app and via the mobile web.

So Twitter appears to be breaching the EU sanction in this instance.

It’s not clear how wide (or singular) a problem this might be with Twitter’s implementation in Spain — or, indeed, across the EU (which has 27 Member States).

Further “leakage” can’t be ruled out. Perhaps especially this soon after the sanction came into force. One interpretation of what’s going on here is that it may be a case of Twitter still ironing out issues with its compliance. (Update: Another, as this reader pointed out, is that the blocks don’t rely on location but user-stated country so can be circumvented simply by the user changing their country in the Twitter settings.)

It is still possible to access RT’s account on Twitter in the U.K., too — but that’s by design as the company has elected for the narrowest possible application in order to comply with the EU ban, and the U.K. is no longer a member of the bloc.

Nor has the U.K. ordered an equivalent domestic order prohibiting RT’s content from being distributed by online platforms — at least not yet; its media regulator, Ofcom, is currently investigating whether RT has been breaching the country’s broadcast code. (Ofcom is also gearing up for a vastly expanded role overseeing incoming internet content rules ahead of the Online Safety Bill becoming law, so will certainly be getting involved in online content moderation decisions in the future.)

The list of countries where Twitter says it’s geoblocking RT in the wake of the EU prohibition also does not include Iceland, Norway, Liechtenstein and Switzerland — which are in Europe, and in the European Free Trade Area, but are not in the EU.

So, again, Twitter is electing for the narrowest possible implementation of a pan-EU sanction.

That contrasts with Apple and Google — which earlier this week both announced they were blocking access to RT’s apps on their respective mobile stores, with Apple doing so in all international markets (except Russia itself).

Google didn’t go that far but it did implement a slightly broader geoblocking than Twitter — also blocking access to the apps in the aforementioned non-EU European countries (U.K., Iceland, Norway, Liechtenstein and Switzerland), as well as EU countries and Ukraine.

On Monday, Microsoft also announced that it was removing RT news apps from its Windows app store, and purging RT and Sputnik content from its Microsoft Start platform (including MSN.com) — in order to “reduce the exposure of Russian state propaganda”, as it put it.

So Twitter’s narrow, EU-only block on the Kremlin-affiliated media outlet is starting to look like an outlier.

That said, the company’s core product is a real-time information service — which explains its general preference for labelling and contextualizing, rather than censoring (and earlier this week it announced extra labels for tweets linking to the Russian media outlets).

Moreover, as Twitter’s statement implies, its network can play an especially heightened role during times of crisis — so having a reluctance to degrade its core utility, even during a war, is understandable.

At the same time, the context in which RT is operating has inexorably shifted with Russia’s invasion of Ukraine. And it’s not clear whether Twitter has reassessed its policies in light of that.

We’re now witnessing a war of aggression by Russia against a sovereign country in Europe — in which foreign-targeted propaganda is playing a key strategic role.

This is why EU leaders very quickly decided that the invasion of Ukraine marked a red line for allowing the continued free flow of Putin’s propaganda through RT and Sputnik, the two main state-affiliated channels which are engaged in foreign information manipulation and clearly attached to his regime.

Nonetheless, Twitter prefers to stay as neutral as it (legally) can, it seems.

Asked about the issue our tester encountered in Spain (an EU country) Twitter declined to provide an explanation of why it is failing to block RT’s content — merely pointing back to its earlier statement when it said it “intend[s] to comply” with the EU sanction.

Pressed further, Twitter’s spokeswoman confirmed: “We have implemented the ban.”

Given that, it looks like the issue we’ve identified is an example of an imperfect implementation of the ban — presumably not an intentional fail by Twitter. And perhaps related to how little time has passed since the ban came into legal force (although the bloc’s president warned it was coming at the weekend).

Considering the company’s long-stated preference for as many tweets as possible to flow, it may also be the case that a flakey implementation of a legal prohibition implies a degree of “feature not bug” to Twitter’s sloppy execution.

We did press Twitter for clarity on the bug. But despite repeated attempts to get straight answers regarding the issue we had flagged, none were forthcoming.

Instead Twitter’s spokeswoman sent us a link to its “country withheld content” (CWC) page — and a pointer to what she described as “the data/explanation from our latest transparency report about which countries are asking us to withhold content and re: what issues”, adding that she “hopes this helps give you a sense of scale”.

The chunk of text she highlighted (see base of post) indicates that there are now 20 countries where Twitter is restricting access to content. So — attempting to read between the lines — it may be trying to suggest that with so many different, country-specific mandates to comply with it’s struggling to execute perfectly.

And ahead of the bloc’s ban on the Kremlin-linked media coming into force yesterday, EU officials did signal that they were expecting a degree of progressivity to implementation of the sanction online, given the challenges of cutting off every last outlet where content might get distributed digitally. (Albeit, blocking verified accounts in specific regions really shouldn’t be that hard.)

Whatever the specific explanation for the issue we found with Twitter’s implementation of the EU’s ban, one thing is clear: It remains all too easy for it to shrug off another policy enforcement failure.