Decipad, a no-code startup that’s aiming to disrupt spreadsheets with accessible tools that empower people to play around with numbers, has nabbed $5 million in seed funding. Put simply, it’s building an interactive notebook to help non-technical people do data modelling.

“We are building for people that lack the technical skill to do cool things with data and numbers but have ideas and expertise that they want to bring to life and share with the world,” says co-founder and CCO Kelly McEttrick, who’s previously clocked time at Facebook and LinkedIn, among other tech industry roles.

She sums up the product as “an interactive notebook to build models easily and quickly for anything and share and reuse knowledge,” and hints at the intended utility when she says: “Coding is just a means to build something. Knowing what to build and what problems to solve is the hard part.”

Asked for a brief description of how the product works McEttrick says users can create a blank notebook and “just start writing or reuse and build upon ideas from other creators” — adding that the idea is to offer “a more human way to write with numbers and interactive no-code elements to achieve more with data.”

Sample use cases cited on Decipad’s website put a little more meat on the bones, saying the product could be used for analyzing climate change, balancing cash flows, exploring crypto and choosing the right mortgage — so it’s targeting a blend of users and use cases, both professional and personal.

The startup, which was founded in January 2021, is offering a beta version of the product currently but says it expects to launch more fully in a few months.

The idea for Decipad was sparked when its other co-founder, Nuno Job, was running YLD, an engineering and design consultancy which worked with a range of businesses.

“That experience really highlighted for me the gap between tools for programmers and everyone else,” he tells TechCrunch. “It was just so complicated for non-developers to meaningfully collaborate and contribute to modern businesses in a data-driven way. They either got stuck in Excel, or needed a developer/analyst to achieve a goal.

“As an open source developer, we create so much knowledge from working together. Outside that, we are still emailing Excel files, hoping they work and then answering a bunch of questions to explain what they mean; ‘can you explain this Excel sheet to me’ is unfortunately a common, accepted practice.”

There has of course been a veritable “Cambrian explosion” of no/low-code tools in recent years — and Decipad sits firmly inside that trend. But McEttrick also points to the emergence of notebook-based data programming tools, such as Jupyter Notebooks — which have been adopted by data scientists and open source communities “to create powerful insights and collaborate more effectively with numbers.”

“These tools require expertise in programming languages like Python that can take years to learn, and even longer to master,” she adds, emphasizing that Decipad’s team wanted to build something a whole lot more accessible.

Given that broad reach, the startup is intentionally not targeting the tool for any specific use case — which sets it apart from the (equally extensive) wave of SaaS startups now going after particular business needs or niches (such as regulatory compliance).

McEttrick also confirms Decipad will offer a free and paid version of its forthcoming product, so it sounds like it’s planning a freemium business model to maximize access.

“We are intentionally taking a more generalist approach,” she confirms, adding: “With today’s access to data, the rise of no-code and a shifting culture toward creating in the open, we see an opportunity for a new, more modern approach to data analysis and knowledge collaboration that can’t be fragile to specific use cases.

“We intend to be the canvas for people’s imagination with numbers and empowering people and teams to create content that will drive value for other. We are not specializing on demand.” 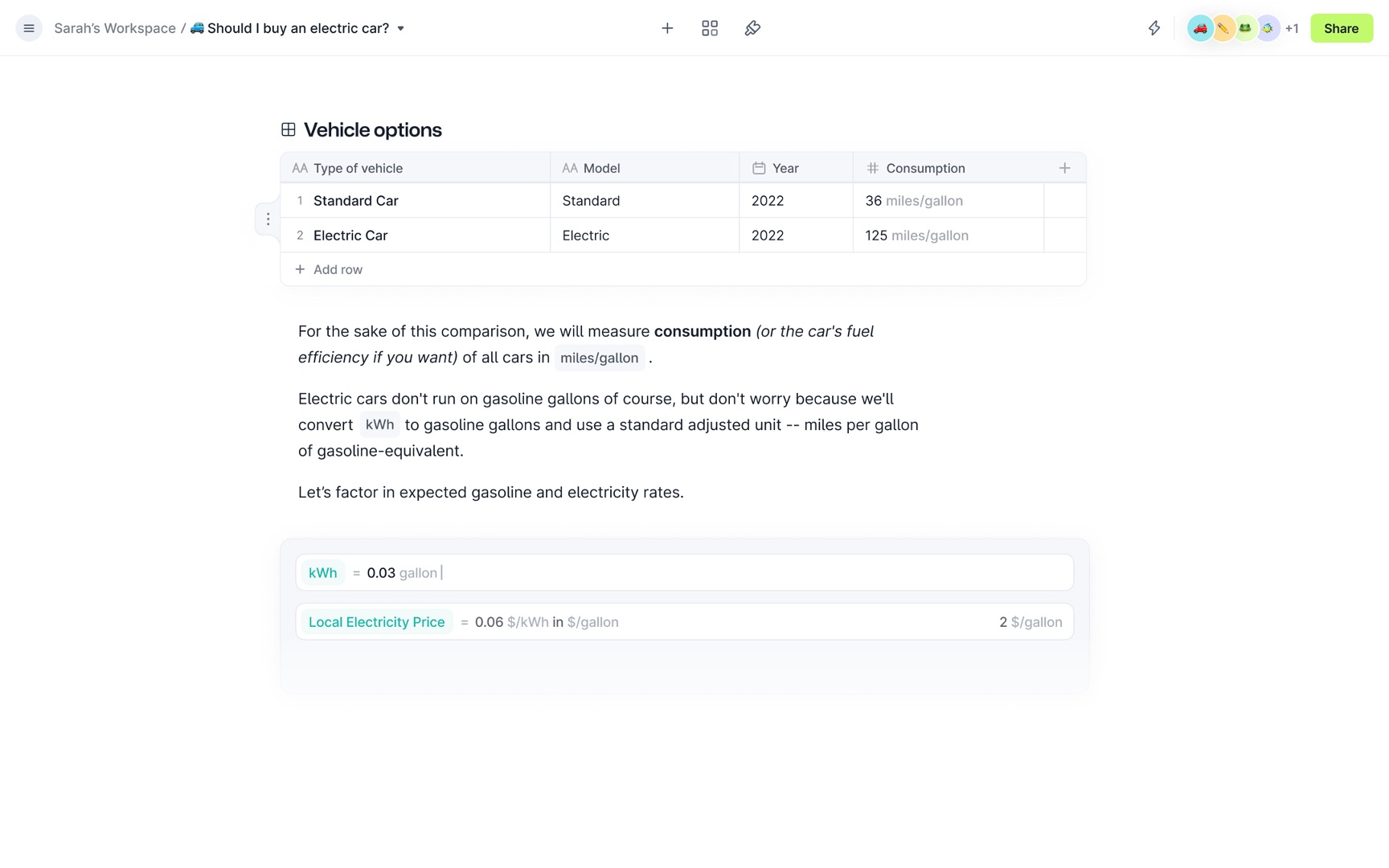 She also argues that the current way humans approach analyzing numbers has been fragmented across multiple types of spreadsheets and/or vertical apps built on top of spreadsheets — exactly to do specific stuff like financial planning. “But, nothing has really stuck. We think the focus is upside down. It’s not about the use cases for specific customers. We see ourselves as a service enabling communities and businesses to create value through what they create on Decipad, not a vertical SaaS tool.

“From sales forecasting to analyzing vaccination rates to exploring crypto, we are giving people a flexible canvas to shape and express their world views in a data-driven way that other people can understand, build upon and reuse.”

McEttrick also talks in terms of Decipad wanting to empower the “modern creator” and enable “the future of work.”

“We believe people should be able to monetize the things they build on Decipad and the data-driven knowledge they share,” she says, hinting at a platform or even marketplace component to the business model (although she declines to discuss specifics).

“We believe the next generation of software is about digital ownership, and about the rise of the consumer,” she adds. “We are empowering users with tools that are easier and more intuitive to use but also connected to a community for shared learning and advancement.”

On the competition front, as well as obvious spreadsheet giants like Excel and Google Sheets, Decipad suggests it’s competing in the work productivity space with tools such as Notion or Airtable — saying it wants to be thought of as a kind of “Notion for numbers.”

The seed round was co-led by Entrée Capital and Target Global, with participation from Flybridge Capital, Founder Collective, Shilling VC, Angel Invest Ventures and some unnamed angel investors (from companies including Airtable and Auth0).

Commenting on the funding in a statement, Avi Eyal, managing partner at Entrée Capital, added: “I am most excited about the role Decipad is playing in the future of work. It is crucial that more people and teams become data active to accelerate better decisions.”