Mundi, a financial services platform for cross-border trade, announced today it has raised $16 million in a Series A funding round led by Union Square Ventures.

The investment marks Union Square Ventures’s first B2B investment in Latin America, according to partner John Buttrick. The New York-based firm has also backed the likes of fintech giants such as Coinbase and Stripe.

The equity financing comes after Mundi secured a $100 million warehouse line from Silicon Valley Bank, and brings the startup’s total raised to $125 million in debt and equity since its 2020 inception. While it is remote-first, Mundi does have operations in Mexico City.

The startup built its platform from scratch with the goal of underwriting SME exporters in Mexico. It works by offering them working capital by paying them upfront so they don’t have to wait 30, 60 or 90 days to get paid, noted CEO and co-founder Martin Pustilnick.

“This eliminates the risk of nonpayment by international buyers,” Pustilnick said. “Plus, customers are seeing their exports increase by 30% on average six months after working with us” because they have the capital they need to take on more orders from existing clients and take on new ones, Pustilnick added.

Mundi was founded in January 2020 and launched in July 2020. From December 2020 to December 2021, the company says it grew monthly TPV (total processed value) 25x YoY and processed over $120 million in invoices for its customers.

“SMEs have major financial risks when trading internationally: lack of working capital, currency exposure and non-payment,” he said. “We are committed to reducing the barriers to cross-border trade so companies can focus on selling their products and services.” 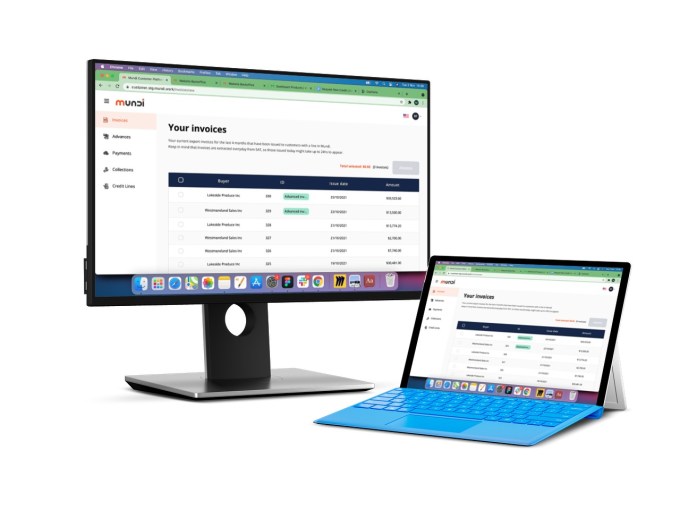 Mundi plans to use its equity to invest in launching new products, “aggressive” hiring and toward customer acquisition and retention. The debt capital will go toward underwriting SMEs. The startup currently has about 130 employees, most of which are remote.

Last year, we covered the $20.5 million fundraise of Nuvocargo, a logistics startup out to help simplify the challenges of cross-border trade. Pustilnick said Mundi views that company as more of a potential partner than a competitor as the former is more focused on logistics and Mundi on financial services.

“We partner with multiple logistics players to offer services with them,” he added.

Mundi soon plans to launch a new product line, FX, focused on multi-currency management with forward contracts and spot exchange rates. Those new financial services are designed to allow its customers to protect their operation against currency fluctuations and will be available in real-time through Mundi’s web-based platform.

Pustilnick described FX as “the first 100% digital offering in LatAm that allows companies of any size to lock in currency exchange rates up to one year in advance.”

Union Square Ventures’ Buttrick, who has joined Mundi’s board as part of the investment, believes the company is providing “important” digital financial products and software “that will materially reduce trade barriers and costs to SMEs that seek to sell their products internationally.”

Rexhi Dollaku, partner at Base10 who led the prior round, said his firm is excited about “how big the opportunity to modernize trade finance is, as well as Mundi’s stellar team.”

The round also included participation from Upper90, FJ Labs, Base10 Partners, Exor, AndBank, Alleycorp, Operator Partners, Gilgamesh Ventures and the Mexican bank Monex along with executives from Brex, C2FO, Wisetack and Addi.