Today, if a hematologist wanted to dive into the exact organization and structure of your blood cells, they’d probably need a microscope in a lab. Scopio, an Israel-based startup that just closed a $50 million Series C round, argues that soon, a lot of that work could be done with nothing more than a laptop.

Founded in 2015, Scopio is an imaging company looking to re-imagine a common blood test called a peripheral blood smear. In essence, that’s a test where a doctor, usually looking to understand an anomaly in a blood cell count, literally takes a look at your blood cells. That process involves placing a smear of blood onto a slide, and examining the shape, size and structure of certain cells using a well-trained eye.

Scopio has developed a scanner, called Scopio100x, capable of imaging that whole blood sample, while maintaining the ability to achieve 100x magnification. The result is a zoomable, digital image that CEO and founder Itai Hayut argues will allow peripheral blood smears to be done remotely, and bring down the costs of these procedures in the first place. Once samples are scanned in the lab, they could be reviewed by hematologists working from anywhere.

You can zoom around in one of the images here.

“We’ve seen lines of people in hematology labs leaning over microscopes, in some cases, using a manual clicker to count cells,” Hayut told TechCrunch. “We thought this is just a perfect example of how computer vision tools can assist the experts, and get better results much quicker.” 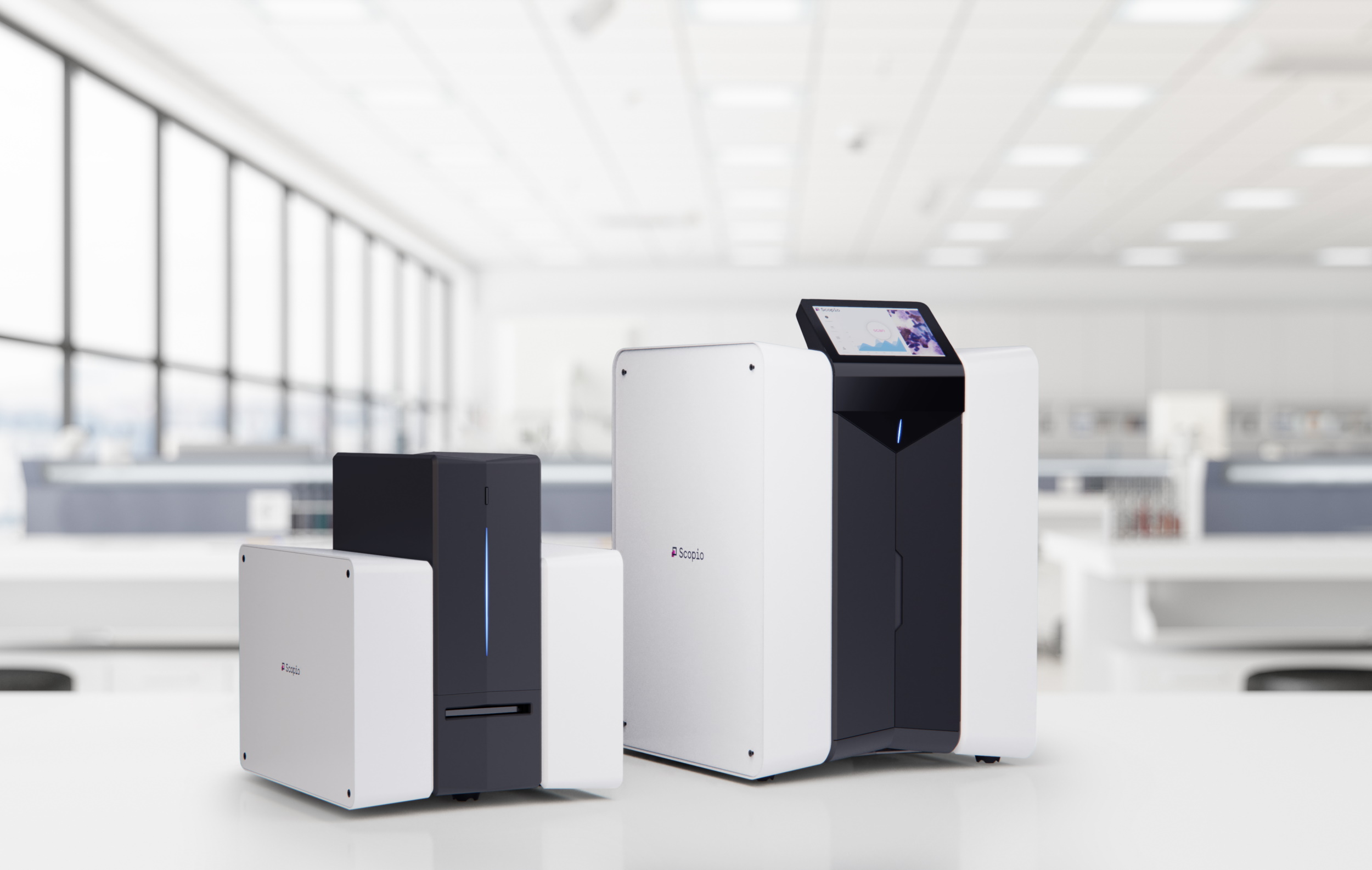 Peripheral smear blood tests are part of a battery of different assessments that can be used to identify blood diseases. But these days, they’re not the first-line option, in most cases.

If your doctor is concerned you might have a blood-based disease they might first order a complete blood count. Those tests are done almost entirely autonomously: an analyzer will count out different levels of blood cells types in your body, and give the doctor a rough idea of how much of each type of cell is present.

If those tests present anomalies, a doctor might want to see the samples for themselves. In that case, they’ll perform a peripheral blood test to examine cell size, structure and look for indicators for a specific disease.

There has been evidence that the peripheral blood smear landscape has some big pain points. For instance, some papers argue, the manual review of samples doesn’t often add much to doctors’ diagnostic dataset. One paper published in 2020 in Diagnostic Pathology, for example, found that just 23% of 515 peripheral blood smears ordered across three medical centers added clinical value.

That paper doesn’t necessarily mean the technique itself is extraneous; the authors do add that efforts to make the process more efficient are probably warranted.

Plenty of other papers confirm that the peripheral blood smear isn’t likely to fall by the wayside. Some 15% of analyzer tests are still referred to hematologists for a blood smear to confirm findings. And, on a less scientific note, some researchers see the ability to divine diagnoses from blood cells as something of an art.

In short, it seems like we’re still going to have to manually look at blood cells to confirm diagnoses for the time being. And other companies have already looked to develop imaging tools that can make that manual review faster, and more automated. For example, two major companies in this space already are Cellavision and Sysmex, systems which are responsible for most of the peer-reviewed studies in this space, per a 2019 review paper.

In some ways, the fact that this tech already exists works in Scopio’s favor, because research already suggests that cell-imaging systems have benefits to offer, and scientists are already familiar with them. Namely, these systems allow for remote review (though about 10-20% of samples still need in-person confirmation), reduce eyestrain, can lower labor costs, make it easy to archive and retrieve blood films and make good teaching tools. 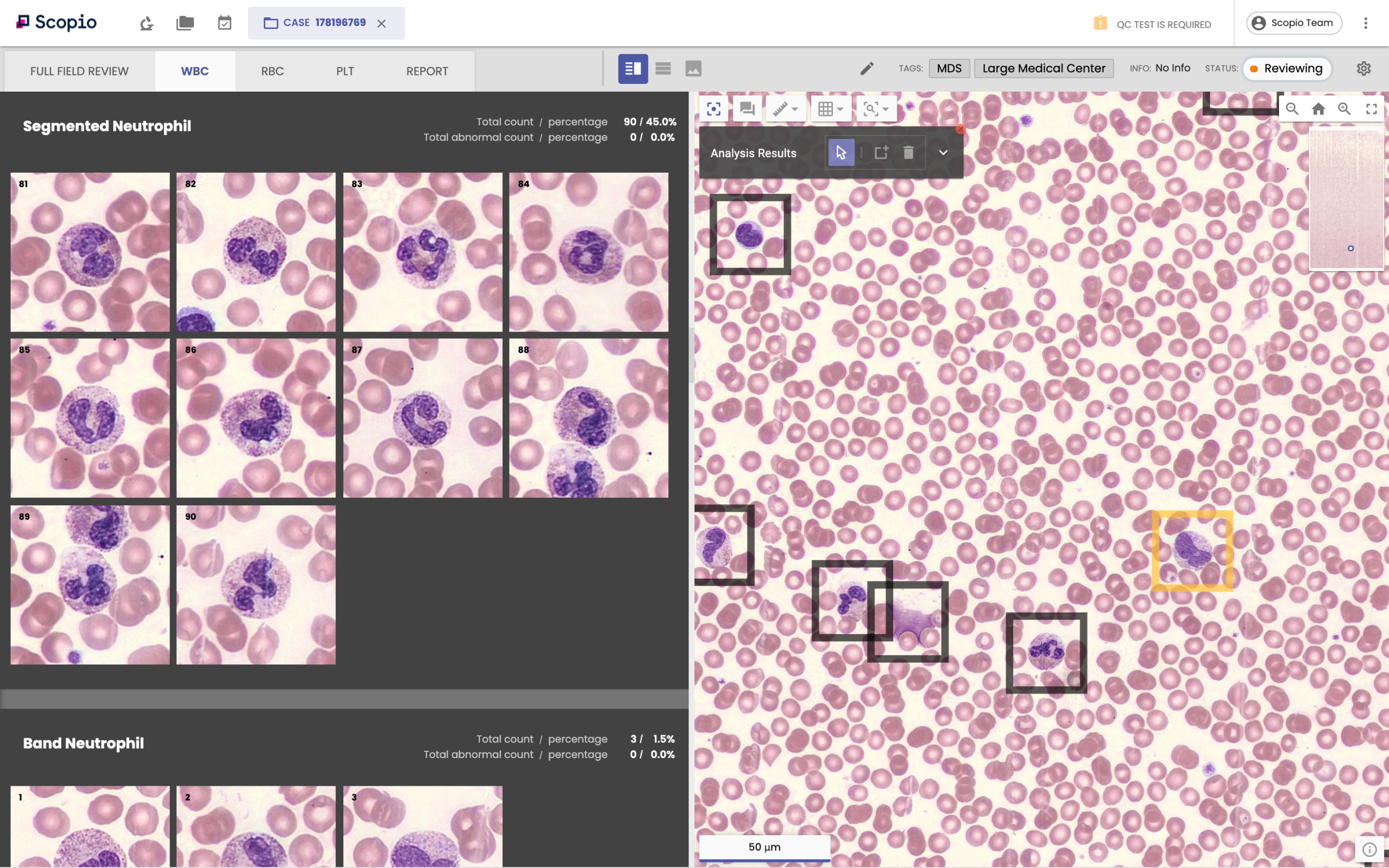 Hayut argues that Scopio can represent the next generation of this technology because the company appears to have found a niche within that world: The existing imaging tech doesn’t capture the entire slide.

To attain greater magnification, the breadth of the image is compromised. Think about what it’s like to zoom in on something using a camera lens: the field of view gets smaller. In this case, that means only portions of the slide are scanned and displayed, said Hayut. Independently published papers have confirmed this idea.

“Scopio is the first company in the world that managed to break the trade-off between field of view and resolution,” Hayut said. In short, they’ve managed to capture the whole slide and still achieve up to 100x magnification, in line with what’s needed to perform a peripheral blood smear.

The ability to scan the entire slide leads to the second half of Scopio’s pitch: that “two orders of magnitude” more visualized and digitized cells means that more applications can be developed around them. In essence, Hayut said this will allow new algorithms to learn more from the peripheral blood smear in the first place.

Scopio, like several of the other major players in this space, has been investing in getting certain clinical decision-making algorithms FDA approved. (Think of this like support software that helps a hematologist distinguish between cell types.)

In October 2020, the FDA approved a clinical support system from Scopio that classifies cells, and allows a hematologist to review those automatic classifications, through the 510(k) new device pathway. (It was granted approval through this pathway because the classification process was substantially similar to an equivalent already on the market.)

The company has also recently completed a clinical study on an application intended to assist technicians with review of bone marrow aspirate — samples usually used to scan for conditions like leukemia, multiple myeloma or anemia. The data on that study has yet to be published, but the company plans to file for FDA approval of another clinical decision-support system targeted at bone marrow aspirate analysis in March.

As for the Series C funds, the company has a singular focus: commercial delivery. The company plans to expand the commercial team in Europe and the U.S., and attempt to make inroads into clinical labs (Scopio’s core client).

This Series C round brings Scopio’s total funding to $85 million. The round was led by OurCrowd, and an unnamed strategic investor. It includes new investors Mizrahi-Tefahot Bank Invest, Ilex Medical and existing investors Olive Tree Ventures and Aurum Ventures.