We were bullish on fintech when we launched the Matrix Fintech Index in 2017, but even we underestimated the magnitude of the growth to come. Fintech tailwinds, strengthened by the COVID-19 pandemic in 2020, only accelerated in 2021. And despite public markets’ rocky start in early January, we’re confident that 2022 will be another banner year for the sector.

In this year’s edition of the Matrix Fintech Index, we’ll look at the performance of public fintech versus the broader market in 2021 and reflect on the private fintech market’s red-hot year. Then, we’ll turn our attention to the year ahead and offer some predictions for fintech in 2022.

Fintech continued to outperform the market by 3x

Despite a roughly 30% draw-down in the last months of 2021, the Matrix Fintech Index continued to beat the broader market as well as incumbent financial service companies. Fintech’s consistent outperformance signals that the changes brought about by COVID-19 – including shifts toward e-commerce, online payments and digital interactions over physical ones – are here to stay. 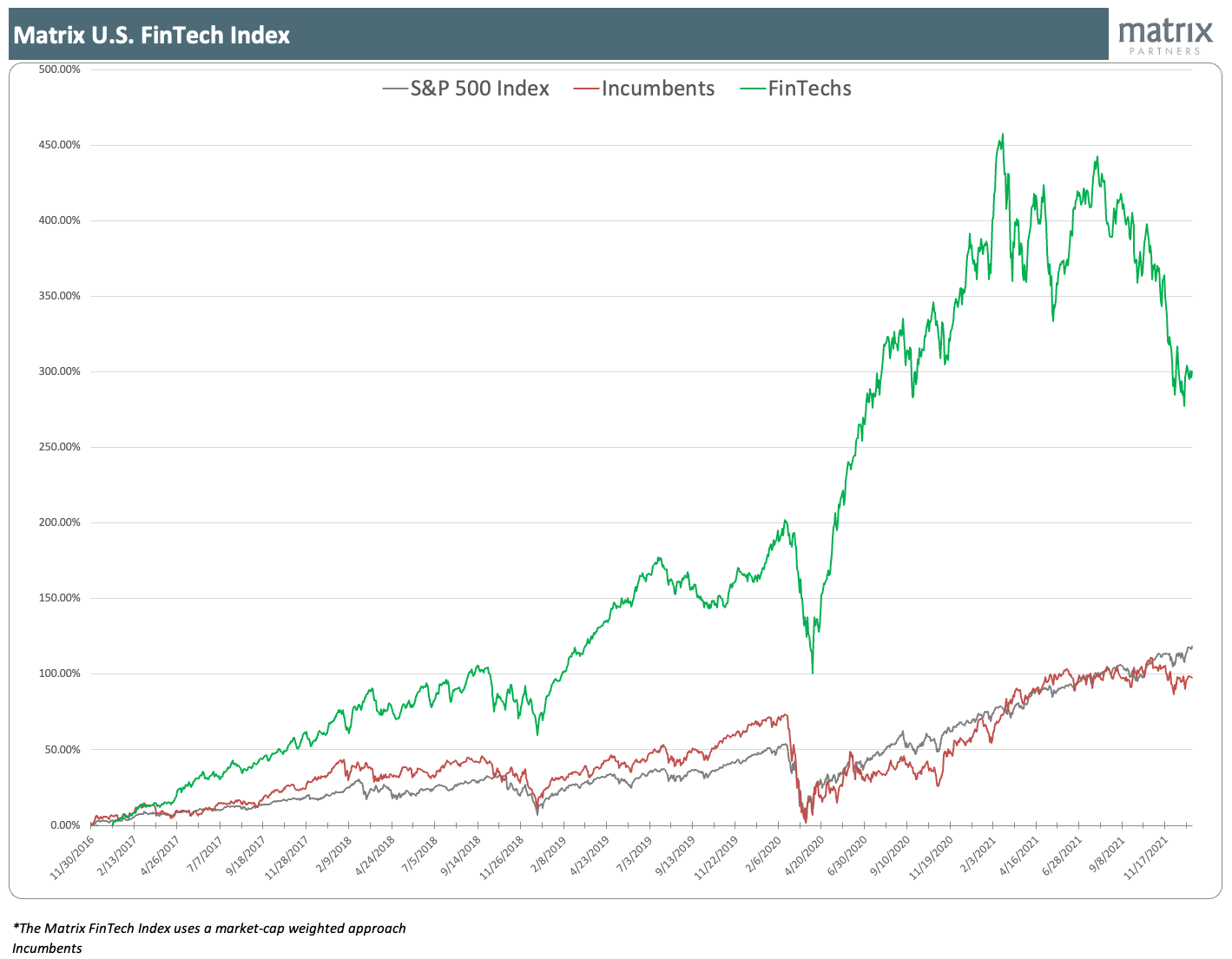 January 2022 opened with shaky markets and signs of multiple compression, but we believe this year will set another record with at least $300 billion in fintech liquidity.

A great year of public debuts

Last year was outstanding for fintech IPOs, with notable debuts occurring across several categories. Consumer companies such as Coinbase ($86 billion) and Robinhood ($32 billion), infrastructure players such as dLocal ($6 billion) and Marqeta ($15 billion), and insurtech providers such as Lemonade ($1.6 billion) all entered the public market.

There was also increased diversity in the way these companies went public, with some fintechs skipping the traditional IPO process altogether. More companies, such as Coinbase in the U.S. or Wise in the U.K., chose direct listings, while Robinhood earmarked $700 million in shares for its existing customers.

Others, including Hippo, Metromile and SoFi, chose to go public via SPAC. While SPACs’ track records have been mixed, even accounting for recent market volatility, the rise of IPO alternatives is a welcome change for the growing ranks of late-stage fintech unicorns.

A record year with 151 new unicorns

Private markets followed public markets in making 2021 a record-setting year. VC funding into private fintech companies crossed $134 billion in 2021, rising by 177% from a year earlier, according to Crunchbase.